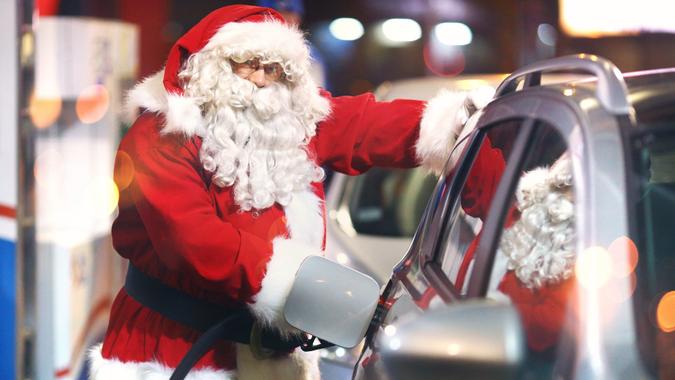 Unless you find your own personal gasoline pump under the tree this year, you may end up paying higher gas prices this Christmas holiday than you ever have before. Even as gas prices continue to fall across the United States, there’s still a chance that prices could set a new holiday record this year.

Compare: 5 Luxury Cars That Will Only Go Up in Value
Explore: How Will the Omicron Coronavirus Variant Affect Gas Prices?

The national average price of gasoline has fallen 10 cents per gallon since Thanksgiving, according to GasBuddy, a fuel savings platform. That average is projected to keep dropping to $3.25 per gallon on Christmas Day, which is just a penny shy of the record Christmas high set in 2013.

Even with the recent decline in prices at the pump, they are still historically high. For the year, the average price is up 45% from 2020’s $2.25 per gallon. The good news is, GasBuddy expects prices to keep declining in 2022.

“We got a Christmas gift that few should complain about: falling gas prices at a time of year when millions of Americans are spending their hard earned dollars on gifts for their loved ones. The last thing they should have to worry about is expensive gasoline,” Patrick De Haan, head of petroleum analysis at GasBuddy, said in a press release.

The Year in Review: Cars, Electricity and the Other Areas Hit Hardest by Inflation in 2021
Learn: Toyota To Roll Out 30 Electric Vehicle Models by 2030, Upping Investment to Nearly $18 Billion

If you’re looking for ways to find cheaper fuel, here are some tips: