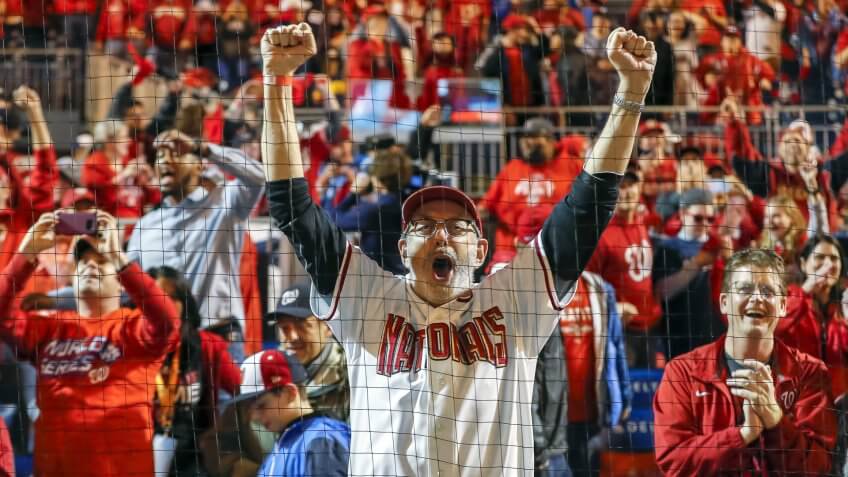 Major League Baseball is in the middle of a fan-shortage crisis — ballpark attendance has dropped by 7% from the start of the 2016 season to today. Part of the cause is a glut of terrible teams, but the chief reason for empty seats is cost. It gets more expensive every year to take in a game. If you feel like you no longer can afford to take your family to a game because the tally reads more like the cost of a mini-vacation, you are not alone. Find out why a day at the stadium costs so much and what you can do to lighten the burden. 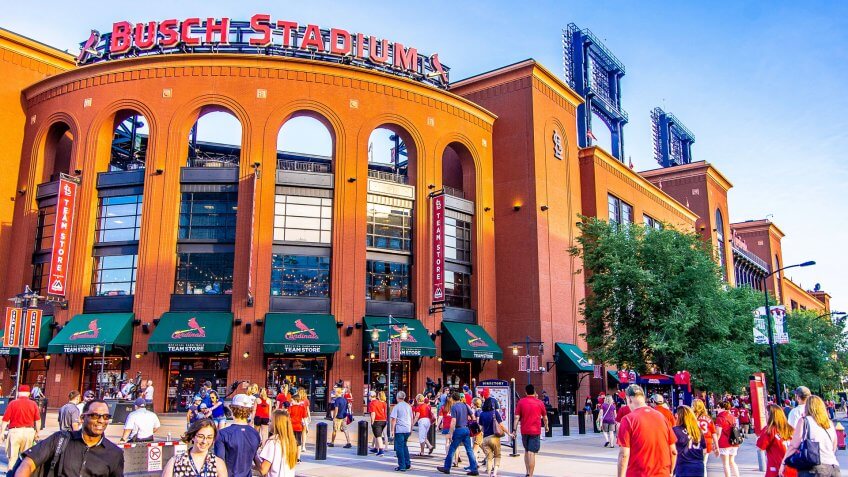 The MLB Fan Cost Index calculates the average price for four people to see a game at any given ballpark. It includes the cost of four tickets, parking, four hot dogs, four small soft drinks, two draft beers, two programs and two of the stadium’s least expensive hats. Across all 30 teams, a family of four can take in a game for less than $200 at only seven stadiums. 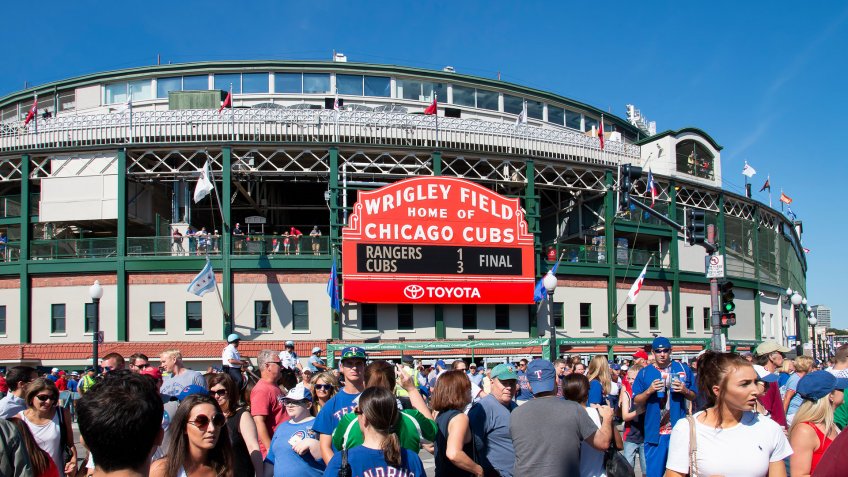 Among 30 MLB teams, the average ticket now costs $65. Six teams charge more than $90 per ticket, and a ticket to see home games for three teams — the Chicago Cubs, New York Yankees and Los Angeles Dodgers — runs into the triple digits. And that’s just for the average seat. 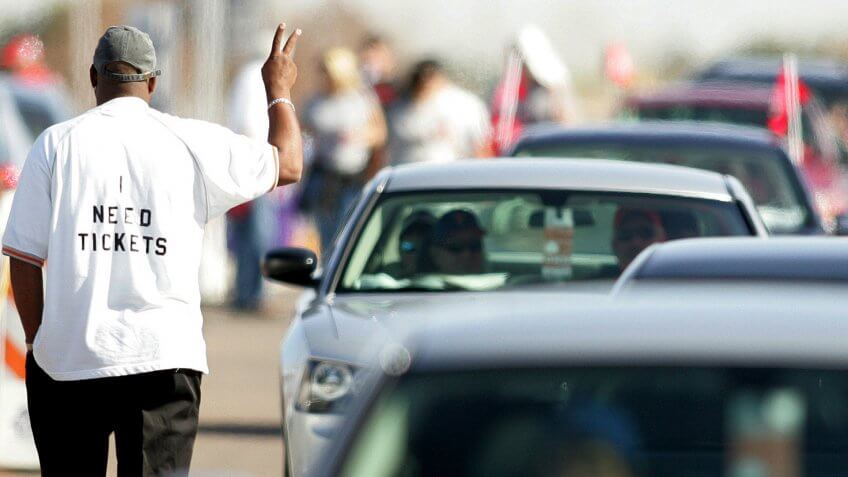 If you find yourself at the sold-out stadium with no ticket, desperation might compel you to resort to buying from a scalper. First of all, this almost always is illegal, at least if the scalper isn’t a set number of feet away from the stadium when you make the transaction. Next, you’re always going to pay more — sometimes much more — as scalpers aren’t in the business of selling tickets at face value. Finally, there’s a chance the tickets you’re buying are stolen or counterfeit. 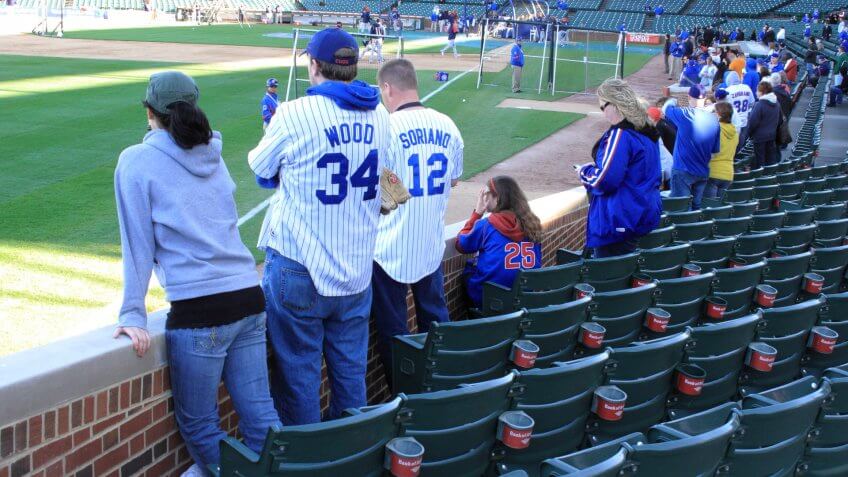 If you want to look just like the big boys on the field, it’ll cost you. The average officially licensed MLB jersey now costs $125.32. If you want something retro, customized or otherwise fancy, expect to pay even more. 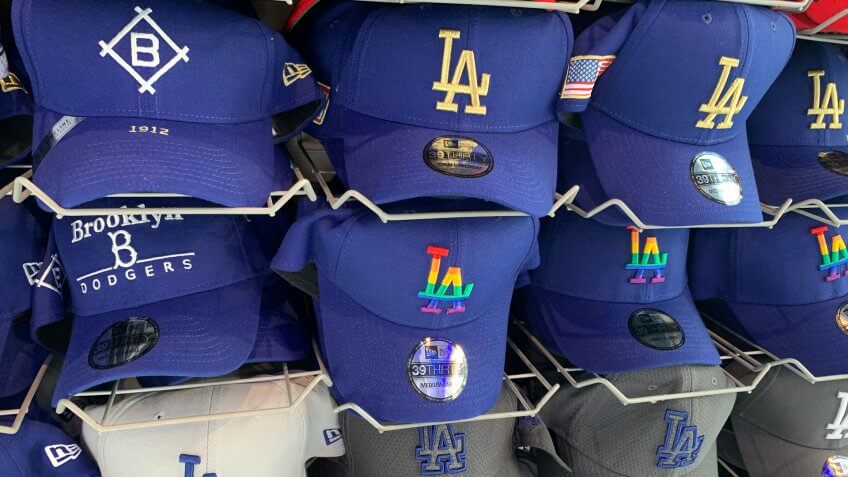 Jerseys long have been known for being expensive, but even if you want to leave the game with a just regular old ballcap, you can expect to add a pretty penny to the cost of a game. The average price of a cap at the ballpark is $16.48. 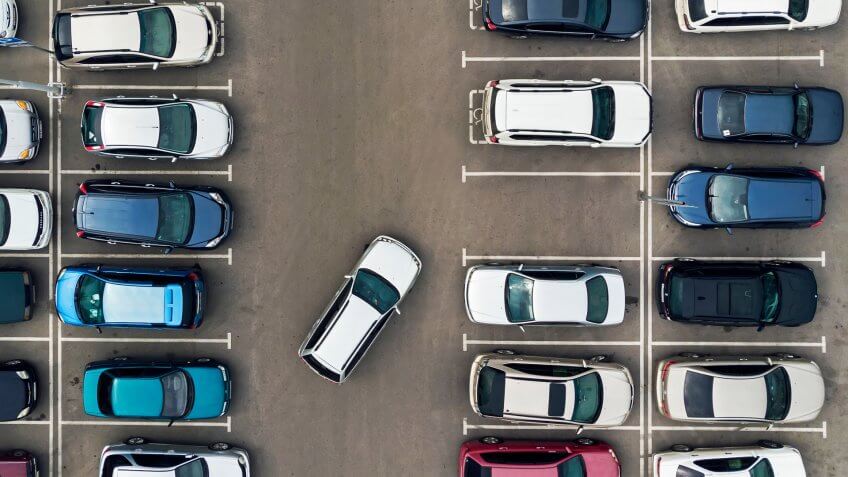 If you drive to the game, you’ll be reaching for your wallet before you even walk into the stadium. The average cost of renting 200 square feet of pavement for the duration of a ballgame has gone up to $16.32.

To Pay For These Games: 20 Ways To Save Money Fast 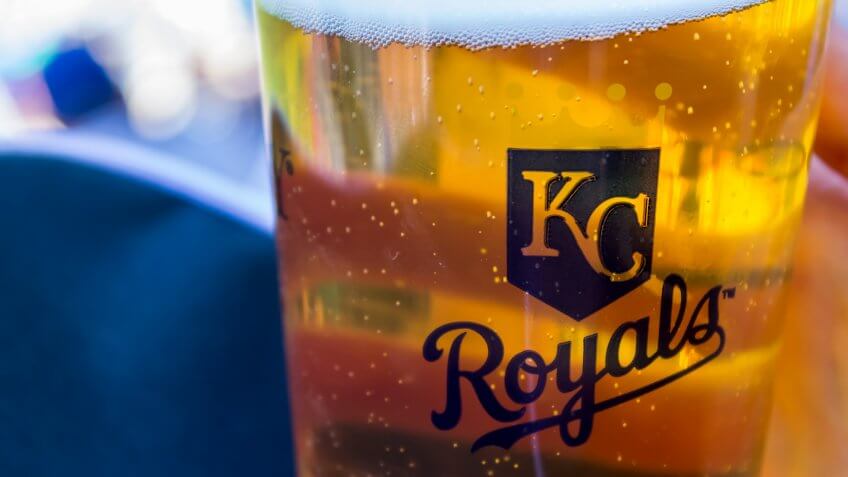 If you’re planning on tossing back a few drafts while you watch, keep in mind that beers now cost around six bucks — $5.90, to be exact — and, of course, it’s customary to tip the server. 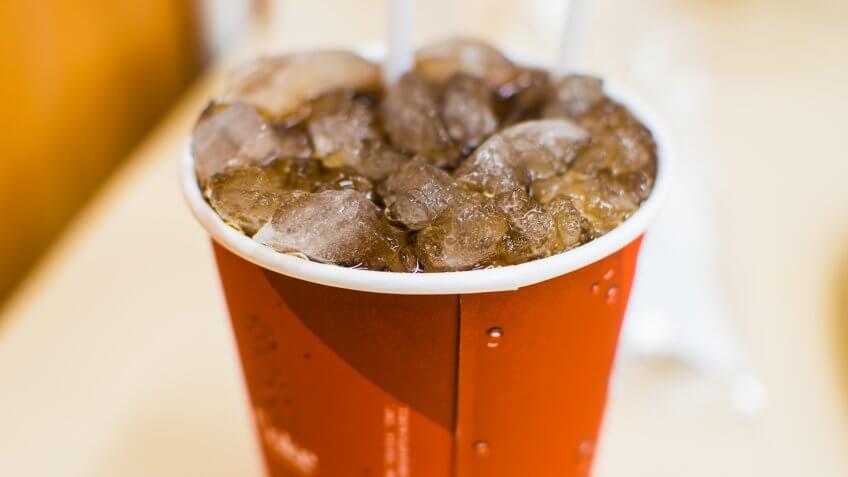 If you abstain from beer and instead opt for a soda, there’s still no such thing as a cheap, drinkable liquid at a baseball game. Even a soft drink is now $4.13 at the average ballpark. 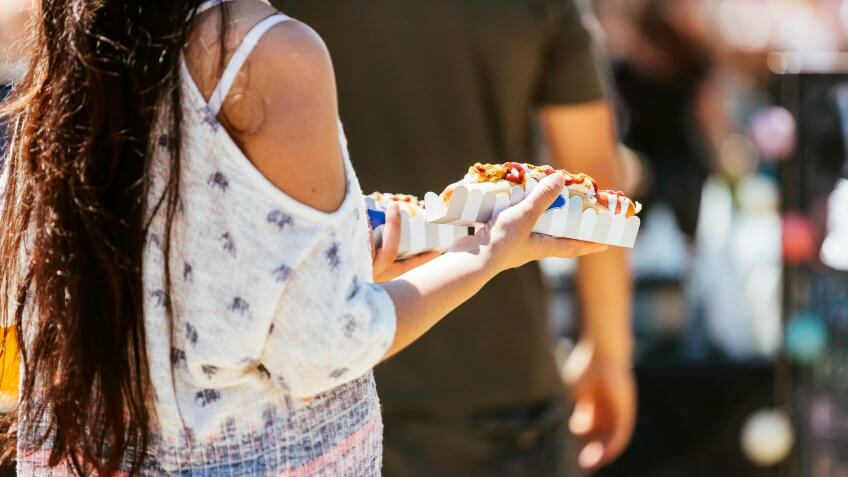 Hot Dogs Cost As Much As Drinks

The average hot dog on a bun will run you $4.52. At 19 ballparks, however, you’ll pay $5 or more. Eight stadiums charge at least $6, and a hot dog at a Washington Nationals game will set you back $7. The reigning World Series champs dish up the priciest dog in baseball. 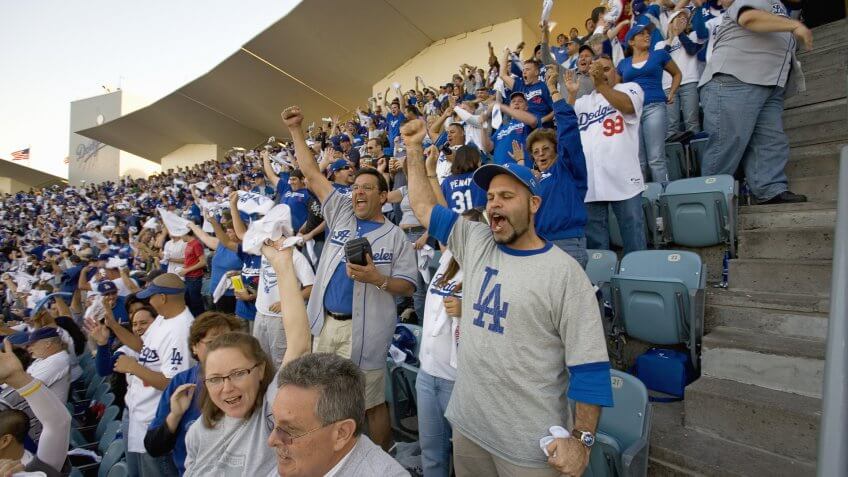 Some Teams Control the Secondary Market

Some teams have gone to great lengths to muscle independent brokers out of the secondary ticket market, which often leads to higher prices for fans. A recent report from the Los Angeles Times showed that the Dodgers stopped brokers from buying season tickets, thereby cutting out the middleman and gaining control over every ticket to every game. The team then used its website to steer fans without tickets to one of their “trusted team partners on the secondary market.” The Dodgers are not the only team to do this, but they are facing a lawsuit because of it. 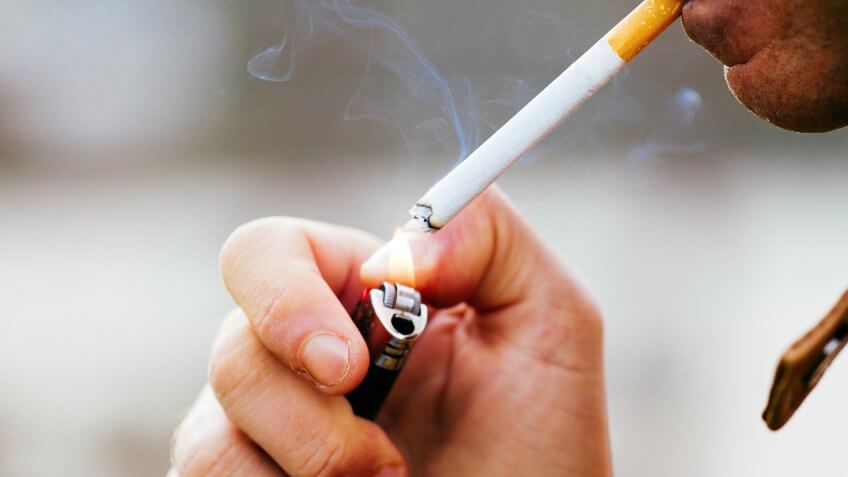 A Cigarette Could Cost You $250

Many cities have instituted strict laws that ban smoking within a wide perimeter of the stadium. If you try to sneak a smoke and get caught, you could earn yourself as much as a $250 fine — and that’s just for a first offense. 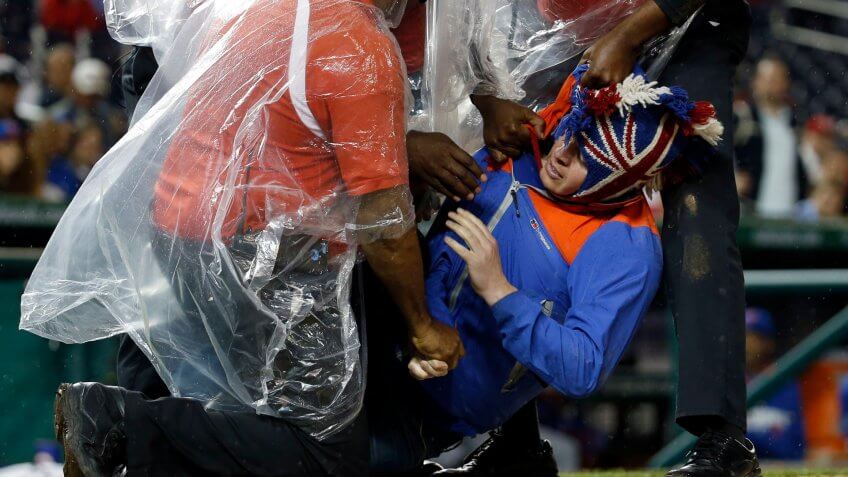 You Can Get Fined For Running Onto the Field

Hopefully common sense will prevent you from running onto the field during a game. There always, however, will be people who do something regrettable. Far from being treated as a juvenile prank, the consequences can be severe. A New York Mets fan got 20 days of community service and a $3,000 fine — and shelled out more than $10,000 in legal fees — for storming the field. Some fans have received lifetime bans from the ballpark, a father-son duo spent time in jail, and a 17-year-old Philadelphia Phillies fan was tased when he ran onto the field. 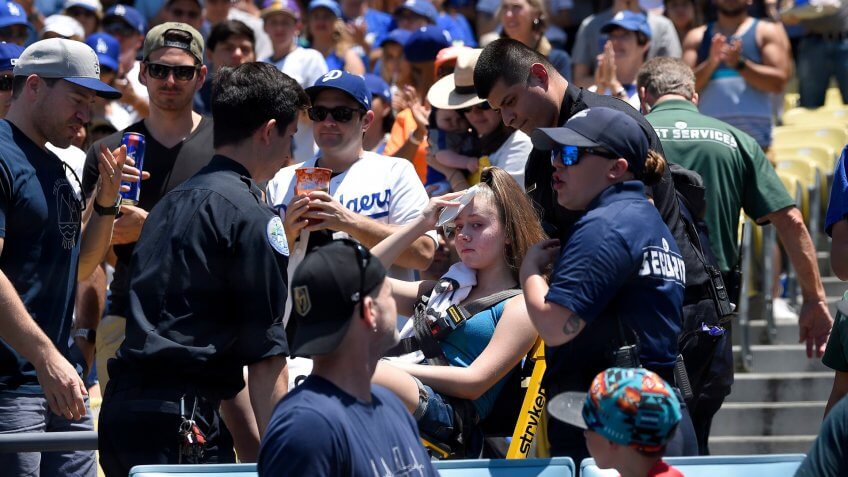 Being Hit With a Foul Ball Could Cost You Thousands

A few lucky fans head home from every baseball game with free souvenirs in the form of foul balls hit into the crowd, but foul balls can carry a steep cost. Roughly 1,750 fans are hurt by foul balls every year. That’s about two injuries every three games. Entering the stands at between 100 and 110 miles per hour, foul balls give fans seated 60 feet from home plate about four-tenths of a second to get out of the way. In 2011, a fan at a Yankees game was seriously injured and racked up $100,000 in medical bills. He had to pay $25,000 out of pocket. 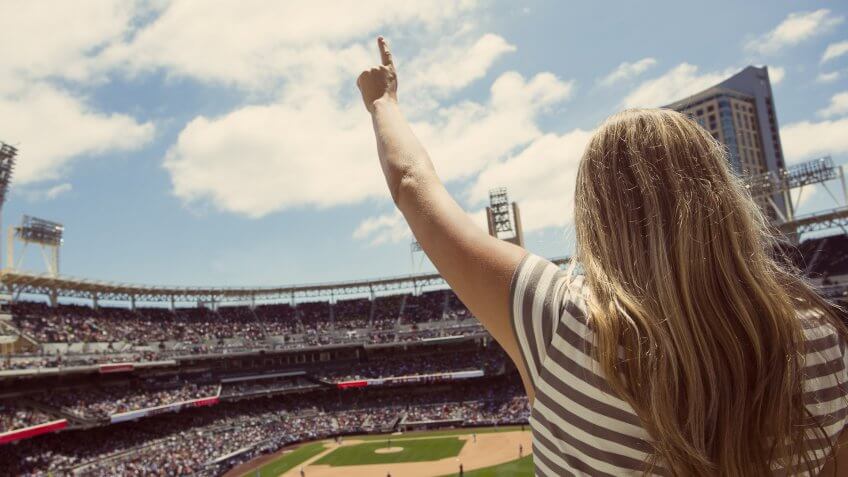 The Wrong Kind of Outburst Might Cost You $10,000 One Day

Boos, cheers and jeers long have been part of baseball, but there are some fans who don’t know where to draw the line. If you’re a fan without a filter, it could cost you. One fan at Fenway Park in Boston was ejected after he went on a racial tirade aimed at an African-American player for the Baltimore Orioles, and another was banned for life after hurling racial insults at, oddly enough, the national anthem singer. In the wake of the first incident, the player called for Major League Baseball to fine fans at least $10,000 for such outbursts. 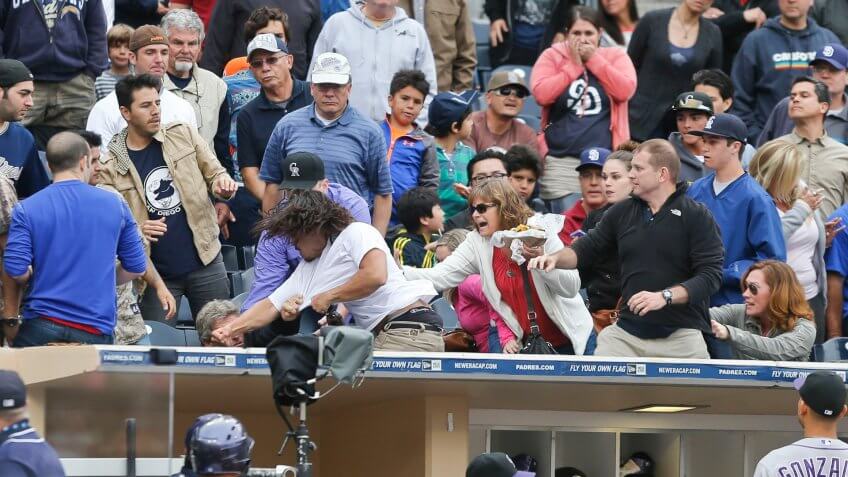 Fighting at a Game Can Cost You Thousands

Even worse than verbal assault is physical assault, and if you’re one of those fans who resorts to physical violence on stadium grounds, you’ll likely be arrested on the spot and charged. Depending on the nature and seriousness of the incident, as well as the state where the offense occurs, an assault and battery charge can cost anywhere between $500 and $10,000 in fines and even incur prison time. By now, you should know not to assault someone, so this fine should be easily avoidable. 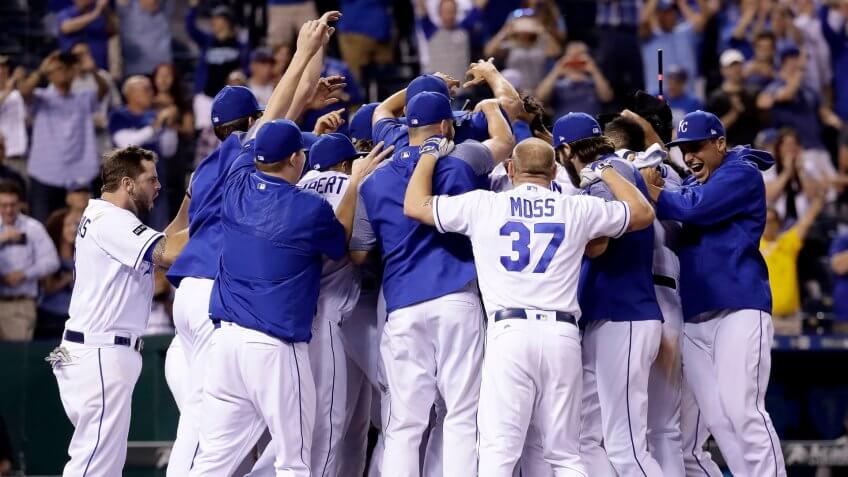 A recent analysis from The CostGuys determined how much you’d have to pay to actually see your team win. The calculation combined the average cost for a family of four to see a game with each team’s recent winning percentage. You’d have to sit through 3.05 Kansas City Royals games, for example, at a cost of $373.66 to see a victory. If you’re a Boston Red Sox fan, it’s only two games, but since Fenway Park is among the most expensive stadiums in the country, you’d pay $404.87 to witness a win.

Need Help Saving Up? How To Create a Budget You Can Live With 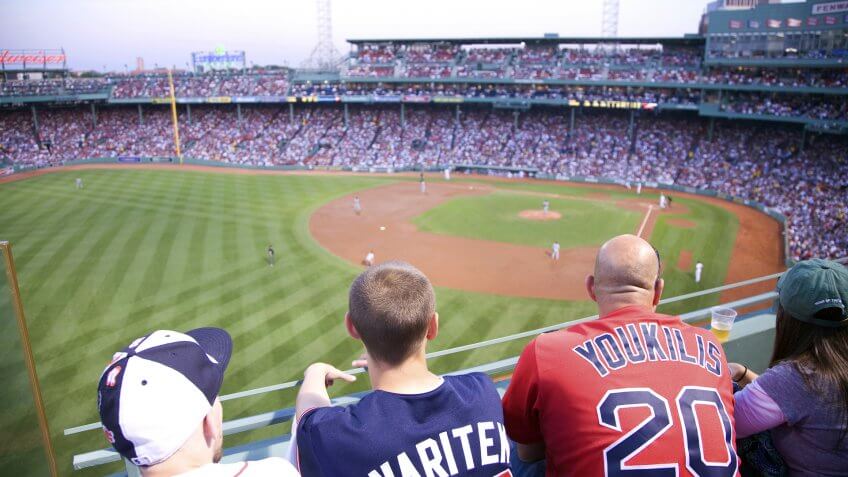 The Good News: There Are Ways To Save

A day at the ballpark is far from free, but taking in a game doesn’t have to bankrupt you, either. Following a few tips and tricks can help you to cut back on costs before you head to the stadium. 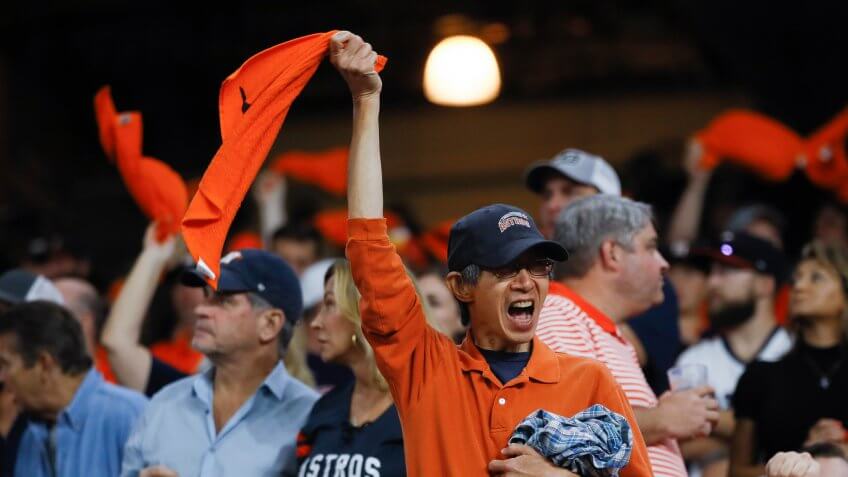 The first money-saving tip is easy. Avoid big fines, medical bills and legal trouble by exercising good judgment and using common sense. Don’t run onto the field, don’t fight and don’t do things such as smoke where you’re not supposed to. Put your phone down and keep an eye on every swing of the bat to remain alert for foul balls. 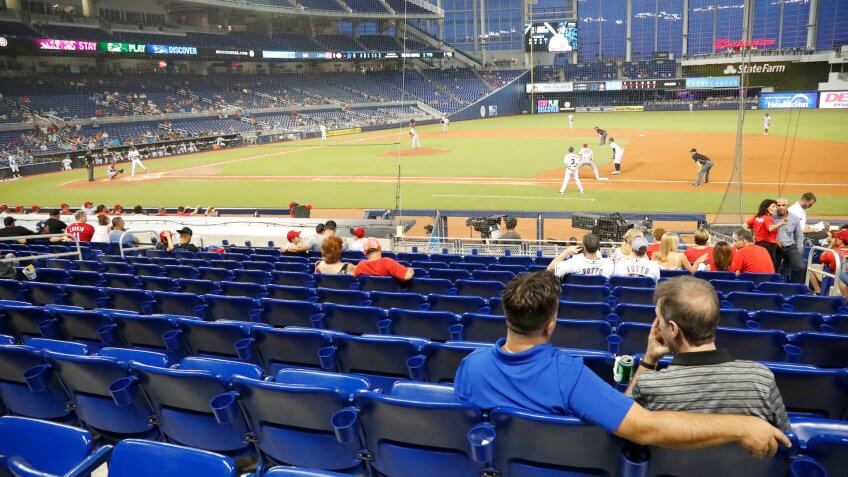 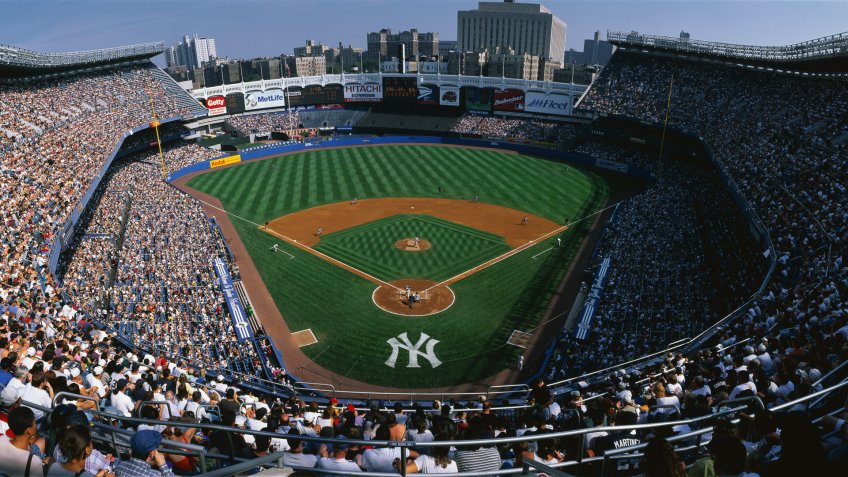 The visiting team also has a big impact on the price of a game. When your team is hosting a small-market team that’s not doing particularly well, chances are good that tickets will be cheaper. On the other hand, the most expensive teams to see in a visitor’s stadium are the Yankees, Red Sox and Dodgers. 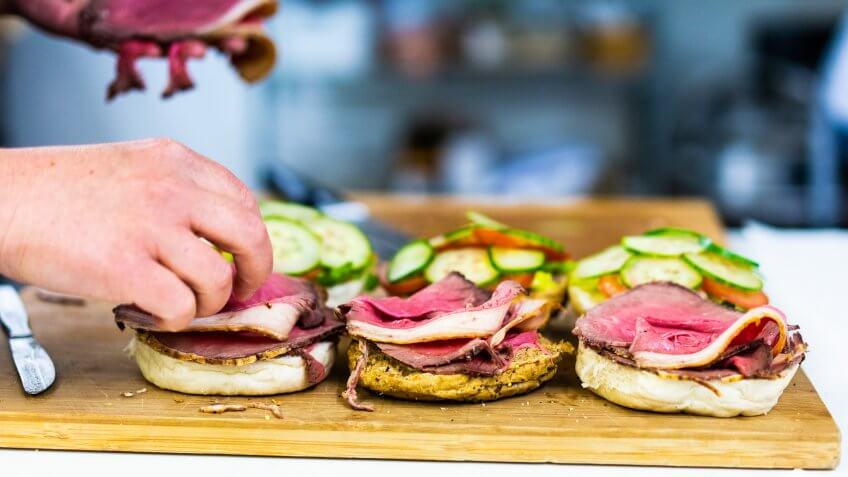 Pack Your Own Food

Many stadiums allow you to take your own food into the ballpark, provided that it’s the right stuff, the right size and in the right packaging, but check your stadium’s policy to be sure before heading to the game. In most cases, it has to be packaged in single-serving bags inside of a soft cooler. That means you can usually pack snacks such as chips, popcorn, fruit and even things such as sandwiches or wraps. 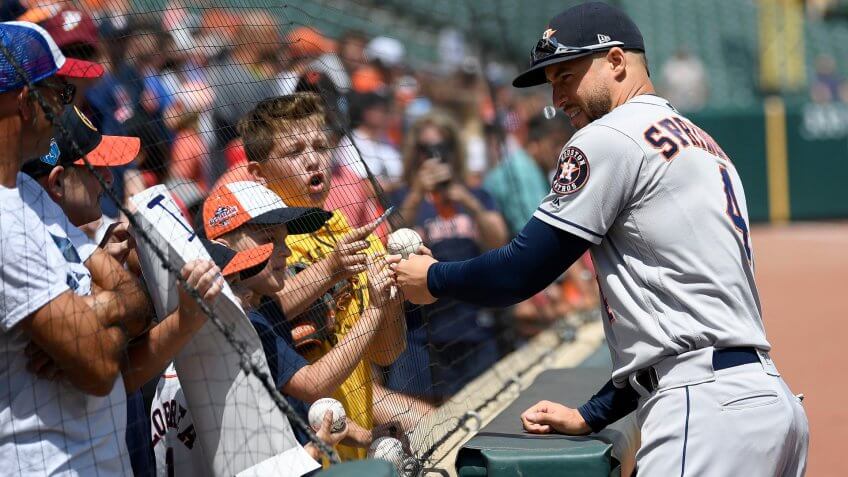 Go To Late-Season Games (if Your Team Is Losing) 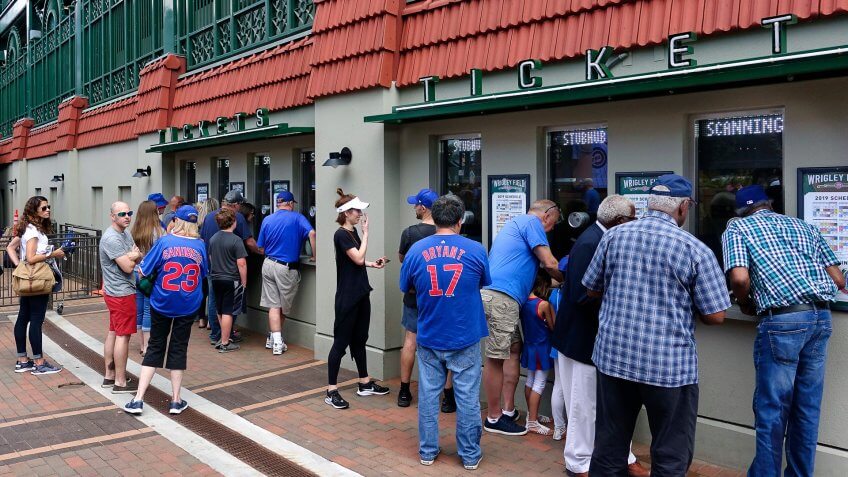 Wait Until Game Day To Buy Your Tickets

When it comes to buying tickets, it often pays to wait. According to USA Today, there are real savings to be had by waiting until game day or close to it to buy your tickets. In fact, the average ticket sold the week of the game is $38 compared to $68 for the same ticket purchased more than one month before the game. 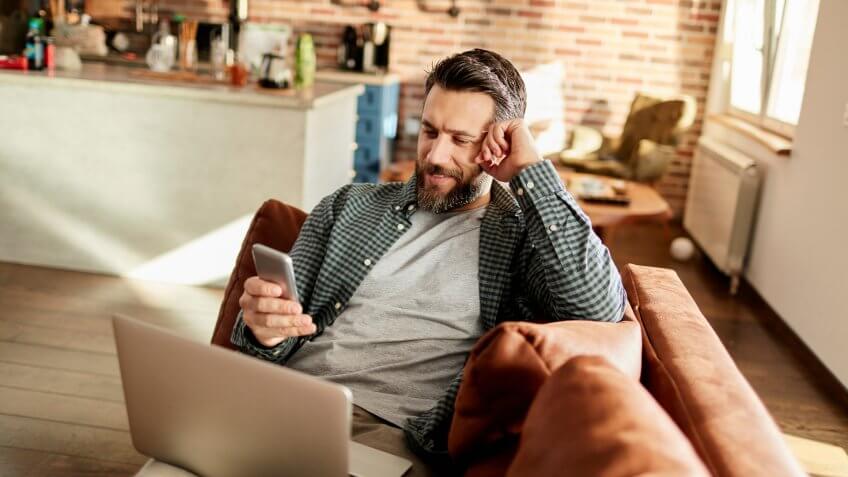 Before you buy tickets, check the “Fan Value Offers” page of the MLB.com website. If your team participates, that’s where you’ll find things such as special-event ticket packages and discount offers. The Royals, for example, offer $8 View Level seats. 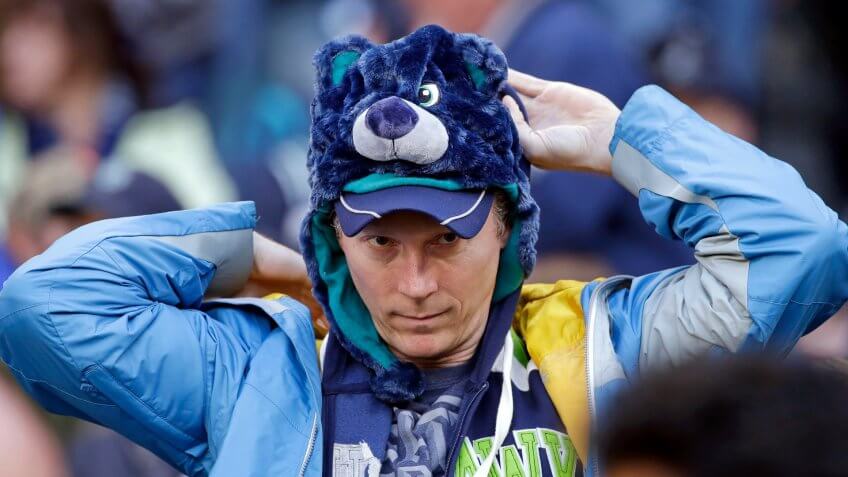 You also can look for promotions that add value to the experience, even if the ticket price doesn’t drop. In 2019, for example, the Arizona Diamondbacks gave away Mother’s Day charm necklaces and hosted a classic car show for ticket holders. The Cubs passed out grill mitts and “Star Wars” blankets. The Dodgers gave away hoodies and Jackie Robinson jerseys. Remember that quantities usually are limited, so get there early to claim your freebie. 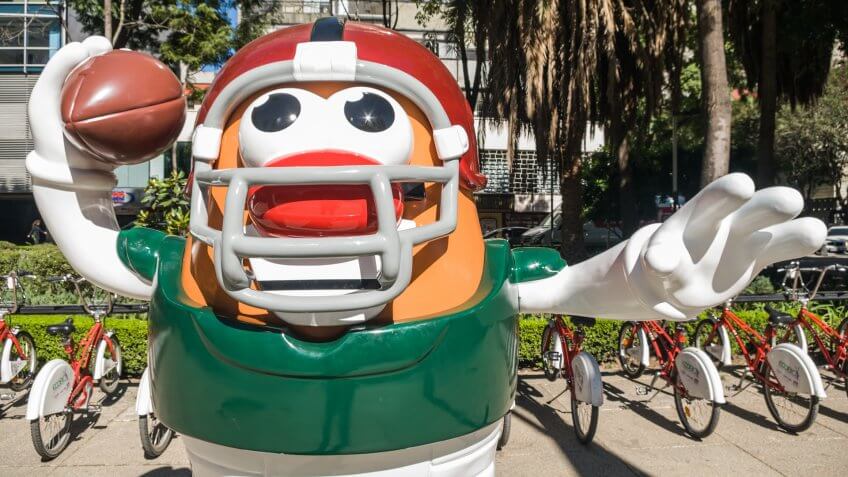 NFL tickets used to be a lot cheaper than they are now.