The Etiquette of Requesting, Giving and Receiving Money as Gifts 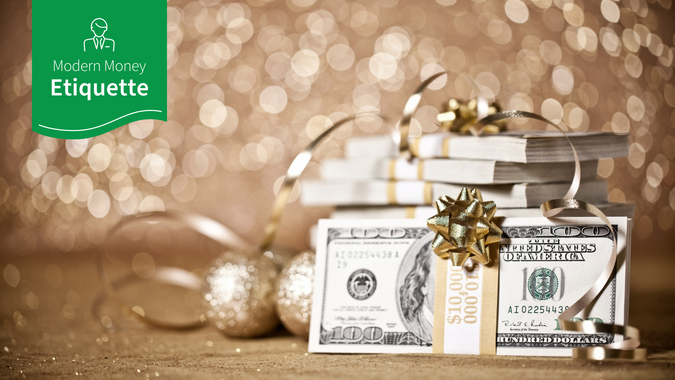 “It’s the thought that counts” is a phrase we often attach to gifts received — especially if the gift wasn’t exactly a hit. The idea is that, “No, this present wasn’t what I wanted, but hey, nice of you to put in the effort and/or spend the money on me!”

Be Aware: Rude Money Habits You Need To Break Now
Find Out: Who To Tip When You’re Traveling

Wouldn’t it be better if we could just pick the gifts ourselves, or — better yet — just get an envelope stuffed with cash so that we could purchase our own gift? It makes so much sense, and yet it beckons the question: Is that tacky?

The answer is no — at least, not necessarily.

“Two-thirds of people prefer to receive cash as a gift at any given time,” said Maryanne Parker, etiquette expert and founder of Manor of Manners. “Cash, especially an appropriate amount, can go a long way because the recipient will be able to cover certain bills, or purchase an item that was on her list, save for a dream holiday for the next year, and so many other alternatives.”

Read More: Holiday Money Etiquette: Everything You Need To Know for the Season

Parker adds that cash as a gift has become less taboo in recent years in part because society has become more transparent about discussing money in general.

“We were raised to feel uncomfortable talking about money, [but] in the times of social media influencers, elite entrepreneurs and digital gurus, money is becoming more and more of an acceptable conversation.”

So how can you request, give and/or get money as a gift this holiday in a respectable fashion?

For All Those Get-Togethers: How To Handle Holiday Invites and Events While on a Budget

Let Those Closest to You Know You Will Gladly Accept Money

“We are usually aware who might present us with a gift for the holidays, and if we are close enough we can ask them [for money as a gift] without hesitation,” Parker said. “But if this is not the case, we can always let them know that we are aware of the thoughtfulness and we will be very grateful, however we do not want to burden anyone due to the uncertain times we are living in. The stores will probably be packed, the lines will be long, what we want at the time might not be available due to the supply shortages, and so many other things. We will gladly accept cash.”

Tips: How To Do a Holiday Gift Exchange on a Budget

If Someone Asks You What You Want, Be Politely Straightforward

“If our aunt says ‘What should I get you for Christmas this year?’ We might say, ‘Please do not worry about me, I will be happy just to see you for the holidays’. And she responds, ‘You know that I will get you something anyway!’, we can definitely say politely, ‘Cash will be fine.'”

Dont’ Do It: Rude Money Questions You Shouldn’t Ask at the Holidays

Consider Asking For a Gift Card Instead

If asking for cash is still too weird, don’t feel pressured into it.

“It can be difficult to ask for money, especially when it comes to the gift-giving season, but the truth is that for most of us it makes more sense to receive something like an Amazon gift card rather than a physical gift with the risk that we won’t have a use for it,” said Julie Ramhold, consumer analyst with DealNews.com. “If you aren’t comfortable with asking for outright money, when family and friends ask what you want for the holidays, consider asking for gift cards instead.”

Consider Gifting a Gift Card Instead of Cash

The same works in reverse, too.

“If you feel uncomfortable handing over cash, then you can’t go wrong with a gift card, especially one that can be used anywhere like a Visa gift card,” Ramhold said. “There are plenty of festive themed cards this time of year, so it’s easy to find one that fits the mood of the season. And if you have no idea what to buy someone, opting for something like an Amazon or Starbucks gift card will go over way better in general than a random gift that you think your recipient might like.”

If You Do Ask For Cash, Have a Plan for It

“If you do want to ask for cash, be sure to have a plan for it,” Ramhold said. “That way when someone asks what you want for the holidays, you can say something like, ‘Money would be most helpful, as I’m planning a trip for next year’ — or something similar. Even if there’s a specific purchase you want, you can tell them you plan to use the cash for that — just beware that doing so may prompt them to want to get it for you rather than just giving you the cash to buy it yourself.”

Thinking of Giving Cash? Pay Attention to the Recipient’s Language

“If they say things like they have everything they need or they can’t think of anything they want, there’s a good chance they’re subtly asking for money,” Ramhold said. “As the giver, it’s up to you to decide if you want to give cash or a gift card in this case, but either way, you probably can’t go wrong.”

If you end up gifting cash, be sure to pair it with a nice card. The thought still counts!

No Matter What You Get, Show Gratitude

“If you receive cash for a gift, it may throw you as it’s not a common gift these days, at least for the holidays,” Ramhold said. “But be sure to show gratitude for whatever you receive, even if you think the person didn’t put much effort into it. Consider writing a thank you note, but at the very least be sincere in your thanks whatever you do.”