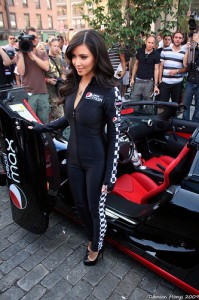 Celebrities are often placed precariously in the media spotlight for actions that the public might find shocking–and Kim Kardashian is no exception. The reality TV star recently made headlines after accusations surfaced that she was paying significantly fewer taxes in California than what was expected for her income.

If the allegations are true, would she be the only A-lister to get away with paying 5-figure-income tax rates on an 8-figure annual income? Or is this luxury common for just about any wealthy taxpayer who has discovered tax loopholes?

In January, Kardashian became the target of Courage Campaign, which accused her of paying significantly less in tax money than her tax bracket should require.

The advocacy organization posted an online video asking Californians to support a proposed ballot initiative to raise taxes on wealthy residents. It explained that Kardashian had earned $12 million in 2010, but paid just a percentage point more in state income taxes compared with a person earning $47,000 annually. In other words, according to Courage Campaign, Kardashian had paid 10.3 percent vs. the 5-figure earners’ 9.3 percent.

On a federal scale, the rich, famous and those in the public eye typically don’t defraud themselves from something as major as tax evasion, as evidenced by the high number of celebrities who forget to pay taxes, subsequently finding themselves either in jail, or penalized with big fines.

But as with many other high earning folks, it’s possible that the Hollywood elite could end up owing less in taxes, thanks to accountants and financial advisers who find tax loopholes.

Warren Buffett is well known–and well criticized by some–for backing President Barack Obama’s agenda to raise taxes on the wealthy. He believes millionaires and billionaires give back far too little of their income to Uncle Sam. In fact, Buffett’s secretary earned a spot at the last month’s State of the Union address for paying higher than his 17.4 percent rate in 2010.

But Buffett isn’t the only billionaire paying low taxes. A 2011 Bloomberg report found that the top 400 earners in the United States paid an average tax rate of 18 percent, with some whittling their bill down to as low as 1 percent.

How is it that high-income earners are able to forgo paying escalated tax rates than their middle-income neighbors?

It’s a known fact that while high earners often pay greater dollar amounts in taxes, they are also able to let themselves off the hook from paying a lower overall tax percentage compared to other taxpayers. The answer is simple: The wealthy take advantage of several loopholes.

While capital gains tax rates can be major liabilities for individuals who pay both CGT and a standard income taxes, individuals like Buffet, who live almost completely on investment incomes, aren’t viewed as having a taxable income–meaning, they’re able to take advantage of a low, 15-percent income tax rate versus the 40 percent or more paid by others.

High earners with a taxable income sometimes find another loophole known as deferred compensation, which occurs when an unlimited amount of their incomes can be deferred for the following year’s tax cycle. In this case, these people don’t appear to have earned income in that particular year, thereby lowering their tax liabilities.

Millionaires and billionaires are often known for their philanthropic efforts. While many are driven solely by kind hearts and a spirit of giving, there is a huge tax payoff for those willing to donate their finances. Many donors give appreciated stock, property or cash to avoid paying capital gains, since this action services as a loss against investment gains.

Some wealthy taxpayers transfer income earned in the U.S. to offshore accounts, effectively exempting them from being taxed by their state or federal governments. Using offshore accounts for other purposes, like tax evasion, is against the law. The IRS responded recently to this by creating the Offshore Voluntary Disclosure Initiative (OVDI), which reduces penalties for evaders.

Wealthy individuals have long been able to benefit from various tax loopholes that lower their liability — and it may seem like celebrities get all the special tax breaks due to their popularity in the public eye. But with a savvy financial consultant in their corner, just about any wealthy individual can navigate the fiscal landscape and pay a lower tax rate each year.