Mark Cuban Claims 80% of His Non-Shark Tank Investments Are in Crypto — Where Else Is He Invested? 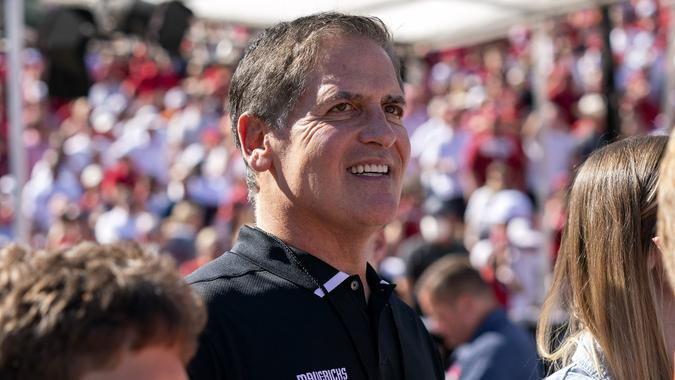 Billionaire Mark Cuban recently appeared on “The Problem With Jon Stewart” podcast, talking with the former late night talk show host about investments, healthcare, and, of course, crypto. Cuban was outspoken about his diversified portfolio, which includes venture capital in companies he discovered on the reality TV show “Shark Tank,” where he is an investor, and crypto.

Learn: Advice From Mark Cuban, Warren Buffett and Other Experts That Can Help You Survive a Crisis
Compare: 6 ‘Shark Tank’ Products We Can’t Live Without

He told Stewart, “80% of the investments that I make that are not on “Shark Tank” are in or around cryptocurrencies. So where is the billionaire entrepreneur putting his money?

Cuban noted that he’s looking to invest in more Decentralized Autonomous Organizations (DAOs). These collectives have no owners, but stakeholders can vote on governance by holding shares of tokens that give them a say in the organization.

Cuban is particularly eyeing the banking and insurance industries, nothing that they are “going to change” with the growth of DAOs. He also said he expects new, “game-changing businesses” to come from DAOs.

Digital coins describe everything from Bitcoin to popular altcoins like Dogecoin and lesser-known cryptocurrencies. TechJury reported that the global market size for digital currency will grow to $1,087 million by 2026, representing a compound annual growth rate of 3.5%.

More: 8 Best Cryptocurrencies To Invest In for 2022

Last year, Yahoo Finance reported that Cuban was buying Bitcoin, Ethereum, and several altcoins. He also invested in the crypto exchange Coinbase during its IPO. Calling Bitcoin a “hedge against fiat and printing too many fiat dollars,” Cuban said, “It is a store of value that is going to increase in value because it’s scarce.”

Non-fungible tokens are digital representations of artwork, items, music and more that have value on the blockchain and in the metaverse. Last year, Cuban invested in NFT platforms including SuperRare, Mintable, Cryptoslam and OpenSea, Yahoo Finance reported.

Cuban, owner of the Dallas Mavericks, also began issuing NFTs to attendees at Mavericks games last year. The organization mints 20,000 NFTs of players each game and gives them to fans who attend the game in person.

Cuban said the idea is to reward fans for coming to the games. Fans can also sell and trade NFTs on an exclusive platform, although the Dallas Mavericks issued a statement saying the organization is not recommending Mavs NFTs as investments. As fans accrue NFTs from attending games, they may be able to earn additional rewards. However, NFTs on the platform are going for $200 to $10,000, according to Ledger Insights.

Behind cryptocurrency, DAOs and NFTs lies blockchain technology. Cuban told Stewart that he has also invested in blockchain companies. Cuban said on the podcast that he is also a fan of smart contracts, which are used to form DAOs, and power decentralized finance applications and NFT exchanges.

See: 10 Cheap Cryptocurrencies To Buy
Find: $16 Million Reportedly Stolen From Crypto.com — Is Your Investment in Jeopardy?

Even with his immense knowledge of the market and investment savvy, Cuban admits that, for many people, cryptocurrency is “hard to understand and it’s a hassle.” Investing in the space is a “casino-like” risk, he told Stewart, in part because it’s so new. “It’s like the early days of the internet,” he said on the show. “It’s 1995 for cryptocurrencies.”