Spot Bitcoin ETFs on the Horizon? Grayscale Asks Investors to Speak Out in Support Ahead of SEC Ruling 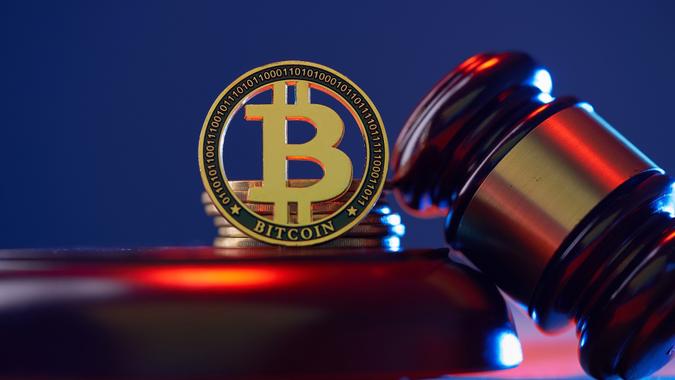 Grayscale Investments has launched a campaign encouraging investors to submit comments on its application with the Securities and Exchange Commission (SEC) to convert its Grayscale Bitcoin Trust (GBTC) to a spot Bitcoin exchange traded fund (ETF).

See: These Countries May Be Next To Accept Bitcoin as Legal Tender
Find: Crypto Leaders Tackle Super Bowl Ad Campaigns: A Bitcoin Giveaway and More

The comments the agency is receiving come from a variety of Americans, ranging from students to civil engineers, and from IT employees to quant analysts. Paul Grewal, Coinbase chief legal officer, has also weighed in per the SEC.

Craig Salm — chief legal officer, Grayscale Investments — told GOBankingRates that there are a few common themes which have emerged from the comments: People believe that GBTC’s conversion into an ETF is in the public’s best interest; commenters recognize that becoming an ETF will allow the product to better track NAV; and, more broadly, such conversions will allow the United States to remain competitive in the global market.

“We continue to be humbled and encouraged by the widespread support for GBTC’s conversion into a spot Bitcoin ETF,” Salm said. “It is clear from these letters that investors, Bitcoin proponents, and U.S. citizens want and are ready for GBTC to become a spot Bitcoin ETF, and at Grayscale we will continue to advocate on behalf of these groups.”

Americans of all Sorts Send Comments to the SEC

Joshua Kimbrell, identifying as a professional civil engineer, said in his comments that he is “extremely frustrated with the SEC for not approving this sooner.”

“The SEC is financially HARMING investors like myself by not approving the spot ETF. Let Americans who want to buy Bitcoin through an ETF do it. We understand crypto market risks and volatility, that’s the reason we want to buy it. We want to be able to hold Bitcoin via spot ETF through Vanguard or other institutions. The SEC is an embarrassment by approving a futures ETF and denying a spot ETF when the spot market is the underlying driver of the futures market.”

A commenter named Nicole Jackson wrote: “The BTC spot ETF needs to be approved ASAP. It’s an absolute embarrassment that countries around us have a spot approved and we don’t. You’re putting us behind competitively and it seems very clear your priorities are hedge funds and VCs and not retail investors.”

Brock Pierce, Bitcoin Foundation chairman, told GOBankingRates that he is not surprised to see such a wide audience of people interested in having the GBTC convert to an ETF.

“The GBTC was a stopgap product because it was so difficult to get an ETF approved early on, but it is an imperfect solution. The end goal is, and should always have been, to have a spot Bitcoin ETF that allows for widespread access to Bitcoin exposure through traditional equity markets,” Pierce said.

While 2021 saw the first launches of several Bitcoin-linked ETFs, a spot Bitcoin ETF is what many investors and analysts are hoping for. However, there has been continued stalling from regulators.

Investors and investment managers have anxiously been awaiting a decision from the SEC on the approval of Bitcoin ETFs, which would have to be traded on the “exchange” — in other words, on the stock market (and therefore, only during the hours the stock market is open). Right now, cryptos don’t have any such limitations and can be traded at any time. While several companies have filed crypto ETFs with the SEC, the commission has either rejected or delayed its decisions on many such filings.

Discover: Ethereum vs. Bitcoin: Which Crypto Is Better?

Last October, Grayscale Investments announced it had filed with the SEC to convert its Bitcoin trust into a Bitcoin spot ETF, saying it was the “natural next step in the product’s evolution.”

Justin Newton, CEO of Netki, told GOBankingRates that Grayscale has been at the forefront of advocating for the SEC to approve a spot Bitcoin ETF, and they should be lauded for this campaign.

“Everyone in the industry understands that a spot ETF — as opposed to the futures ETF for Bitcoin that was recently approved — would offer superior value to investors. There would be lower fees and more exposure to the underlying Bitcoin itself. Futures ETFs are based on paper contracts, after all, and the fees tend to be higher,” Newton said.

He added that what’s interesting about this campaign is that it appears to have a lot of organic support.

“All sorts of people from apparently many walks of life have written to the SEC to advocate for the approval of a spot Bitcoin ETF, and this is a testament to the widespread demand for the availability of such a financial instrument in the United States,” he said, adding that spot Bitcoin ETFs have been approved in a lot of other countries. “And it’s obvious — because of all these letters now being written to the SEC on the issue — that investors are growing impatient with regulators. They’re saying that it’s no longer logical to wait for such approval — that it should happen now — especially given that the SEC’s stated mission is to protect investors. Well, a spot Bitcoin ETF would go a long way towards protecting investors. It’s time.”

Zachary Friedman, co-founder and COO of Secure Digital Markets, told GOBankingRates that it’s abundantly clear now that many, many Americans want a spot Bitcoin ETF, as they understand the benefits — the lower fees, and better exposure to the underlying Bitcoin. In addition, many of these investors would find using a spot ETF easier than having to go to a crypto exchange for buying.

Learn: Can Gold and Bitcoin Coexist in a High-Inflation Environment? Why You Should Hold Both Investments
Explore: Bitcoin and Crypto Taxes in 2022: What You Need To Know

“This serves as a useful onramp into the space without need for complicated wallets and exchange use,” he said. “I think it’s becoming clearer to the SEC and regulators in the United States that having a futures ETF for Bitcoin alone is not going to cut it. People want the clarity and security of products like a spot ETF offers. This is a good thing. People and companies are making their voices heard, and the SEC is going to take their commentary seriously.”