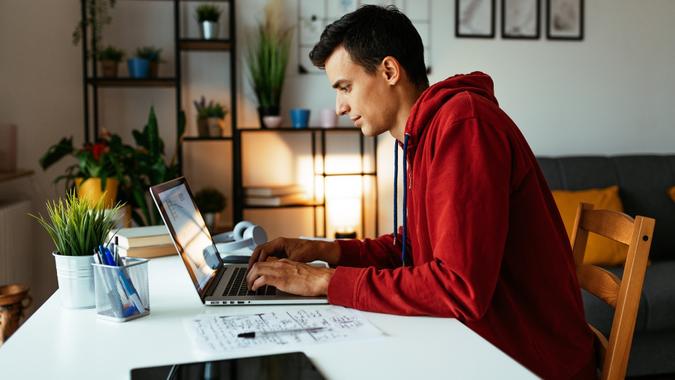 The brainchild of blockchain royalty, Stellar was co-founded in 2014 by Jed McCaleb of Mt. Gox and Ripple fame. In the ensuing years, the project has emerged as a shining example of how blockchain technology can have functional, real-world utility beyond just digital currency.

But is Stellar’s native digital currency — XLM — a worthwhile investment, and what is the XLM price prediction that most analysts are making for the near and long-term future?

Here’s what you need to know before putting your money into play.

Stellar is a decentralized, open-source payment platform that uses blockchain technology to enable its users to transfer funds quickly, securely and inexpensively. It doesn’t favor any one currency. Instead, the platform lets account holders create, send and trade digital representations of all forms of money, like dollars, yen and bitcoin.

The result is a first-of-its-kind network that unites all of the world’s financial systems under one digital roof.

No one owns the platform. Its open-source software is maintained by its users, who have more than 7 million accounts. The Stellar network has processed more than 89 million payments and more than 5 billion total operations — that’s 7.1 million operations every day.

Unlike so many competing platforms, the aim of Stellar is not to replace any form of currency, but to provide a platform where all currencies can work together.

What Is Stellar XLM?

The Stellar network utilizes its own native digital currency called the stellar lumen. The cryptocurrency trades under the symbol XLM.

Stellar requires its account holders to hold a small quantity of lumens at all times, although the lumen requirement is modest and transaction costs are just a fraction of a penny. Stellar’s literature says that both the Lumen requirement and the transaction fees are necessary to ward off bad actors and fraudsters and to eliminate database clutter and spam.

What Is the Current XLM Price Prediction?

XLM broke through the one-cent barrier in 2017 after trading on the open market for nearly three years at a fraction of a penny.

As of Aug. 24, XLM trades at around $0.11, but there were a whole lot of ups and downs in between — and before you put any stock into an XLM price prediction, it’s important to know the history of stellar lumens’ price movement from its inception through the current day.

In January 2018, XLM was trading at $0.69 — just shy of the all-time high it would reach three and a quarter years later.

However, it spent much of the time in between those two peaks trading way down in the single-digit cents, bottoming out under a nickel. As is the case with so many of its crypto cousins, an investment in stellar lumens is an investment in volatility.

How Much Will XLM Be In 5 Years?

GovCapital offers a much rosier outlook. It sees XLM going all the way up to around $1.95 by August 2027 — but that’s just the prediction in the middle. Its highball forecast is closer to $2.25.

DigitalCoinPrice predicts that XLM will climb to a maximum of $0.60 nine years from now in 2031, although the publication thinks $0.57 is more likely. The optimistic GovCapital five-year prediction is an outlier — most analysts don’t see XLM breaking the $1 barrier this decade.

While it’s certainly possible that stellar lumens could be trading for $10 or more in the near future, credible experts who are willing to go on the record with such a prediction are hard to come by.

Unlike so many cryptocurrencies whose potential for appreciation is based purely on the speculative value of the coin itself, lumens are the native currency for a platform with the promise of growing in value through real-world functionality. Stellar stands out from the many other networks that deliver cheap, fast transactions because it works with any kind of currency.

Since it’s an open-source network, anyone can build on it, including companies that want to create their own cryptocurrencies or digital wallets. Individuals can use it to convert currency to coins or coins to currency, as well as for advanced applications like smart contracts and NFT mining — and none of that is possible without stellar lumens.

You’d Be Following Companies That Already Bet Big on Stellar

Stellar — and therefore its native lumen coin — has earned a great deal of credibility through its impressive list of corporate partnerships. If you do choose to invest in XLM, you’d be following big industry names who have also put their faith in the platform, including:

Where Can You Buy Stellar Lumens?

You can buy stellar lumens just as you would any other cryptocurrency on your favorite exchange — most of the major exchanges list XLM among their offerings. Here are just a few of the most popular crypto exchanges where you can buy XLM:

You can also buy lumens directly from Stellar on the StellarX platform.

StellarX is Stellar’s native cryptocurrency exchange. It claims to be the world’s first decentralized exchange that offers gateways to both digital currencies and global fiat currencies. Users can buy lumens and other cryptocurrencies with Visa, Mastercard or Apple Pay. It’s available in more than 100 countries, and if you’re only buying small amounts, no KYC verification is required.

Users can put their funds to work through the Stellar Automated Market Makers (AMM) program, which lets them earn money for depositing assets into the StellarX liquidity pool. Users can also trade directly with other traders without a middleman brokering the transaction, and they can deposit and withdraw funds — both crypto and fiat — and convert tokens to money all from their wallets through the StellarX app.

In 2021, Cyberint reported on a phishing scam that targeted holders of stellar lumens. The fraudsters sent XLM owners a very convincing email that appeared to come directly from Stellar. The message explained that Stellar was conducting a promotional giveaway, airdropping lumens into the accounts of Stellar users as a reward and a promotion.

Users who clicked the link were redirected to an imposter site that mimicked the Stellar domain through the use of what’s called an internationalized domain name (IDN) homograph attack. Once users found their way to the clone IDN site, the scammers encouraged users to reveal their personal data in exchange for the lumens, which, of course, never existed.

Stellar has published and continuously updates a page dedicated to helping its users avoid crypto scams like this one.

No investment is guaranteed, particularly not in the world of cryptocurrency. But many analysts believe that the uniquely useful potential of the Stellar platform makes its native cryptocurrency a digital coin that stands out from the rest.

Conduct your own research, speak with a qualified professional and register for a Stellar account and get to know the platform and its native XLM cryptocurrency before you make up your mind.