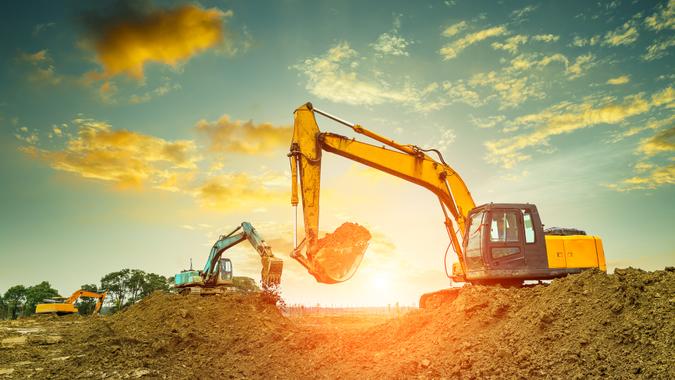 The strength for those infrastructure stocks was reflected in the Global X US Infrastructure Investment ETF, which trades under the ticker PAVE, as it gained 1.5% and hit an all-time high in the opening minutes of the session, CNBC reported. The fund’s top holdings include stocks like Nucor and Vulcan Materials, which moved higher on Monday morning.

Jay Hatfield, CEO and portfolio manager at Infrastructure Capital Advisors, told GOBankingRates that the surprise passage of the infrastructure bill late on Friday caused a spike in infrastructure related stocks on Monday.

“We expect these stocks to give up some of these gains as the infrastructure bill funds will be spent slowly over the next decade, so the real impact on earnings and cash flow will initially be modest,” Hatfield added.

While the $1 trillion bipartisan infrastructure bill is a big win for Americans, it will also benefit the businesses that rely on those infrastructure every day, providing a boost for many of the companies producing the equipment to build the infrastructure, such as Caterpillar and United Rental, as well as the materials producers like steelmaker Nucor, Jason Hall, a contributing Motley Fool analyst, told GOBankingRates.

“However, investors should understand that even $1 trillion spent on so many different initiatives and across a five-plus year window, isn’t likely to make any single company a huge investment winner,” Hall added.

More: Tesla Stock Down in Pre-Market After Elon Musk’s Twitter Followers Said He Should Sell 10% of His Shares

He said that all of the top-10 holdings in the U.S. Infrastructure Development ETF (PAVE) are within 10% of their five-year highs at recent prices.

“In other words, the market has largely already priced in the benefits of this infrastructure deal. Instead of looking for a quick return on government spending, investors would do better to focus on companies with strong, durable competitive advantages across market conditions, and regardless of large catalysts like the infrastructure bill,” Hall continued.

Elizabeth Vermillion, equity analyst at CFRA Research, echoed the sentiment, telling GOBankingRates that CFRA thinks the fact that a U.S. federal infrastructure spending plan will be signed into law is already priced into the market. However, she added that CFRA sees two opportunities for price appreciation.

Top 10 Most Expensive Stocks: What Is the Highest Priced Stock Right Now?
Learn: GE Stock Rises as Plans Reveal Separation Into 3 Separate Companies — What To Expect by 2024

“The first is when the bill is finally signed into law (which we are very confident in, especially since the House finally passed the plan), and the second is when project work actually begins over the next few years. There are plenty of growth catalysts for industrials in coming years,” she said.