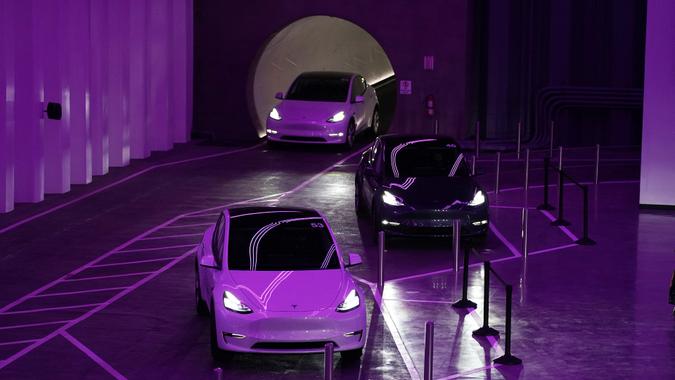 Elon Musk doesn’t just have his sights set on the skies above us. In fact, his Boring Company just got the greenlight to go ahead with plans for expanding the “Vegas Loop,” a tunnel that goes under the Las Vegas strip.

LATEST POLL: How Do You Plan To Travel Over the Thanksgiving Holiday?
Explore: What Companies Has Elon Musk Invested In?

“Expanding and moving forward with plans for the “Vegas Loop.” #ClarkCounty Commissioners just approved an agreement with the @boringcompany to establish and maintain a transportation system that will go under the Las Vegas Strip. It will also go to @AllegiantStadm and @UNLV,” Clark County Nevada’s official account tweeted yesterday.

Expanding and moving forward with plans for the “Vegas Loop.” #ClarkCounty Commissioners just approved an agreement with the @boringcompany to establish and maintain a transportation system that will go under the Las Vegas Strip. It will also go to @AllegiantStadm and @UNLV. pic.twitter.com/2ju3xcFq7O

Loop is an all-electric, zero-emissions, high-speed underground public transportation system in which passengers are transported to their destination with no intermediate stops, according to The Boring Company, which also refers to its underground roadway as  “Teslas in Tunnels,” according to its website.

“Vegas Loop is expanding – 29 miles and 51 stations! Thanks to the Clark County team for the great partnership and to the Commissioners for unanimous approval,” the Boring Company stated in response to Clark Country’s initial tweet.

To “solve the problem of soul-destroying traffic, roads must go 3D,” The Boring Company on its website. “Surface roads today incorporate 3D model-like elevated highways and cloverleaf interchanges that are expensive and disruptive to build. Tunneling networks are 3D and provide high-throughput transportation in an economically viable way. Traffic and congestion will be a thing of the past.”

Interesting: Nearly 40% of America’s Wealthiest Billionaires Give Relatively Nothing to Charity

Other benefits include beautifying cities by minimizing usage of surface area and repurposing roads into community-enhancing spaces. They also have unlimited capacity, as there is no practical limit to how many layers of tunnels can be built. In addition, the tunnels are weatherproof, as rain, snow, wind and surface temperatures do not affect system operation.

Clark County said that the plan approved includes 29 miles of tunnels and 51 stations, with a capacity of 57,000 passengers per hour. In addition, no taxpayer money will be used, according to a tweet. The approval is for a 50-year franchise agreement. The Boring Company President Steve Davis clarified that the system would be built in phases, The Las Vegas Review Journal reported.

See: Target, Amazon & 4 More Retailers That Will Reward You for Turning in Your Old Stuff
Find: 8 Best Cryptocurrencies To Invest In for 2021

Initial plans call for having five to 10 stations coming online within the first six months once construction begins, Davis said. Then, between 15 to 20 stations would be added each year until full build-out is reached, he said, according to The Las Vegas Review Journal.