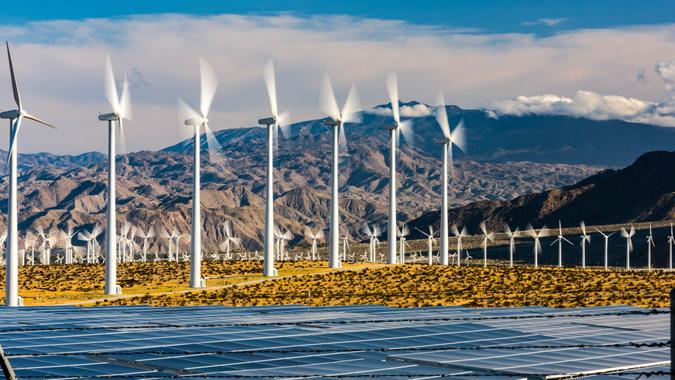 Here’s what you need to know about renewable energy and the companies that provide it.

What Is Renewable Energy?

Renewable energy is energy derived from natural sources that are replenished at a higher rate than they are consumed, according to the United Nations. Solar and wind are examples of renewable energy because energy can be harvested from these sources, and they continue to produce more.

Energy that is derived from fossil fuels, on the other hand, is not renewable. Oil, gas and coal are used to produce energy, but these resources are finite — there is only so much of them, and once they are used up, they cannot be replaced. In addition, these kinds of fuels emit greenhouse gasses when they are burned, further harming the environment.

There are several different kinds of renewable energy, each with its own advantages.

Solar energy is intercepted by the earth at a rate 10,000 times the rate at which energy is consumed, making it the most available kind of renewable energy. It can be used for heating, cooling, electricity and fuel.

Sunlight is converted to energy through photovoltaic (PV) panels — these are the panels you see at so-called “solar farms” or on the roofs of houses — or mirrors. Solar is one of the most cost-effective types of renewable energy, and costs continue to drop as technology advances and solar becomes more widely used.

Wind turbines convert energy from moving air to usable energy. Wind energy can be harnessed on land or in offshore water. Offshore wind farms offer tremendous potential since there is no development to block the wind from reaching the turbine — and no complaints from the neighbors!

Moving water in rivers and reservoirs generates hydropower, which is currently the largest source of renewable energy for electricity. Hydropower requires more infrastructure than solar or wind energy and is impacted by drought, so it has some limitations for large-scale use.

Naturally occurring materials, such as charcoal, wood and manure — called biomass — can be used to create bioenergy and are popular in rural areas and developing countries. Greenhouse gas emissions are created by burning biomass, but not at the same high levels as fossil fuels. It is most suited to smaller applications in rural areas.

The heat from the earth’s interior is extracted via wells to create geothermal energy. This method has been used to generate electricity for over 100 years.

Companies that create renewable energy are becoming popular as the importance of this energy source becomes more apparent.

First Solar, Inc. (FSLR) provides PV solar panels to utilities, developers, distributors, commercial and industrial applications and more. The company, which was founded in 1999, had $2.9 billion in net sales in 2021. The company has approximately 9 GW of manufacturing capacity worldwide, and First Solar modules can be found in more than 45 countries.

The company has set a goal to eliminate carbon emissions from its operations by 2045. Its plan will use a mix of wind, solar, nuclear, battery storage, green hydrogen and other renewable sources to generate energy that is free of carbon emissions. The company cites studies indicating that its “Real Zero” plan could create up to 150,000 jobs and increase GDP by $15 billion in Florida through 2045.

NextEra Energy is down for the year, but not as much as some companies. It traded at $81.08 on Sept. 27, 2022, down from $91.66 at the beginning of the year. The company’s forward dividend is $1.66, with a yield of 2.01%. Fifteen analysts have made their recommendations for NextEra in September. Of those, five rate it a strong buy, eight rate it a buy and two recommend holding it. The average 12-month price target is $96.99.

Brookfield Renewable Partners LP (BEP) has a portfolio of hydroelectric, solar, wind and storage facilities in North America, South America, Asia and Europe. Brookfield has approximately 21,000 megawatts of generating capacity, including 8,100 MW of hydro from 229 generation facilities; 5,400 MW of wind capacity; 2,600 MW of installed solar capacity, 1,400 MW in it distributed generation portfolio and 2,700 MW in its pumped storage portfolio.

Just four analysts made their recommendations in September — two strong buys, one buy, one hold — but 13 analysts followed it in August, with 10 rating it a buy, one rating it a strong buy and two recommending holding. The average 12-month price target is $41.88.

SolarEdge is down slightly year to date. It was trading at $282.45 at the beginning of the year, and, on Sept. 27, 2022, it closed at $249.58. Twenty-seven analysts reported on SolarEdge in August, with six rating it a strong buy, 14 rating it a buy and five recommending that investors hold the stock. Two rated it an underperformer. The average 12-month price target is $357.50.

If you don’t want to put all your eggs into one renewable energy basket, consider the iShares Clean Energy ETF (ICLN). This exchange-traded fund tracks the results of an index of global equities in the clean energy sector. It holds positions such as Enphase Energy, Inc., SolarEdge Technologies, Inc., First Solar, Inc., Consolidated Edison, Inc., Plug Power, Inc. and more.

The future of energy is renewable, and these companies are at the forefront of the technology that will make this possible. This sector is one to watch as we move toward more sustainable methods of heating our homes and driving our cars.