Beyond Meat Burger vs. Beyond Meat IPO: How Much Would You Have If You Put Your Dinner Money Into the IPO? 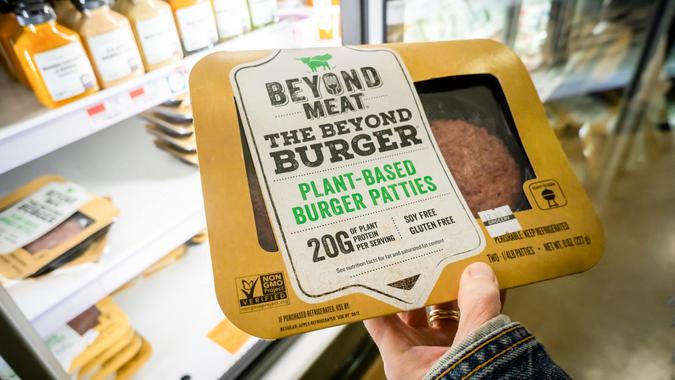 Beyond Meat has made waves in the food industry by serving up plant-based products that mimic the characteristics of real beef. Proponents swear the company’s products are healthier and taste just as good, if not better, than real beef. Shares of Beyond Meat stock have made waves of their own, as the company’s 2019 IPO was the best-performing U.S. IPO since 2000, and shares have continued to rise since then. One way to spell out just how great Beyond Meat’s stock performance has been is to imagine a hypothetical scenario in which an investor purchased shares of the company’s stock instead of one package of its main product. Here’s how all of the math breaks down.

Find Out: How Much Money Would You Have: Tesla Model S vs. Tesla Stock
And More: What If You Had Invested In Apple Stock Instead of Buying the First iPhone

Cost of Beyond Meat Burger

Tips: How To Diversify Your Portfolio by Investing In Small Businesses

Price of Beyond Meat Stock

Helpful: Answers to the Investing Questions You’re Embarrassed To Ask

The cost of a packet of Beyond Meat Burgers can vary based on which store it is at and which ongoing promotions are affecting its price. Beyond Meat has reduced the cost of its burgers since it originally began selling them, however, so it’s fair to say that the price of the patties has, in many cases, gone down slightly since they were first introduced.

Beyond Meat stock, on the other hand, has been an absolute home run. Although shares can be volatile, those who bought at the IPO price and held on have been richly rewarded. As of the close of business on June 23, 2021, Beyond Meat shares traded at $147.44. While well below the company’s 52-week high of $221, investors in the initial IPO have made nearly six times their initial investment at current levels. Even investors who took profits on the first day made out handsomely, as the stock opened at $46 per share and closed its first day of trading at $65.75, up 163% from its IPO price.

More Help: Top Investing Tips for Those Who Don’t Follow the Market

A hypothetical investor who chose to buy shares in the Beyond Meat IPO as opposed to buying a package of the company’s plant-based burgers would be sitting pretty at today’s prices, at least in terms of percentage gain. Though the dollar amounts involved would have been small, that initial $4.34 investment into the company’s stock would now be worth $25.60, or nearly six times more valuable.

Find Out: If You Invested $1,000 in These Cryptocurrencies a Year Ago, Here’s How Much You’d Have Now

No one would have gotten rich by purchasing a fraction of a share of Beyond Meat stock, even at its IPO price. However, if you imagine a scenario in which an investor bought 173 shares in the IPO instead of almost 1,000 packages of Beyond Meat, the numbers start to get more meaningful. At those levels, a $4,325 investment would have turned into $25,507, for a net profit of more than $21,000. At the company’s 52-week high of $221 per share, that investment would have risen to $38,233.

The bottom line is that investing in the long-term growth of a company is usually more profitable than buying its products. Granted, you can’t consume and enjoy 173 shares of stock, but at its peak price, you could have converted your Beyond Meat shares into over 8,800 packages of the company’s burgers. Even if you ate one package a day every day, you’d be looking at over 24 years of burgers in your pantry.