How Much Is Microsoft Worth? 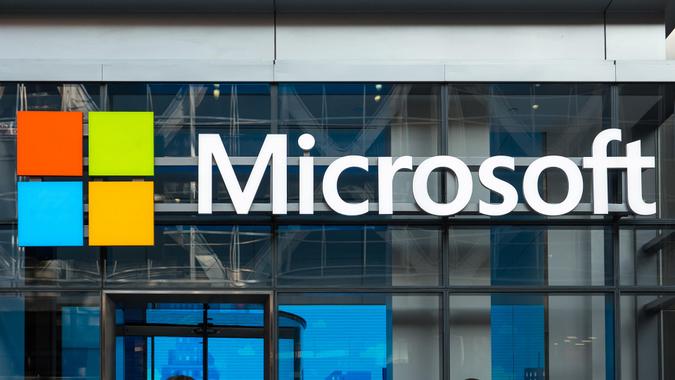 Microsoft was born in an Albuquerque garage in 1975. Co-founders Bill Gates and Paul Allen wanted to create software to run on an early personal computer known as the Altair 8800. The name “Microsoft” comes from a mash-up of “microprocessors” and “software.” Like many successful tech companies, Microsoft’s growth was fast and furious.

By 1980, the company had struck a deal to provide the operating system for IBM computers. Windows was released in 1985, transforming the computer world to this day. By the late 1980s, Microsoft was already the world’s largest personal-computer software company.

Now, the company is in a daily battle with Apple for the title of the world’s most valuable company.

Here’s a snapshot of the current state of Microsoft, along with a discussion of the company’s history, value and future outlook.

On April 25, 2019, Microsoft made market history when it was valued at $1 trillion for the first time. As of the close of business on Oct. 4, 2019, its value had climbed to $1.042 trillion, and now it’s well over $2 trillion. But what does it mean to say a company “is valued” at $2 trillion? Market pundits use market capitalization to determine how much a company is worth.

Market capitalization is a way to make apples-to-apples comparisons of the sizes of various companies. Berkshire Hathaway, for example, had a closing price of $436,250 per share on Oct. 28. Its market cap, however, was only $656.22 billion, in spite of its enormous per-share price. Market cap helps investors evaluate the different sizes of companies, regardless of their share prices.

By way of comparison, the price/earnings ratio, which is another popular valuation method, is also closely tied to a company’s market share price. The P/E ratio also relies heavily on a company’s earnings, however, which some investors feel is a more important determinant of a company’s valuation. Microsoft’s P/E ratio is 36.28.

Investors use various metrics to value companies, but in terms of market capitalization — which is one of the most popular — Microsoft is currently the second most valuable company in the world. With its market capitalization topping $2 trillion, Microsoft is an enormous giant of a company by any metric. Yet, investors can still buy into the company for less than $352 per share, as of Oct. 28.

Microsoft’s market cap varies from moment to moment based primarily on its share price. Although an increase in outstanding shares could also increase its market cap, that type of change occurs far less frequently than a change in share price, which can occur in less than one second. Thus, the ups and downs of Microsoft’s share price can result in a wide valuation range for the company.

Microsoft’s Net Worth Is Approximately $456.132 Billion

In its simplest form, net worth is simply a company’s assets minus its liabilities. By this metric, which is also referred to as shareholders’ equity, Microsoft’s net worth as of the quarter ending June 30, 2021, was $141.988 billion.

Of course, methods of determining the value of a company are wide and varied, each with its own merits and blind spots.

For some investors, net worth is a much more compelling valuation than market cap.

Microsoft co-founders Bill Gates and Paul Allen met in Seattle as teenagers in the late 1960s. When a computer arrived at their school, it was a momentous occasion, as computers were rare and expensive in those days. Soon, Gates and Allen were spending all of their free time working on and with computers.

Gates admits that he looked up to Allen, who was two years older than him and had an obsession with how computers would change the world. When Allen showed Gates a newspaper article about how the Altair 8800 had just been released, the duo felt they were already behind. Gates immediately dropped out of university and co-founded Microsoft with Allen.

Microsoft is a vast company, but it breaks down its operating revenue into three broad segments: Productivity and Business Processes, Intelligent Cloud and More Personal Computing.

Microsoft Office and LinkedIn are among the revenue producers in the Productivity and Business Processes segment, while Intelligent Cloud encompasses server products, cloud services, including Azure, and Enterprise Services. The More Personal Computing segment includes devices, such as the Microsoft Surface, the Xbox and all Windows operating system-related revenues.

Here is the revenue reported by operating segment for the fiscal year 2021, which ended June 30, 2021:

All in all, the company reported annual revenue of approximately $168.1 billion, an increase of 18% from 2020.

If you own a mutual fund, you likely own a piece of Microsoft yourself. Here’s a look at what percentage of the company is owned by popular mutual funds:

All of these shareholders may change their level of investment at any time — even dropping it down to 0%. But since Microsoft is such an important company to the market overall, these percentages are not likely to change by a great amount. This lack of change is particularly true for the index funds on the list, as by fund mandate, they are required to match the company’s weighting in their respective index.

How Does the Future Look for Microsoft?

It’s hard to argue against the merits of a company laying claim to the title of being the second largest in the world. Clearly, Microsoft is a hugely profitable company. If you have ever worked on a computer, it’s highly likely you have used Microsoft products.

Stocks that are market leaders often tend to continue to lead, and as the saying goes, the rich tend to get richer. But what are the nuts and bolts when it comes to the future of Microsoft?

If judging by recent trends, the future seems to look rosy for Microsoft. Despite supply chain problems and chip shortages resulting from the pandemic that likely are causing pain for device makers, Windows licensing sales to device makers were up 10% in the first quarter of the company’s 2022 fiscal year, CNBC reported. However, the company cautioned that its advertising revenue, which makes up about 6% of Microsoft’s total revenue, could take a hit if suffering businesses scale back their advertising.

That said, Microsoft received a “buy” or “strong buy” rating from 27 of 34 analysts on Yahoo Finance, and six of the remaining seven rated it “hold.” Just one rated the stock a “sell.” The current average target price is $339.26, about 5% above its current price.

Should I Invest In Microsoft?

Investing in a specific stock involves much more than analyzing the profitability of a given company. Your financial situation plays a large part in determining whether or not you should invest in stocks at all — let alone invest in a specific stock like Microsoft. Working with a fiduciary financial advisor is a good way to delineate your investment objectives, risk tolerance and personal financial situation to determine if investing in stocks is a good match for you.

Regarding an investment in Microsoft specifically, the company seems like a good bet as part of a diversified portfolio. It continues to report strong earnings, and Wall Street analysts tout the stock as a buy or strong buy, targeting 12-month price gains of about 5%.