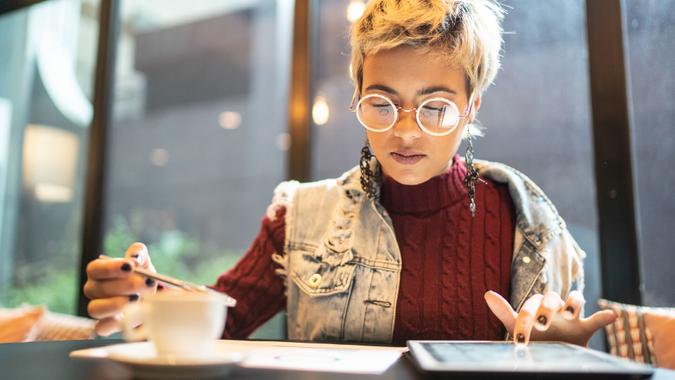 After millions of Americans received several stimulus checks and the pandemic largely kept people indoors and businesses shut, one thing is clear — Americans are currently sitting on a ton of cash.

See: 27 Things You Should Never Do With Your Money
Find: Money Advice Experts Would Give Their Younger Selves

According to the Commerce Department, personal income was up a seasonally adjusted 10% in January from December 2020, driven by the second round of stimulus checks. In March, personal income increased 21.1%, also driven by more stimulus check rollouts. Spending also increased, with a gain of 2.4% for the same month. Notably, Americans had $6.04 trillion in savings in March, and the personal savings rate (personal savings as a percentage of disposable personal income) was an incredible 27.6%. In April, this shot even higher, to just past 33%.

To put this in perspective, January’s personal savings rate was 20.5%. At the time, The Wall Street Journal reported that “the only time the saving rate was higher before the pandemic was during World War II.”

Although the country did not go through a war this time around, a different kind of strife prevented people from going out and spending their money. Now, Americans have built up more cash than seen in generations, and most of it is sitting in their bank accounts.

While a spending boom is likely in the coming months as the economy opens back up, some might think it best to keep their savings on hand longer because unemployment is still relatively high.

U.S. investors had an “elevated” 19% of their portfolios in cash in April despite an improving economy and rising stock prices, according to a UBS survey, Kiplinger reports. This could be because investors are still skittish to expose themselves too much too soon after a year of high uncertainty.

This plan could backfire, though. While 2020 taught us that having enough money on hand to cover expenses in case of an emergency is paramount, according to these statistics, Americans might be exceeding the ideal amount.

See: What Monopoly Teaches You About Real-Life Money
Find: Here’s How Much Emergency Cash You Need Stashed If an Emergency Happens

In the past, financial advisors recommended having six to nine months of living expenses in cash. What this means specifically is nine months of mortgage and other bill payments, some discretionary income and extra cash for unexpected expenses. That figure is now likely more towards 12 months, as the pandemic also demonstrated that the economy can shut down for prolonged periods of time not ever experienced before.

Beyond this, having as much extra cash on hand as Americans are currently projected to have is not just unnecessary — it’s a bad investment strategy.

Keeping money in a savings account year over year actually results in you losing money. Especially in a year where prices have grown as quickly as they have, getting out of excess cash positions is crucial. This is because the interest rate earned in a savings account will never outpace inflation and the rising cost of goods.

See: 9 Money Moves to Make Now — If You Have $1,000 in Your Account
Find: How Long $1 Million in Savings Will Last in Every State

Your money will actually depreciate in value the longer it sits in cash. Cash loses purchasing power, and in a year where inflation has risen over 4% in the 12 months ending April 2021, yields less than zero.

Kiplinger references a UBS analysis that shows someone with a $5 million all-cash account and expenses of $250,000 per year. Those expenses increase 2% per year due to inflation. After 10 years, that same person would have only $2.5 million left after using the cash to pay down bills that now cost more due to inflation. Had that money been invested in stocks, the same money could have been expected to grow to $7 million over the same period. Keeping money in cash can actually result in you losing money.

While investing in equities might not work for everyone, there are other investments you can make without going the riskier route. Typical investment recommendations for people who have too much cash but remain weary of big investments are bond index funds, Treasuries and REITs, to name a few. These investments are safe, and they generally are seen as offering protection against inflation without keeping your money stagnant in cash.