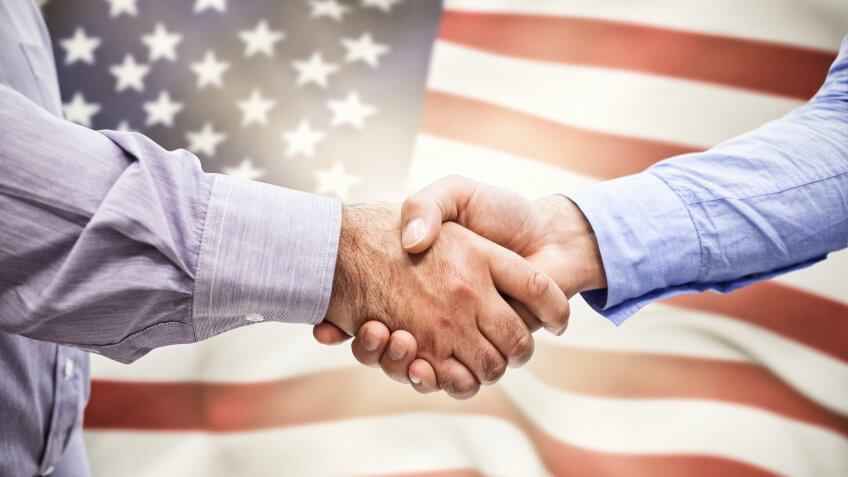 The following are seven of the strongest U.S. allies, and a breakdown of shared interests, trade relations and military cooperation. Keep reading to learn how President Trump's most valuable ventures are no longer his golf courses or real estate, but his ties with other international leaders. 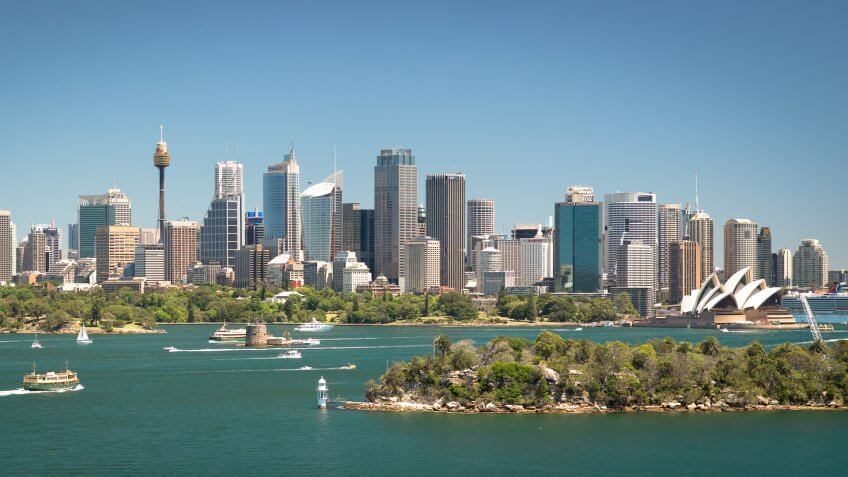 In 2015, the U.S. and Australia celebrated the 75th anniversary of their diplomatic relationship. Australia is a key U.S. ally, friend and trading partner. The foundation of their close alliance is shared democratic values, interests and cultural practices. The two countries share close defense, economic and academic ties. Along with Japan and South Korea, Australia is foremost among American allies in the Asia-Pacific region and South China Sea.

In 2015, Australian GDP was worth more than $1.34 trillion, representing 2.16 percent of the world's economy, according to Trading Economics. The 2005 inception of the U.S.–Australia Free Trade Agreement increased U.S. exports to Australia by more than 100 percent, totaling approximately $65 billion in 2016. Globally, Australia has the 12th largest economy with the sixth-highest per-capita income.

The U.S. exports many goods to Australia, including machinery, travel services, industrial supplies and materials, consumer goods and financial services. In exchange, Australia exports foods, feeds, beverages, industrial supplies and materials, as well as business and travel services to the U.S. Among businesses that manufacture goods in both countries, IBM made headlines this year when it joined other companies promising to reinvest in America following Trump's election.

The U.S. and Australia share military synergies across the globe and have fought side-by-side in every significant conflict since World War I. The 1951 ANZUS security treaty solidified the military cooperation between the two countries.

In 2014, the countries signed the U.S.–Australia Force Posture Agreement that created even closer defense and security relationships. The treaty supports the yearly transport of Marines to the coastal town of Darwin and additional rotations of U.S. Air Force aircraft to Australia. In 2017, the countries are scheduled to continue their biennial military exercise Talisman Saber, which facilitates collaboration between Australian and U.S. forces. 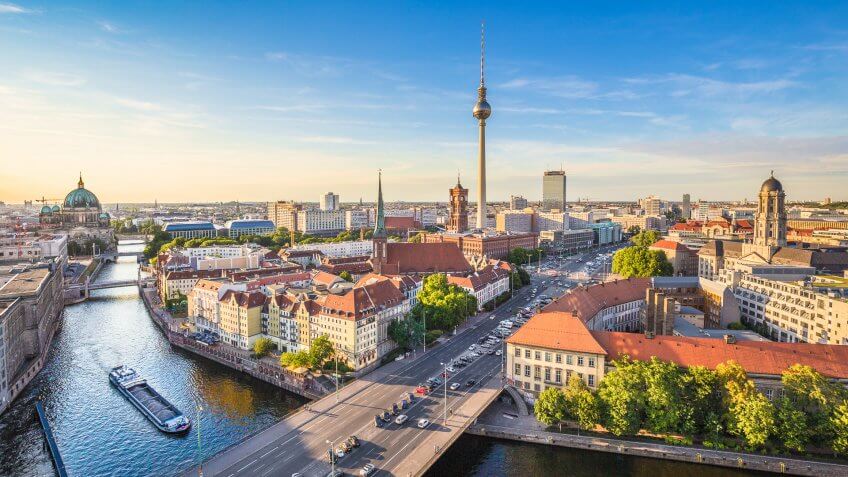 U.S.–German relations began in 1790, when the American consulate in Hamburg was established after U.S. won independence from Great Britain. In 1917, during World War I, U.S. relations with Germany were severed. In 1921, the relationship was restored, but it didn't last. In World War II, Nazi Germany declared war on the U.S., and relations again ceased.

In 2015, Germany's GDP was worth $3.36 trillion, 5.42 percent of the world economy, according to Trading Economics. The total marks a decline from the country's high of $3.88 trillion in 2014. Germany holds a position as the largest market in Europe.

In 2015, the U.S. was the fourth-largest importer into Germany, and the U.S. was Germany's greatest export market. Among the top American exports to Germany were aircraft, machinery, mineral fuel, optic and medical instruments, and pharmaceuticals. The largest import categories from Germany include machinery, vehicles, pharmaceuticals, optic and medical equipment, organic chemicals, agricultural products and private commercial services.

Today, Germany is one of the most important U.S. allies in Europe. The foundation of that relationship is rooted in friendship, trade, and political, economic and security ideals. Germany owns an important role in European affairs as a member of the G-7, G-20, North Atlantic Treaty Organization (NATO) and Organization on Security and Cooperation in Europe (OSCE).

In 2016, as chairman of the OSCE, Germany furthered the organization's mission of preventing conflict; promoting democracy, human rights and the rule of law; and encouraging open and transparent economies. These are all initiatives and values shared with the U.S. The Germany–U.S. alliance includes extensive military collaboration and a large network of U.S. military bases on German soil. 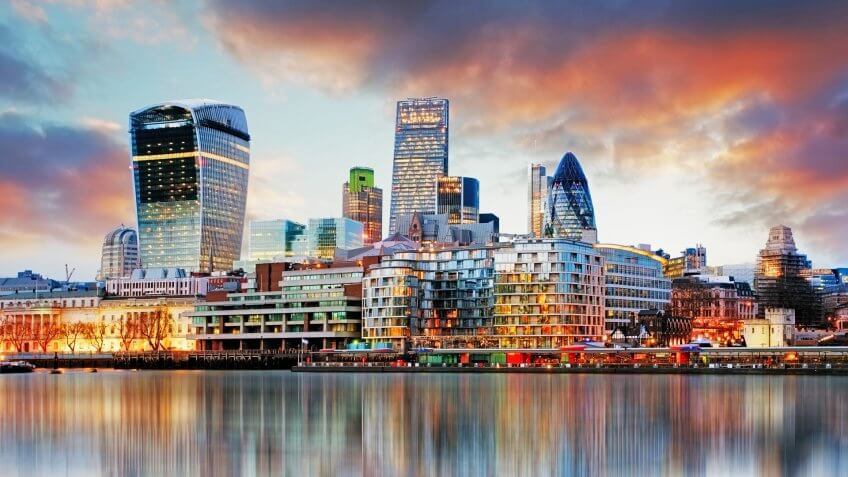 U.S.– Great Britain diplomatic relations began in 1785 and have remained consistent save for a break between 1812 and 1815, during the War of 1812. The close alliance is grounded in shared democracy, language, ideals and military support. The countries regularly consult on policy and global problems, and they share geopolitical objectives.

In 2015, GDP in the United Kingdom was equivalent to $2.86 trillion, representing 4.61 percent of the world's economy, according to Trading Economics. The United Kingdom is one of the largest markets for U.S. exports, as well as one of the greatest suppliers of U.S. imports. Additionally, the countries share the world's "largest bilateral foreign direct investment partnerships", according to the State Department website.

The U.S. and U.K. supported each other during both world wars, the Korean conflict, the Persian Gulf War, Operation Iraqi Freedom, and combat in Afghanistan. They collaborated in founding the North Atlantic Treaty Organization (NATO). The U.S. Air Force has four military bases in the U.K.

Ultimately, with Britain leaving the European Union, it's likely that there might be some changes to the relationship between the U.S. and U.K. Still, these nations are connected by shared values, culture, trade and history, and it's expected that the close alliance will continue. 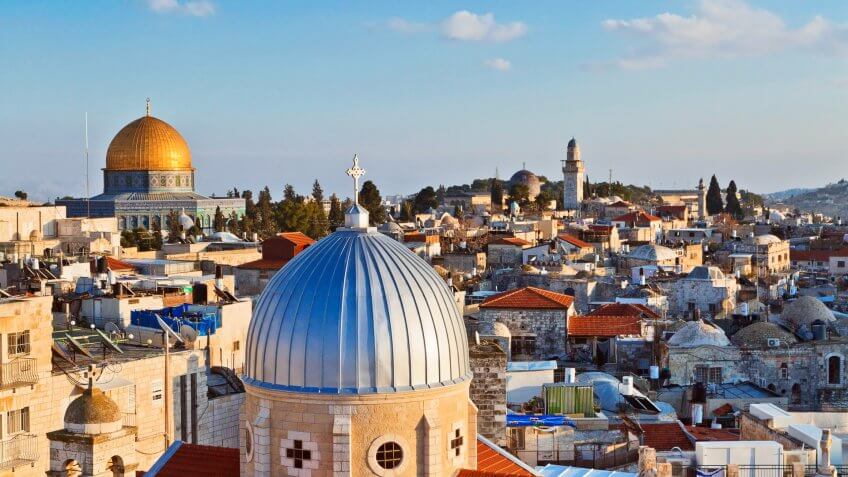 Israel is one of America's most important allies in the tumultuous Middle East region. Despite failed U.S. attempts to help create peace between the Israeli state and the Palestinians, the U.S. and Israel are important allies.

In September 2016, the U.S. finalized a 10-year, $38 billion aid package to Israel. The package represents America's largest assistance to any foreign government. The money will help Israel finance missile-defense systems that defend against organizations that engage in terrorist activities, such as Hezbollah and Hamas.

As of 2015, Israel's GDP was valued at $299.4 billion, according to Trading Economics. The number represents 0.48 percent of the world economy. U.S. trade with Israel totaled $45 billion in 2012, according to the Office of the United States Trade Representative. Israel is America's 25th largest trading partner. In 2013, the U.S. exported $14 billion in goods and services to Israel, and imported $23 billion from its ally.

In December 2016, it was reported that the U.S. Army plans to create a military base in the coastal city of Haifa as a support for U.S. troops fighting in the region.

In the News: What Trump's Proposed Border Tax Means for Your Wallet 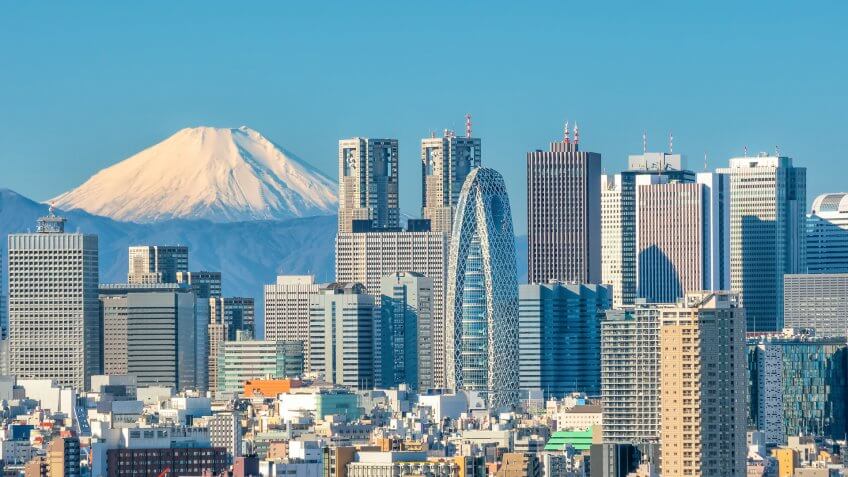 Japan is one of the most important U.S. allies in Asia. The country is an example of a longstanding democracy, and its relationship with the U.S. is crucial to security and success in Asia. The two nations share values and objectives, including a desire for a stable Asia-Pacific region, promotion of political and economic freedom, support for democracy and human rights, and a commitment to furthering global prosperity, according to a State Department fact sheet.

As an important American ally, Japan has collaborated with the U.S. for more than two decades in the areas of science and technology. Former President Barack Obama and Japanese Prime Minister Shinzō Abe cemented the relationship in 2014 with an extension of the bilateral Science and Technology Agreement for another 10 years.

Japan is an important trading partner with the U.S. Its gross domestic product was equivalent to $4.12 trillion in 2015, the most recent full-year data, according to the Trading Economics website. Japan's GDP equates to 6.65 percent of the world economy.

The U.S. exports many different goods to Japan, from agricultural products and pharmaceuticals to scientific supplies and machinery. American imports from Japan include vehicles, machinery, medical instruments and organic chemicals. Our nation's direct investment in Japan is predominantly in the finance, insurance, manufacturing and wholesale sectors, according to the State Department. Japan directly invests in wholesale trade and manufacturing in the U.S.

As a further sign of their integrated relations, the U.S. has 85 military facilities throughout Japan, according to a recent Economist article. Today, as North Korea continues to test its nuclear weapons, these military facilities have become increasingly significant. 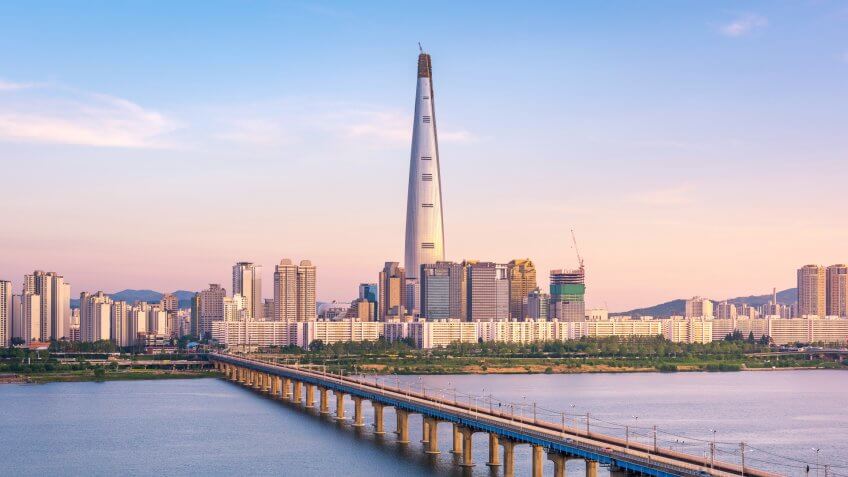 The Republic of Korea (South Korea)

Asia is a long flight aboard the pricey and luxurious Air Force One, but it's certainly worth the trip. The U.S. and the Democratic People's Republic of Korea (North Korea) have had a tenuous relationship, and America's relationship with the Republic of Korea is of utmost importance. Both countries share compatible values, interests, friendship and mutual cooperation. The U.S. and South Korea collaboratively fight regional and global threats.

The initial U.S. diplomatic envoy visited Korea in 1883, after America and Korea's Joseon Dynasty established diplomatic relations with the 1882 Treaty of Peace, Amity, Commerce and Navigation. In 1905, U.S.-South Korean relations were severed as Japan assumed control over Korea, a status that continued until 1945.

South Korea and the U.S. are important trading partners, as South Korea's economic growth continues. The 2012 Korea-U.S. Free Trade Agreement (KORUS FTA) is an important reflection of the trade relationship between the two allies. Trade between the two countries includes manufactured goods, agricultural products, services and technology. The free-trade agreement increased exports on both sides by billions of dollars and created jobs in both countries.

Additionally, the partnership between the two nations is reflected in the space, energy, health, climate change and cyber spheres. Also, of all the industrial nations, South Korea sends the highest number of students to study in the U.S. on a per-capita basis.

The U.S. maintains Army, Air Force, Navy and Marine representation in South Korea in accord with the Mutual Defense Treaty. The countries also collaborate closely on North Korean nuclear issues. Given the sensitive relationship between the U.S. and North Korea, South Korea remains a crucial ally. 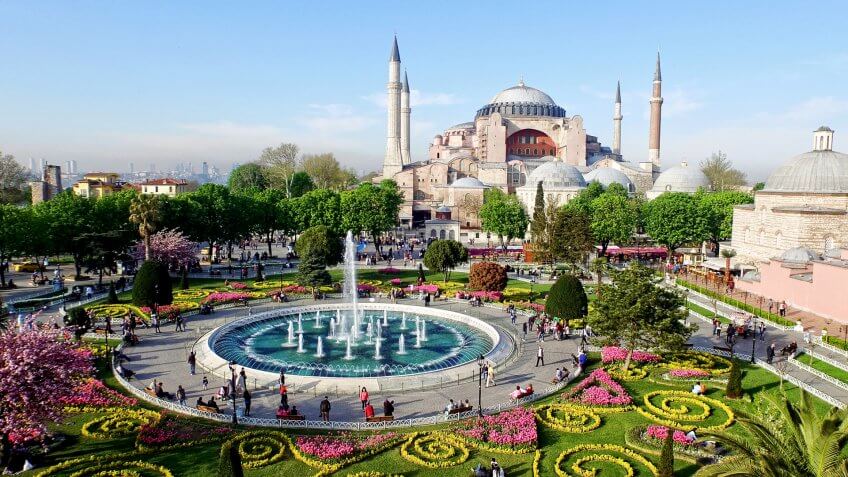 Since 1831 — when the U.S. began a diplomatic relationship with the Ottoman Empire — the U.S. and Turkey have been allies. The alliance between the two nations continued with the 1947 signing of the Economic and Technical Cooperation agreement. The countries' shared values were solidified as part of the Truman Doctrine's goal "to support free peoples who are resisting attempted subjugation by armed minorities or by outside pressures," as stated on the U.S. State Department website.

Turkey hosted the prestigious G20 in 2015, further illustrating the Turkey's importance in the international sphere. In July 2016, the U.S. condemned the coup attempt to overthrow the democratic Turkish president. Turkey's broad membership in international organizations is another sign of the country's importance to the U.S. and international community.

Given the current geopolitical climate, Turkey remains a crucial American ally in this volatile section of the globe. It's also among the cheapest countries to spend your retirement.

Up Next: How President Trump's Tax Rate Stacks Up Against His Predecessors 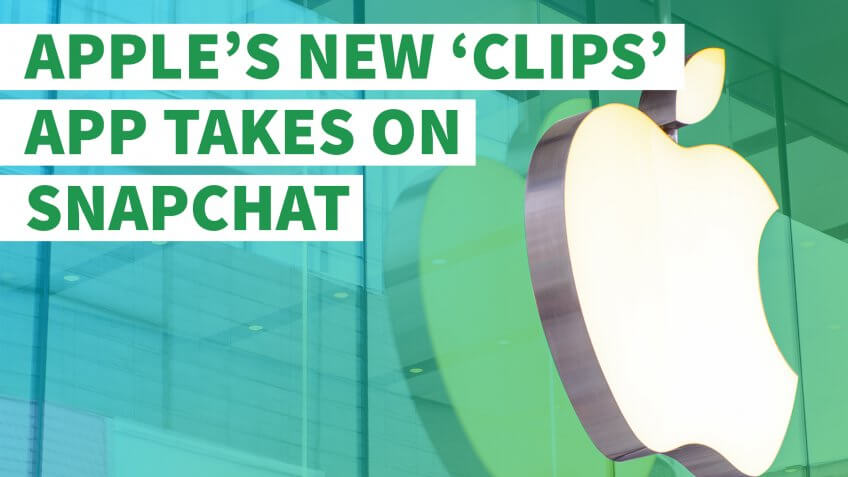 See how Apple's version compares to the video apps you know and love.

GOBankingRates > Money > Business > America’s Most Valuable Allies Around the World