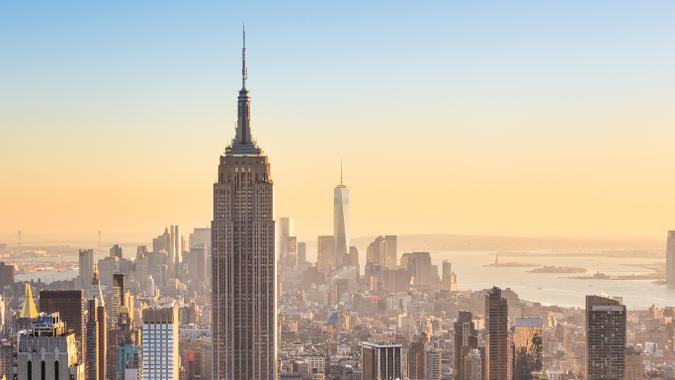 In the heart of the pandemic, several financial service firms, including big names like JPMorgan Chase, explored the thought of leaving New York. With people working from home, or even from other states, and restaurants, museums and entertainment closed, Wall Street, just like most of lower Manhattan, had become a ghost town.

See: What Realtors Say to Expect From the Housing Market for the Rest of 2021
Find: 5 Ways Our Finances Changed Over the Past Year — And Why That’s Both Good and Bad

But U.S. Postal Service numbers belie the anecdotal data. Only 2,246 people filed a permanent address change from Manhattan to Miami-Dade County, with another 1,741 moving to Palm Beach County, Bloomberg reports. While this doesn’t account for those who lived in surrounding suburbs or the other boroughs and commuted daily to the Big Apple, it only amounts to 9% of all out-of-state moves for Manhattanites. That’s just a 3% increase from 2019, Bloomberg says.

However, the impact on New York City income could be significant, Bloomberg says. The top 1% of wage earners in New York earned $133.3 billion in total, accounting for 42.5% of the city’s taxes, according to the Independent Budget Office.

What’s more, Forbes reports, many companies and their leaders who did leave may be set to return soon. This could be a “strong sign the pandemic is ending,” Forbes reports.

Jason Mudrick, the founder of Mudrick Capital Management, is one executive with an optimistic outlook. “It will be like the Roaring Twenties — you’ll see a resurgence here like never before,” he said in a Bloomberg interview.