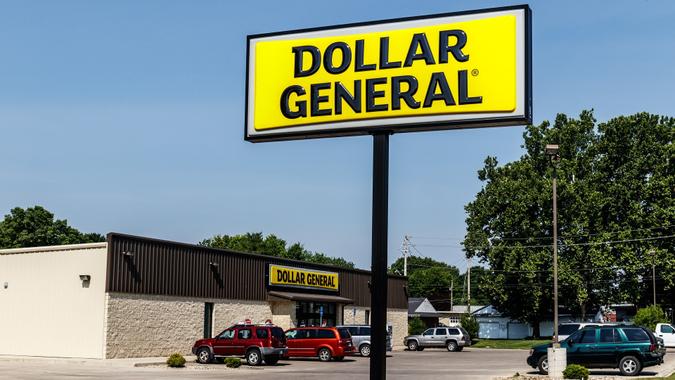 Dollar General announced a major change in the company’s Q1 earnings call on May 26. The retailer is currently testing self-checkout at more than 8,000 stores and has decided to launch a pilot of stores that are entirely self-checkout, said Jeff Owen, Dollar General’s chief operating officer.

Learn: 11 Things You Should Never Buy at Walmart
Explore: 6 Signs You Can’t Afford To Retire

Owen also stated that this layout will be tested in about 200 stores throughout 2022.

This plan is part of the company’s Fast Track initiative, added Owen, with goals that include “increasing labor productivity in our stores, enhancing customer convenience and further improving on-shelf availability.” The first phase of the initiative involves improvements to inventory management and stocking while the second phase includes self-checkout.

Dollar General believes that a 100% self-checkout option “could further enhance the convenience proposition” while also allowing store associates to focus on customer service. A self-checkout option is also expanding to 11,000 stores by the end of the year, Owen clarified.

In the first quarter of 2022, 239 new Dollar General stores opened, with plans to expand to an additional 1,110 by the end of the year. A majority of these stores will be in the larger 8,500 square foot footprint, which will allow the retailer to offer a wider product selection to its customers.

Dollar General saw comparable-store sales take a slight dip of 0.1% year-over-year during Q1 and operating profits drop by 17.9%. Retail Dive noted that this could be a sign that the company is having trouble generating sales organically and is now depending on these new store locations.