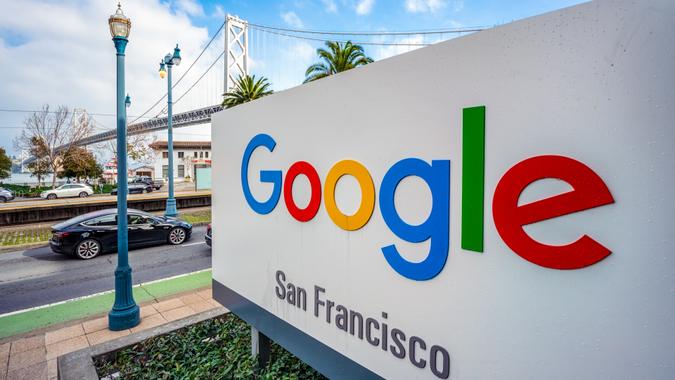 Google’s ubiquity seems to qualify it as less of “a search engine” and more so “the search engine.” Its cultural imprint runs so deep that “Google” has become a verb, and many people use it as their default browser page. With a share of the global search engine market that comes out to about 92%, according to Statcounter, the fact that Google is an important part of the daily lives of most people can’t be understated. GOBankingRates googled some figures on Alphabet, Google’s parent company, to see what this importance means for investors.

Alphabet announced its fourth-quarter results for 2021 on Feb. 1, beating Wall Street revenue and profit expectations. The company generated revenues of about $75.3 billion, based on record sales of Pixel as well as YouTube’s strength, growth in the Google Cloud division and robust advertising growth despite changes to privacy settings in Apple’s iOS 14 that affected ad revenue on some online platforms.

In early 2020, Alphabet became the third American tech company to reach a $1 trillion valuation, joining Apple and Microsoft — Tesla and Amazon since have joined the club.

Although Alphabet shares were recently at a 52-week high of $3,042, the company is susceptible to market volatility, perhaps as a result of competing with tech giants like Apple or Amazon. Alphabet’s share price was $2,002.02 at its 52-week low. Swings in share price have, in turn, caused its market cap to vary widely over the same period. At its current share price of $2,682.60, Google has a market capitalization of $1.774 trillion.

Forbes named Page and Brin among the top 10 on its list of the world’s richest billionaires, with net worths of $114 billion and $109.8 billion, respectively, as of Feb. 12.

Alphabet’s fourth-quarter 2021 earnings report highlighted several categories that contributed to its success. The following operating segments, as described in the earnings report, are responsible for its revenue:

“In 2022, we’ll stay focused on evolving our knowledge and information products, including Search, Maps and YouTube, to be even more helpful. Investments in AI will be key, and we’ll continue to make improvements to conversational interfaces like the Assistant,” Alphabet CEO Sundar Pichai said in the company’s Feb. 1 earnings call.

GOOGL has a high level of institutional ownership at 79.30%. The top 10 shareholders of Alphabet’s Class A stock are:

Alphabet has outperformed other FAANG stocks like Facebook and Netflix over the past year. Based on five analysts, Alphabet is a “buy” to “strong buy,” with an average price target of $3,506.11, according to Yahoo Finance. Alphabet’s current share price of $2,682.60 leaves plenty of room for growth. Based on historical share appreciation, impressive revenue news and future potential from investments such as YouTube and AI, Alphabet may be worth the money as a long-term investment.

Data is accurate as of Feb. 11, 2022, unless otherwise noted, and subject to change.