The Home Depot offers customers a convenient way to purchase home improvement tools from its more than 2,200 locations in North America. A household name among craftsmen, builders and DIY-ers, The Home Depot often beats its main competitor Lowe’s in terms of value; in 2017, Forbes listed both companies among the world’s most valuable brands, with The Home Depot placing at No. 33 and Lowe’s placing at No. 78. The numbers listed below can help explain why The Home Depot is so popular.

Market capitalization is determined by the total dollar value of a company’s outstanding shares, which helps investors determine the relative size of a company. The Home Depot’s market cap range, with a 52-week high of $239.5 billion, reflects how the market as a whole values the company, and investor differences mean the value is in contention.

Try These: 20 Home Renovations You Can Make for $1K or Less

The Home Depot’s value has been rising since 2012 when the housing market saw improvement, and since 2014, which saw a push for new housing.

The company’s growth has been driven in large part by its willingness to dive into e-commerce. In February 2018, The Home Depot reported that the company had surpassed $100 billion in sales.

Founders Bernie Marcus and Arthur Blank first conceptualized The Home Depot in 1978 based on their own experience as DIY enthusiasts. After securing the proper financing, they opened the first two stores in Atlanta in 1979, and the company quickly went public in 1981. The Home Depot often contributes to philanthropic causes through The Home Depot Foundation, in particular, focusing on projects for veterans that include pledging money to veteran-related causes.

Should You Invest? The Most Anticipated IPOs of 2018

The Home Depot’s investment makeup is similar to its rival Lowe’s. Big banks like Wells Fargo & Co. and JPMorgan Chase & Co. have a stake in the company, and investment company The Vanguard Group Inc. is — like it is for Lowe’s — The Home Depot’s largest shareholder, with 80,973,105 shares as of December 2017. 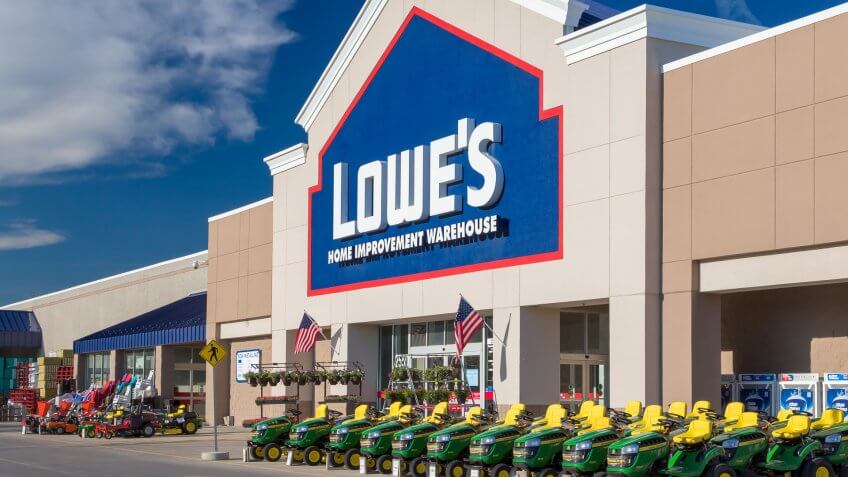 How Much Is Lowe’s Worth?

Learn about Lowe's revenue and other stats before investing.

GOBankingRates > Money > Business > How Much Is Home Depot Worth?