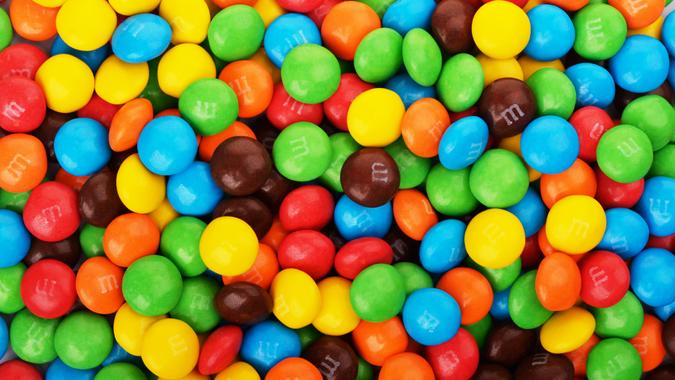 Cereal rakes in more than $11 billion annually in the U.S. alone. Given that fiercely competitive market, the brightly-colored boxes and cartoon mascots are fiercely competing for shoppers’ attention. The same can be said of candy, with $15 billion spent on just chocolate, and the industry as a whole clocking in close to $20 billion in 2020. And it’s only going up from there.

Of course, one tried-and-true method of catching the public’s attention is the limited edition product. Sometimes tied into a special product or promotion, and almost always offered for a brief window of time, limited editions have existed for decades — all to varying degrees of success, of course. Here’s a look at some of the best-known limited-edition cereals and candies with an eye to how popular they were at the time, how pricey they are now, as well as a look at how their respective companies fared following their introduction.

Find Out: Celebrities Who Are Richer Than You Think
Check Out: 12 Essential Money Tips for Every Phase of Your Financial Life

2003 was a good year for General Mills overall, thanks to an acquisition of Pillsbury helping see their profits increase about 60 percent. Even as General Mills’ profits continued to grow through 2009, with a net sales bump of 8 percent in 2009, Green Slime never seemed to be a big contributor. It’s been discontinued for over a decade.

Halloween’s inarguably the biggest holiday when it comes to candy, so in 2018 Hershey’s released a glow-in-the-dark line of some of their most popular products, including Reese’s Peanut Butter Cups, Kit-Kats and their classic Hershey bar.

The gimmick seems to have paid off, as the line has been re-introduced every Halloween since, and the candy is currently available on Hershey’s online store. Hershey’s profits have continued to grow since the product’s been around, coming in at just under $7.8 billion in 2018 and $8.1 billion in 2020.

A seasonal endeavor from General Mills in 2018, this winter-themed edition of Lucky Charms featured chocolate corn puffs and marshmallows shaped like both snowflakes and snowmen. It was something of a hybrid between two prior limited-edition endeavors, Winter Lucky Charms in 1999 and Chocolate Lucky Charms in 2005.

The company’s sales slipped slightly in 2018, despite an overall strong performance, and the cereal vanished when the season changed. A family-sized box was just under $4 when they launched. One can be found on eBay for around $20.

Obviously part of a holiday-themed promotion, Butterfinger veered into peanut butter cup territory and shaped the mold like a snowman. The candy boasted no artificial ingredients and mixed the brand’s usual crunchy peanut butter with a smoother variety.

Nestle saw a slight dip in overall profits that same year, despite an uptick in sales. As far as the snowman peanut butter cup, there are few to be found in the aftermarket.

See: Here’s How Much Jennifer Aniston and Other Actors Get Paid for Their Reruns

Eager to be part of the general pumpkin spice trend that’s sweeps the nation at the end of summer each year, Kellogg’s got in on the action with Special K. First introduced in 2016, the seasonal product is always a ‘while supplies last’ situation.

The company’s profits have risen steadily since the cereal was introduced. It saw a 4.16 percent jump in profits from June 2019 to June 2020. It would appear the pumpkin spice craze is still paying off.

M&Ms have continued to flirt with experimental concoctions over the years, though the White Chocolate Carrot Cake might be one of their most noteworthy. Released in time for Easter back in 2013, and available only at Walmart in medium-sized bags, the candy disappeared quietly not long after.

Mars was named one of the 100 best companies to work for that same year, and in 2014 Topeka, Kansas was home their first new factory in 35 years. Were these special edition M&Ms part of that success? It’s hard to say.

See: 50 Easy Things You Should Do To Save Money

Released in 2019 in celebration of National Cereal Day, this pair of sweet and savory offerings made headlines at the time for their sheer novelty. These cereals were only available in a handful of stores, with Walmart being the only nationwide chain to carry them.

Post lost money in 2019, but the cereal was a hit simply due to its hard-to-find, novelty status. Boxes range between $40 to $50 on eBay today.

The candy giant didn’t just go big when it made some of its line glow-in-the-dark. Back in 2017, Hershey released Flavors of America, a group of six limited edition candy bars designed after the distinct flavors of certain U.S. states. There was a cherry cheesecake Hershey bar for New York, a BBQ-flavored PayDay for Texas and strawberry Kit-Kats repping California.

The promotion seemed to be popular, with plenty of coverage when it launched, and few examples on the aftermarket. Meanwhile, with Hershey’s profits have steadily increased the last few years — 2017 put them at almost $7.8 billion.

Save: Budgeting 101: How To Create a Budget You Can Live With

Coming out in late summer of 2018, this Halloween-themed take on Reese’s foray into the cereal market (via General Mills) featured the usual chocolate and peanut butter puffs in the shape of bats. They were popular enough to launch again in 2019, 2020, and again this year.

The cereal’s limited availability has made it a collector’s item, with unopened boxes ranging from $20-$45 on eBay.

Like candy corn, Peeps have always been a divisive candy. Loved by some, reviled by others, and once mostly limited to Easter time. However, Just Born Quality Confections, the company behind the fluorescent marshmallow treats, started to expand its market in 2017. That year, they introduced a whole line of fall-themed flavors, including caramel apple, maple brown sugar and even candy corn (dipped in white fudge).

It certainly got people talking, as Peeps tend to do, especially considering that the baby chick-shaped candy was already more popular than ever that year. It’s likely that expanding their offerings didn’t hurt their sales, either.