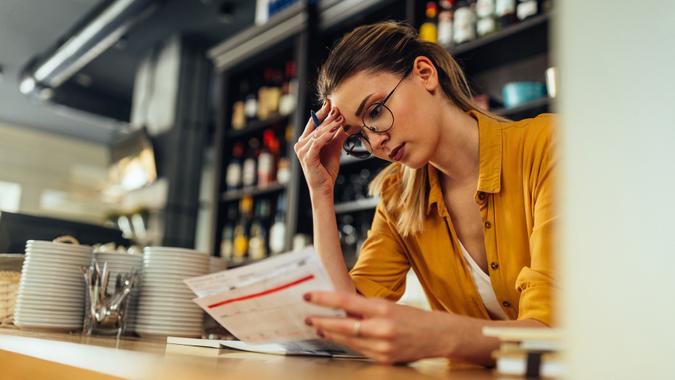 Running a small business has never been easy, but this year the stress has been ratcheted up to levels not seen since the Great Recession. The combination of COVID-19, high inflation and labor shortages — along with the usual stresses of tax season — have left many small business owners worried about how they will survive, according to a couple of recent surveys.

One of the surveys, from digital insurtech company NEXT Insurance, found that more than one-third of small businesses (35%) are considering shutting down. Only 29% of the 1,000-plus respondents said they feel optimistic about an economic recovery in the next 12 months.

A separate survey from Veem, a provider of B2B payment solutions, found that about one in five small businesses owners has considered taking out a loan to help with cash flow to counter growing inflationary pressures.

One of the major problems is a nationwide labor shortage caused in part by the Great Resignation. Nearly half of respondents in the NEXT survey are working more hours in 2022 vs. past years, with one-third saying they are performing duties that were typically handled by someone else.

More than one-quarter (29%) of small business owners have decreased their own salaries, while a similar percentage say employee turnover is higher this year than last year. Overall, small businesses are paying an average of about $24 an hour this year — up from $22 an hour two years ago.

Veem CEO Marwan Forzley said about one-quarter of respondents are concerned about whether their businesses will survive amid inflation.

“Inflationary pressure will continue to have a dominant impact on the daily workflows of small business owners looking to build out and expand their business,” Forzley in an email statement to GOBankingRates. “We see small business owners looking to connect with resources around the world as they continue their entrepreneurial journey and weather this high inflationary environment.”

Meanwhile, tax season has created additional stress on small businesses. Nearly one-quarter (22%) of respondents in the NEXT survey said they are feeling more stressed this tax season than in past years. That’s partly because of new tax changes in 2022.

These struggles should be taken as a warning sign of much deeper economic problems, according to Suzanne DuFore, Director of Research at NEXT Insurance.

POLL: How Much Do You Expect Your Tax Refund To Be This Year?
Discover: The Hidden Costs of Running a Small Business

“Small businesses are often the canary in the coalmine for our economy,” DuFore said in a press release. “If they’re feeling the intense stress and pressure from these major societal trends that show no signs of slowing down, it’s critical for us as consumers and leaders in financial services to be ready to help them out in any way we can.”