10 Women Who Have Made Financial History 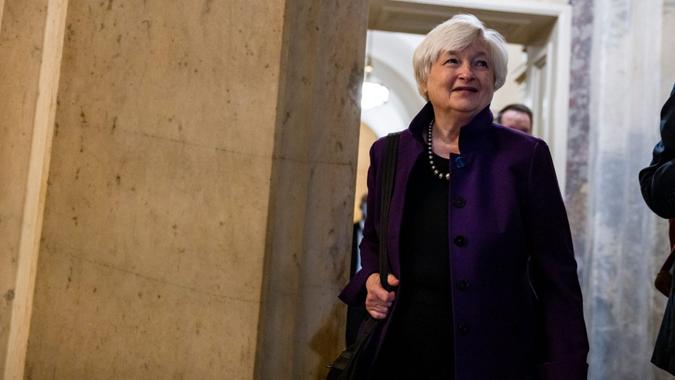 No, there aren’t any faces of women gracing American paper currency — yet — but that doesn’t mean women haven’t made key contributions to the financial history of the United States. From advocating for the financial rights of women to setting examples of prudent investment, to running corporate giants to making financial policies, women have played key roles in the nation’s monetary system over the past 345 years.

In recognition of Women’s Equality Day, GOBankingRates took a look at 10 women who have made financial history. There isn’t a Rockefeller or a Carnegie or a Vanderbilt or Morgan on the list, but some of these names are already recognizable. And for those who aren’t familiar with the backgrounds of these women, now’s a good time to learn about them.

Abigail Adams (1744-1818) was the second first lady of the United States and the mother of a second president, but she had another title that isn’t widely known: investor. As his career as a lawyer and statesman kept him busy, John Adams ceded management of their family farm and business dealings to his wife. She considered her husband’s property to be hers, too, even though women didn’t have many property rights at the time. She also invested in government and war bonds, considered a risk at the time, and quadrupled the family’s money. Abigail was an unofficial advisor to her husband on many matters and stressed women’s rights to him.

Did You Know: Surprising Ways Gen X and Millennials Are Worlds Apart Financially

Hetty Green (1834-1916) is believed to have been the wealthiest woman of her generation in the United States. Before Green’s birth, her family became rich in the shipping industry, and her grandfather taught her early on about finances. When her family bought her a fashionable wardrobe to attract a rich husband, she sold it and used the proceeds to buy bonds. She lived frugally despite having amassed millions through real estate, proceeds from loans and other investments, and she died with an estimated $100 million in liquid assets — worth $2.4 billion today — plus more in land and other holdings.

Maggie Lena Walker (1864-1934), the daughter of slaves, went to work to help her mother after her father died. She leaned toward accounting, math and entrepreneurism and founded an insurance company for women. In 1903, she started the St. Luke Penny Savings Bank in her native Richmond, Virginia, becoming the first woman to charter a bank in the U.S., with the goal to encourage saving and economic independence in the Black community. She also held other prominent positions, including vice president of the Richmond chapter of the National Association for the Advancement of Colored People. As for the Penny Savings Bank, a merger spawned the Consolidated Bank and Trust, which existed until it was bought by Premier Bank in 2009. Until then, it was believed to be the oldest continuously owned Black bank in the U.S.

Read More: Jaw-Dropping Stats About the State of Retirement in America

Madam C. J. Walker (1867-1919) was dubbed “the first Black woman millionaire in America.” She earned her wealth by making hair care products for Black women, driven by her own experiences with hair loss. At the time she started the company in the early 1900s she had just $1.05 in savings. Once established, she brought in beauty “culturalists” to sell her products, and at the company’s peak, employed more than 3,000 people — most of them Black women. She shared her profits with other members of the Black community to fund scholarships for women at the Tuskegee Institute, and she also made large donations to groups that include the NAACP and other charities.

Fun Facts: The Average Social Security Check the Year You Were Born

Muriel “Mickie” Siebert (1928-2013) was the first woman to become a member of the New York Stock Exchange, but getting there wasn’t easy. In the early 1950s, she moved to New York and lied about having a college degree to get her first job. Upset about earning less than men who were doing the same work, she later asked a friend how she could make as much as a man, and his advice was to buy a seat on the NYSE. After the 10th person she asked agreed to sponsor her membership — and after she convinced a bank to lend her much of the $445,000 she needed to buy the seat — she became the first woman to hold the seat in late 1967. She was named New York’s first female superintendent of banking in 1977.

Elinor Ostrom (1933-2012) was a child of the Great Depression and the war years who learned to grow vegetables and knit scarves for soldiers. She worked to pay her own way through college, and after graduation, when she looked for jobs, she was pegged as a candidate for the secretarial pool since she was a woman but advanced up the ladder. After a few years of work but wanting more, she earned her Ph.D. in economics, even though she was discouraged to do so. She became a college professor and turned her pursuit to the scholarly, later winning the Nobel Prize in Economic Sciences in 2009 for her analysis of economic governance. Time magazine named her one of the world’s 100 most influential people in 2012 before her death from cancer.

See Who: These Billionaires Got Richer During the Pandemic

Adena Friedman became the first woman to lead a global stock exchange when she was named chief executive officer of Nasdaq on Jan. 1, 2017. She joined Nasdaq as an intern in 1993 and rose through promotions, holding a number of key positions before leaving in 2011 to become a chief financial officer and managing director of The Carlyle Group, a private equity firm. She returned to Nasdaq in 2014 and served as president and chief operating officer before becoming the CEO. She has made it a goal as CEO to create more chances for women to succeed in the finance industry.

Mellody Hobson launched her career in finance as an intern at Chicago mutual fund and investment management firm Ariel Investments. Now, she is president and co-chief executive officer of Ariel, a minority-owned mutual fund firm. In 2017, she became the first Black woman to lead the Economic Club of Chicago, two years after Time magazine named her one of the 100 most influential people in the world. In March, she will become the non-executive chair of Starbucks. In 2019, she received the Woodrow Wilson Award from her alma mater, Princeton, for her commitment to national service.

New York Life Investment Management LLC has seen an increase in third-party assets of nearly threefold since Yie-Hsin Hung took over as its chief executive officer in 2015. She also is the senior vice president of New York Life, and she has served on the company’s executive management committee since January 2017. Hung is an advocate for helping women to become investors and takes part in events aimed at helping women to achieve their financial goals. On the job, her drive to create a diverse and inclusive culture in the workplace led to New York Life being named a top 10 workplace for multicultural women by Working Mother in 2019 and vaulted it to the No. 1 spot in Latina Style’s 50 Best Companies for Latinas during the same year.

On Jan. 26, Janet Yellen became the 78th treasury secretary of the United States — but she’s the first woman to hold the position. A native of Brooklyn, New York, she spent a lifetime preparing for the role, first as a highly regarded economics professor. She later was appointed chair of the White House Council of Economic Advisors by President Bill Clinton and chair of the Federal Reserve Board by President Barack Obama. When President Joe Biden tabbed her to lead the treasury, she became the first person — male or female — to do all three jobs.