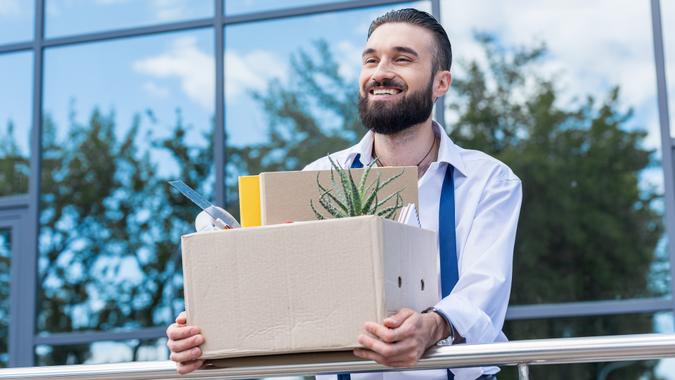 The Great Resignation is slowing down slightly but is far from over. The number of Americans who quit their jobs in December reached 4.3 million, a slight decrease from November’s high of 4.5 million, according to the Labor Department’s Job Openings and Labor Turnover Survey (JOLTS) report that came out on Feb. 1.

See: Gen Z vs. Boomer Job Seekers: What Each Generation Really Wants
Find: 14 Reasons You Didn’t Get a Call Back After a Job Interview

The quits rate was little changed at 2.9%, following November’s 3%, according to the Labor Department.

In addition, the number of job openings was little changed at 10.9 million in December, following 10.6 million job openings in November, reflecting the still-tight labor market, according to the data.

Ronni Zehavi, CEO of HR tech platform HiBob, told GOBankingRates that while quit rates are leveling, it doesn’t mean that companies can back off of programs focused on retention or recruitment, as modern employees expect their employers to think of them as people and respect them as individuals with personal lives.

“Whether it’s offering increased flexibility, strong compensation packages, or increased flexibility, meaningful benefits are critical to retention and recruitment,” Zehavi said. “And while perks can go a long way in terms of keeping people happy, companies must make sure they aren’t overcompensating with perks for unmanageable workloads.

Quits decreased in several industries, including health care and social assistance, accommodation and food services and construction, according to the report. In addition, the number of quits decreased in the South.

See: 15 Best Work-From-Home Jobs for Retirees
Find: 22 Side Gigs That Can Make You Richer Than a Full-Time Job

The largest quit rates were in accommodation and food services, with 6.1%; leisure and hospitality, with 5.8%;  retail trade, with 4.9%; and trade, transportation, and utilities, with 3.8%.