Delta Variant, Supply Chain Disruptions Slow Down US Economy in Q3, with 2% GDP 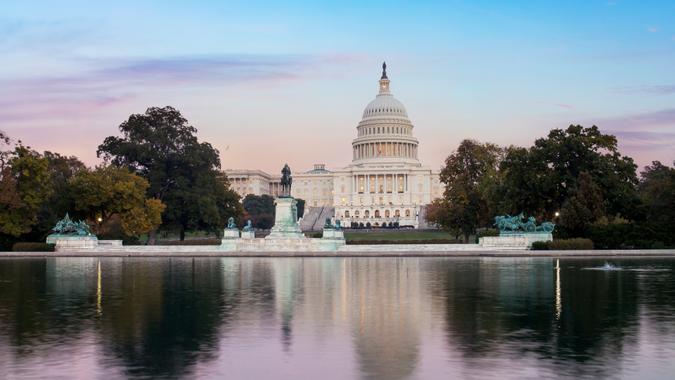 The U.S. Gross Domestic Product increased at an annual rate of 2% in the third quarter of 2021, lower than estimates and a disappointment from the second quarter’s 6.7% increase, according to the Department of Commerce today. This also represents the lowest rate for the year as the first quarter saw a 6.4% increase.

See: What Is the GDP — and What Do You Need To Know About It?
Find: Yellen Expects Inflation to Last About Another Year Amid Supply Chain Issues and Labor Shortages

“A resurgence of COVID-19 cases resulted in new restrictions and delays in the reopening of establishments in some parts of the country. Government assistance payments in the form of forgivable loans to businesses, grants to state and local governments, and social benefits to households all decreased,” according to the release. “The full economic effects of the COVID-19 pandemic cannot be quantified in the GDP estimate for the third quarter because the impacts are generally embedded in source data and cannot be separately identified.”

Danny Popescu, CEO of Harbourfront Wealth Management, tells GOBankingRates that Q3 displayed “a healthy push toward recovery, but against the backdrop of resurging case numbers and unexpected supply chain issues, this battle was a tough one to win.”

“Inflation also played its part in decreased consumer spending. Though a less-than-hoped-for rise in economic growth for this period, the economic outlook for Q4 isn’t completely hopeless,” Popescu adds.

The third-quarter figure was worse than Wall Street expected, as economists polled by FactSet predicted a 3.5% rate, according to Barron’s.

In a note sent to GObankingRates, Mike Englund at Action Economics says that the 2% U.S. Q3 GDP growth clip “exactly matched our estimate, though it fell short of most market forecasts, and likely undershot the GDP assumptions at the FOMC’s September meeting by a huge margin.”

“The components revealed greater than expected weakness in the non-residential and residential construction data, and surprisingly weak inventory data, but with less weakness than expected in net exports, and a small rise in government purchases. Consumption spending rose by 1.6%, which fell short of our assumptions but beat most market estimates. The component mix left a -0.1% Q3 contraction rate for final sales that was modestly weaker than assumed, and an inventory liquidation rate of a hefty -$77.7 bln. Weaker sales but super tight inventories implies offsetting risks for our 5.0% Q4 GDP forecast, though cascading supply chain disruptions leave downside Q4 risk on net,” Englund added in the note.

Last month, economists lowered their U.S. Gross Domestic Product forecast for 2021 and 2022, as well as economic growth as a whole, citing “a variant of the coronavirus against which the vaccines may be ineffective as the main downside risk,” as GOBankingRates previously reported.

The National Association for Business Economics (NABE) Outlook — which presents the consensus macroeconomic forecast of a panel of 47 professional forecasters — has become more tempered about 2021 as a whole. Its median real GDP growth estimate for 2021 is down sharply at 5.6%, compared to the 6.7% forecasted in the May 2021 survey.

“NABE Outlook survey panelists have moderated their expectations about the prospects for economic growth in 2021 since May,” said NABE President-elect David Altig, executive vice president and director of research, Federal Reserve Bank of Atlanta. “The median forecast calls for a 4.0% annualized growth rate in the third quarter of 2021 for inflation-adjusted gross domestic product, or real GDP.”