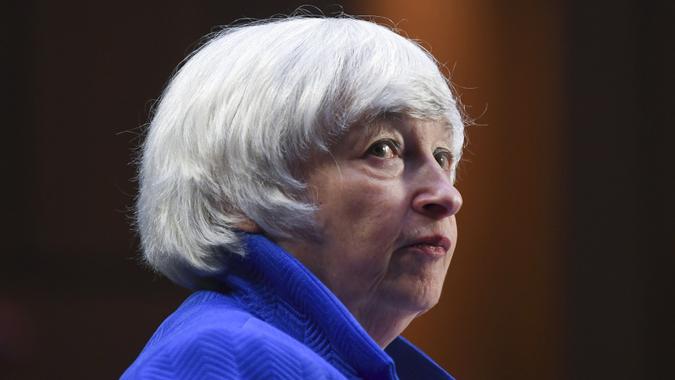 Treasury Secretary Janet Yellen said she doesn’t expect inflation levels to fall before the middle or the end of next year. Her remarks come amid increasing concerns about supply chain bottlenecks and a labor shortage.

See: Why Inflation’s 6% Cost-of-Living Increase to Social Security Could Be a Double-Edged Sword
Find: Biden’s Stimulus Stoking the Flames of Inflation — Are Long-Term Effects Possible?

“The Covid shock to the economy has caused disruptions that we’ll be working through over the next year. And, of course, Americans have not seen inflation like we have experienced recently in a long time,” Yellen said on CNN’s “State of the Union,” according to Politico. “As we get back to normal, expect that to end.”

Asked when she expects inflation — which was 5.4% at the end of September — to get back to the 2% range considered acceptable, Yellen said that it would be the middle-to-second half of 2022, according to CNN.

“Well, I expect that to happen next year. Monthly rates of inflation have already fallen substantially from the very high rates that we saw in the spring and early summer,” she said on “State of the Union.” “On a 12-month basis, the inflation rate will remain high into next year because of what’s already happened. But I expect improvement … by the middle to end of next year, second half of next year.”

Yellen also pushed back on former Clinton Treasury Secretary Larry Summer’s fears that the Biden administration is losing control over inflation, according to CNN.

“I think he’s wrong, I don’t think we’re about to lose control of inflation,” she said, although she agreed that the U.S. is going through a period of inflation that is higher than before, CNN reports. “It’s something that’s obviously a concern and worrying them, but we haven’t lost control.”

Earlier this month, the International Monetary Fund slashed its 2021 growth forecast for the U.S. by 0.1% percentage point compared to its July outlook, to 6%, citing rising inflation and supply disruptions, which pose “another policy challenge.”