Counterpoint: Why We Need To Keep the Economy Closed Until It’s Safe 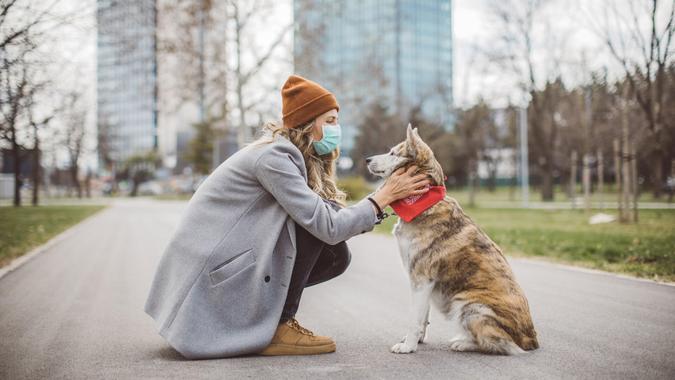 The virus is now in its second year, but it’s starting to look like the virus’ second year could be its last. Now, the question is whether to keep the economy closed until COVID-19 is resolved for sure or to finally open up in full once and for all. Although brighter skies appear to be on the horizon, GOBankingRates talked to several experts who insist that it would be premature to fully reopen now. Some believe it would invite another wave of infections, maybe this time from some of the scary new strains that are prowling for fresh hosts.

The Other Side: Experts Weigh In on Why It’s Important to Completely Open the Economy

The Time for This Discussion Was Around 12 Months Ago

From the outset, the United States seemed half committed to a shutdown, half committed to anti-virus health mandates — and fully committed to neither. The inconsistency and half-measures gave the country the worst of both worlds; America endured great economic hardship but didn’t shut down thoroughly enough to stamp out COVID-19.

“If we wanted to have prioritized public health, we probably should have taken the hard medicine of a full, restrictive lockdown for however many weeks,” said economic and financial analyst Chris Motola of MerchantMaverick.com. “That would have meant inconveniencing people and supporting them with regular direct payments for the duration of the lockdown.”

In the News: 8 Million Are Eligible for Stimulus but Haven’t Received It

That didn’t happen, so both the virus and the shutdown debate endure.

The Vaccines Are Promising and Plentiful, but They’re Not Magic

Several companies have developed, manufactured and distributed millions of doses of highly effective vaccines in record time. A miracle of science, the momentous effort is clearly paying off. But it’s far from over, and jumping the gun now would ruin everything, some experts say.

“Even though vaccination has begun, it is not safe to reopen the economy completely,” said John Marsano, financial advisor and CEO of Inheritance Advanced. “The risks of spreading the virus again are still high.”

Biden’s First Month vs. Trump’s: Here Are the Major Numbers To Know

More than 30 million Americans have been fully vaccinated and nearly double that number have received at least one dose, according to the CDC. That’s incredible progress, but those numbers mean that less than 10% of the population is fully vaccinated and fewer than 1 in 5 has received any vaccine at all. The end may finally be in sight, but it’s still fairly far off in the distance.

Weigh In: Do You Think the Minimum Wage Should Be $15? Take Our Poll

With the New Stimulus, Most of America Can Now Limp to the Finish Line

President Joe Biden landed a huge victory when his $1.9 trillion stimulus package passed through the Senate. It includes $1,400 payments for most Americans and their qualifying dependents and continued funding for an extra $300 a week in jobless benefits.

The help that was so badly needed is on the way. To a lot of experts, it just doesn’t make sense to throw in the towel now that the masses will soon have the resources to see it through to the end.

Did You Know: Companies That Let You Work From Anywhere

“There is no point in infecting the population again for little economic gains,” Marsano said. “It is better to partially open the economy and keep the vulnerable citizens inside. Only the businesses that have a difficult time operating online should be allowed to reopen and customers who have been vaccinated should be allowed to roam freely.”

Both in the U.S. and in countries across the world, governments opened their economies prematurely to predictably bad outcomes.

“Keeping the economy partially closed is important at the given time due to high health risks,” said KidVisionaries founder Kristi Stoll, a financial expert who focuses on crowdfunding. “It is often said that the pandemic is under control now, but we have seen that countries that lift restrictions start experiencing another wave of infections. A major increase in cases will hit the economy a second time. Opening the economy completely is not a wise option here.”