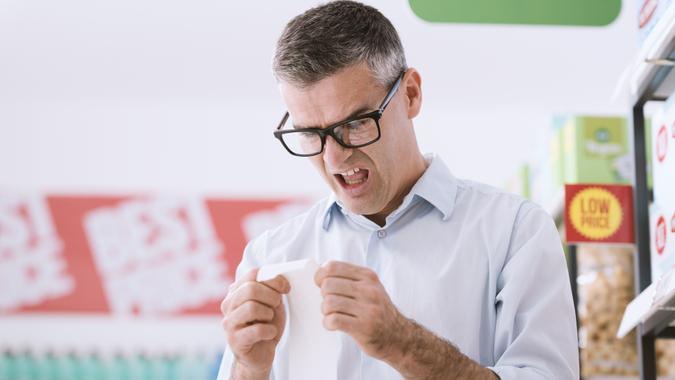 The Labor Department released its Consumer Price Index March 10 and the 12-month increase, which has been steadily rising, is the largest since the period ending January 1982.

See: Thanks to Inflation, 64% of Americans Now Live Paycheck to Paycheck
Find: How Much Is Inflation Actually Costing the Average Family Each Month?

Over the last 12 months, the all items index increased 7.9% before seasonal adjustment. Increases in the indexes for gasoline, shelter and food were the largest contributors to the seasonally adjusted all items increase.

The CPI, which measures what consumers pay for goods and services — including clothes, groceries, restaurant meals, recreational activities and vehicles — increased 0.8% in February on a seasonally adjusted basis after rising 0.6% in January.

John Catsimatidis, chairman and CEO of Red Apple Group — which owns and operates United Oil Refinery and 400 gas stations — as well as chairman and CEO of Gristedes & D’Agostino’s Supermarkets, told GOBankingRates: “If crude oil stays at approximately $120 a barrel, the price increases in March at both the gas pump and the supermarkets will be tremendous.”

“The 7.9% figure from today’s CPI is lighter than it actually is, in my opinion. I think that it is at least another half-point to a point higher, because the price increases that are being shown at the pump and in the supermarkets are lagging behind,” he said. “It will cost the American consumer more.”

The shelter index was by far the biggest factor in the increase, with a broad set of indexes also contributing — including those for recreation, household furnishings and and operations, motor vehicle insurance, personal care, and airline fares.

See: Stagflation: Is It Here or Are Fears Unfounded?
Find: The 15 Best Things To Buy With SNAP at Costco

Jay Hatfield, CEO at Infrastructure Capital Management, told GOBankingRates that the CPI printed in line with expectations — led by food up 1% for the month, energy up 3.5% and airline travel up 5.2%.