Lumber is Down a Whopping 40%, and Still At Historic Highs – An Expert Weighs In 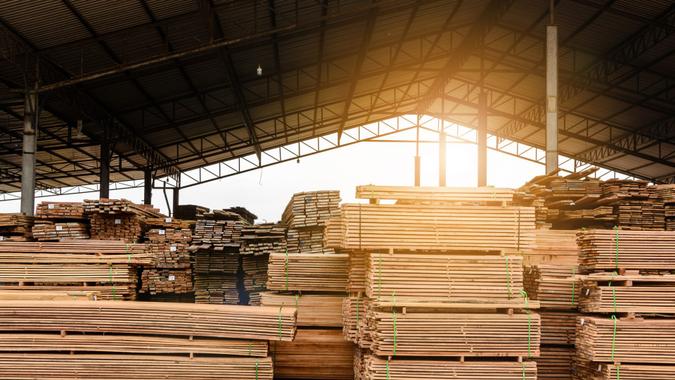 Lumber has been having quite the moment as of late. The ordinarily quiet commodity market has been the center of attention since a booming housing market and supply strain disruptions lead to an almost 112% price surge never before seen in the history of the material’s trading. Tight supply, ongoing COVID-19 restrictions, and unrelenting demand have acted as the main driving forces behind an unprecedented rise in prices.

See: Most and Least Expensive States to Build a Home
Find: 10 Supply Shortages That May Happen Again This Year

Last month, lumber prices finally started to show signs of reprieve. Lumber futures sank more than 40% in June alone, the largest drop on record for the commodity since the ’70s. Overall, the number is down more than 18% in 2021 and headed for the first negative first half since 2015.

Despite this, lumber is almost double the 30-year average. Third-generation owner and sales director of Sherwood Lumber, Michael Goodman spoke exclusively with GoBankingRates about what’s causing the swings and where he foresees prices going in the coming months.

Many have speculated that Americans going on vacations instead of taking on more home projects has significantly contributed to the decrease in lumber prices. “Everyone at home was spending a lot of money, and that DIY business has significantly peeled off. Everyone who was home was redoing their backyard or adding structures and now they’re spending money on other things. They’re using their money maybe for savings, maybe for vacations, just may be back to normal stuff – wherever that money was going to prior to the pandemic. They’re not stuck at home anymore and that money is not allocated towards that,” said Goodman.

He added that big, professional builders were also scrambling to finish their jobs due to the high demand, and were willing to pay well above market price last year in order to fulfill orders. In tandem with home DIY projects tapering off, professional builders are also slowly completing last year’s backlog resulting in not as much need, thus driving prices back down.

Discover: Building a House: Where You Should and Shouldn’t Cut Costs
Read More: Most and Least Expensive States to Build a Home

Although prices have come off from historic highs, they are still high and Goodman expects them to stay that way for at least the next six months, going as far as a year and a half. When asked why he felt demand will remain high for lumber he responded. “It’s really from our anecdotal conversations from our dealers that we sell to and our builders that we speak to. There’s just a lot of pent-up demand, and a lot of jobs on the books…We see a lot of demand out there that still needs to be built, and it’s at least a year and a half of building.”

He added that until our current supply system can catch up to demand, prices will be sustained at current levels.

The flurry of activity that drove price increases has tapered off, but supply-side issues still remain an issue. Although more lumber mills have started to come online and supply is starting to catch up to demand, employment issues spurred by COVID-19 have now come into the fold to further create difficulties in supplying customers with the lumber they need.

“A lot of the truckers are taking their unemployment and not working right now, so as that comes to an end, there will be more drivers,” Goodman stated, referencing a tight transportation supply chain that is still making delivering lumber to meet demand difficult, and keeping the prices temporarily inflated. He also stated that during COVID-19, many of the driving schools that train truckers to transport these kinds of long-haul items were shut down, so as that changes, hopefully so do the supply routes.

Goodman also noted that a  lot of the trucking in lumber is done by third-party truckers. This means that the lumber price can be influenced by forces out of the control of market movers within the lumber industry. Even if supply was at 100%, if employment issues were still at large as they are now, this would still influence prices.

Employment: 25 Tried-and-True Jobs That Will Last Through Any Recession

“They are able to demand more money, which drives the price of the good they are able to deliver. As trucking gets looser, prices will likely adjust as well,” he stated. The issue of workers accepting unemployment and not returning to work as they demand higher wages is an issue affecting sectors throughout the economy, most famously the fast-food industry and now lumber as well.

While a tight trucking industry is affecting prices somewhat, Goodman stresses that supply is still very much at the forefront of high prices.

“Our current supply system can’t supply our current demand,” he added. “Until the supply chain issues with trucking and rail systems all get sorted out, which they are, slowly…you’ll start to see a tapering.”