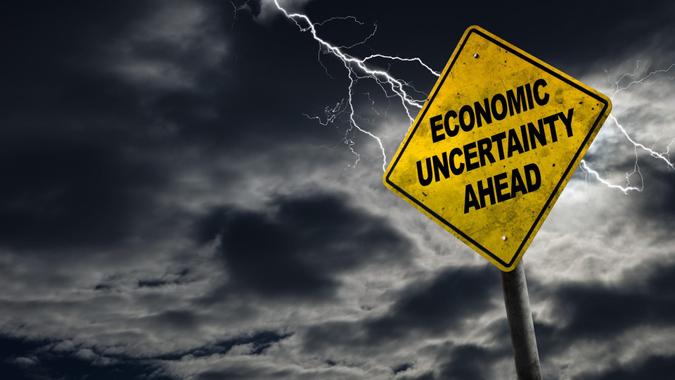 Recession is a burning hot topic right now, but the conversation around it is rather chaotic. Like so many issues, the state of our economy has become a partisan debate, with Republican officials arguing that we’ve been plunged into a recession (with the blame falling on President Biden), while Democrat officeholders by and large insisting that we’re in a bumpy period economically, but not in a recession.

See Our List: 100 Most Influential Money Experts
Read: 7 Things You Should Never Do When Planning For Retirement

Signs That We Are in a Recession

“Over the past 3 months there has been a notable increase in announcements of layoffs and hiring freezes,” said David Peterson, co-founder of Bankdash.com.  “Not only is a rise in the unemployment rate a key characteristic of a recession but also, companies tend to have a great sense of where the economy is headed and so their actions are a great indicator for the broader economy. The widespread nature of the layoffs and hiring freezes is a clear sign that companies are concerned about an imminent economic slowdown. Companies announcing layoffs include Tesla, Netflix, Ford, Shopify, Carvana, Oracle and Coinbase. Companies announcing hiring freezes include JPMorgan Chase, Google, Intel and Facebook.”

The Cost of Copper is Falling

“After falling by more than 11% in only two weeks, the metal’s prices hit 16-month lows, which is terrible news for investors who consider copper prices a leading indicator of the state of the world economy,” said Levon Galstyan, a CPA at Oak View Law Group. “Because of its widespread usage in construction materials, copper is in more demand as the economy grows. When the economy shrinks, that demand diminishes. When Russia invaded Ukraine earlier this year, which produces  [3.5%] of the world’s copper, prices skyrocketed. Traders started stockpiling the metal because they were worried about a shortage.”

Gas Prices Have Been Rising

“According to data from the US Energy Information Administration (EIA), the average gas price in April 2021 was $2.958,” said Galstyan. “When April 2022 rolled along, it soared to [$4.213].  The most current monthly figure is even more extraordinary: [$4.668]. To provide some context, the most considerable price rise before the most recent hike occurred in July 2008, when prices hit $4.062.”

“After a red-hot period of stellar real estate and auto sales, we are now beginning to see these two areas fall,” said Evan Melchiorre, CFP, co-founder and managing partner at Tenet Wealth Partners. “Pending home sales fell 20% in June versus last year, which is also came in at a two-year low.  Auto sales also fell about 6% in July compared with a year earlier.  General Motors, one of the largest car producers, reported that their second-quarter sales dropped about 15% as well.”

Signs That We Are NOT in a Recession:

The GDP fell this year, but did it fall substantially enough to herald a recession? Perhaps not.

“GDP contracted a very small amount in the first two quarters of the year: Given that the contraction for the first quarter was just 1.6% and that for the second quarter was 0.9%, this might still be too mild to be considered a recession,” said Richard Barrington, a financial analyst with Credit Sesame. “This is especially true given that those are annualized rates of contraction, after adjustment for inflation. For example, an annualized 0.9% rate of contraction meant that the economy actually shrunk by just 0.23% during the second quarter. With such a slight decline and given that measuring inflation is not an exact science, a 0.23% inflation-adjusted decline in GDP may not be enough to trigger an official declaration that this is a recession.”

“Chase Bank and Bank of America both released data points last week indicating continued strong consumer spending through the summer months,” Peterson said. “Chase Bank CEO Jamie Dimon shared that his customers were overall spending 10% more in 2022 compared to 2021. Similarly, Bank of America CEO Brian Moynihan shared that his customers remained resilient with spending up 11% in June 2022 compared to 2021 and noted that this trend was continuing into July. These are consistent data points from two of the largest banks in the United States suggesting continued strong consumer spending. As a reminder, consumer spending represents 70% of U.S. GDP and therefore the continued strength is a sign that we’re not in a recession.”

“Coming out of the COVID-19 recovery, corporations and consumers have generally maintained a healthy balance sheet of cash and savings,” said Melchiorre. “This has seemingly helped stem the tide of high inflation to this point.  In addition to consumer spending and jobs remaining fairly strong, we have seen resilient earnings from some of the largest U.S.-based companies; in fact, of the 56% of S&P 500 companies that have reported second-quarter earnings results thus far, more than half of them have beaten expectations, which is above the long-term average of 47 percent.  In addition to that, large companies such as Amazon, Microsoft, and Apple also issued strong guidance and outlooks for the remainder of the year.”

The Labor Market is Strong

Companies may be implementing hiring freezes, but that seems to be more in anticipation of recession than in response to one, as the labor market is just too strong to suggest recession.

“Recessions are described as a dramatic drop in economic activity that affects the whole economy,” said Galstyan. “Additionally, they frequently pay close attention to the labor market. And what’s interesting right now is how robust the labor market is still. With 3.6%, the jobless rate is the lowest it has been in years. In recent months, the U.S. has been increasing employment by 400,000 monthly. For every individual who is unemployed and seeking jobs, there are also two open positions listed; therefore, it doesn’t seem like a recession is now underway.”