What Does the President Do in the First Month in Office That Impacts Your Wallet? 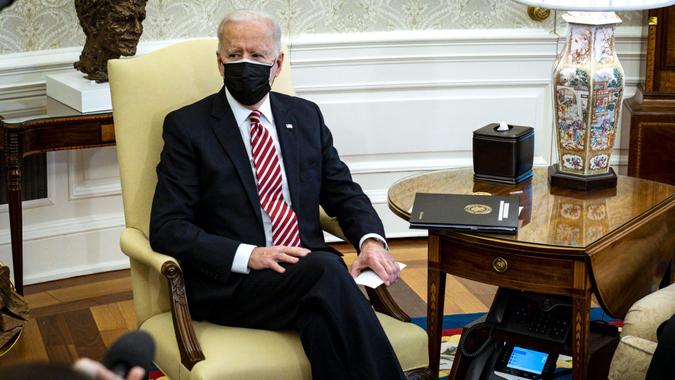 Traditionally, a U.S. president’s first evaluation happens after three months, with an informal review of his first 100 days in office. Though still early, this initial trimester, if you will, says a lot about a new president’s plans and abilities to execute them. But there’s also quite a bit of action that occurs in the first month of a presidential term.

Read: Biden Wants to Shut Down Credit Bureaus – What Would That Mean for You?

Back in the ’90s, then-president Bill Clinton chose First Lady Hillary Rodham Clinton to lead the Task Force on National Health Care Reform. He also signed off on the Family Medical Leave Act that mandates companies to provide employees with up to three months of unpaid leave for family and medical emergencies. When former President Barack Obama was inaugurated, he immediately began work on a major economic stimulus package (we were in the throes of the Great Recession at the time) and signed an executive order to shut down the Guantánamo Bay detention facility. In his first 30 days, President Donald Trump signed off on a five-year ban on White House and congressional officials becoming lobbyists after they exit government service and rolled back a slew of regulations.

In his first month, President Joe Biden has done a fair amount of work, too. His job isn’t an easy one — he’s got his hands full with a pandemic that is still wreaking havoc on the nation and an economic fallout that makes the Great Recession look like a cakewalk for many Americans. What has he done so far, what more can we expect of him in these early days and how do his actions affect your wallet? We talked to experts to find out.

See: Never Got Your Stimulus Check? Claim It on Your Taxes

1. He Launched a Government-Wide Effort To Provide Emergency Funding

“In America today, [our] situation is reminiscent of the time between the election of Franklin Delano Roosevelt,” said William S. Bike, a political consultant and author of “Winning Political Campaigns.“ “In 1932 and his taking office in 1933, those months saw the worst depths of the Great Depression, as both outgoing President Herbert Hoover and incoming President FDR had no power to do anything, and conditions spiraled downward.”

But Biden is doing his part to prevent more spiraling.

“On Jan. 22, only two days after taking office, Biden issued an executive order launching a government-wide effort to provide emergency economic help to people who have lost jobs and who are struggling to feed their families,” Bike said. “The U.S. Department of Agriculture will expand and extend federal nutrition assistance programs; the Department of the Treasury will speed up financial assistance to those eligible; the U.S. Department of Veterans Affairs is pausing federal collections on debts; the U.S. Department of Labor is allowing employees who refuse to work in unsafe conditions to receive unemployment insurance; and the government’s establishing an interagency benefit coordination structure to get benefits to those eligible quicker and more accurately.”

“President Biden’s first month in office has already impacted the financial lives of Americans,” said Lauren Silbert, vice president and general manager of The Balance. “Moratoriums on foreclosures have been extended through the end of March, and if a homeowner is already enrolled in a forbearance program, they’re able to apply for an additional three-month extension.“

Read: The 6 Most Important Tax Deductions You Need to Claim

Silbert noted that this extension should bring relief to around 600,000 homeowners.

“In the short term, President Biden’s plan to improve the economy revolves around getting the COVID-19 pandemic under control,” said Michael Bonebright, consumer analyst with DealNews.com. “Because the Senate approved new spending via budget reconciliation, Biden should be able to sign the proposed $1.9 trillion American Rescue Plan into law within the next few weeks, after it’s approved by the House and Senate. The details of this plan are still being ironed out, but we know the administration wants it to include a third round of stimulus checks, [etc.]. While direct payments will certainly put a little more money into the pockets of consumers, the biggest way Biden could improve the financial status of Americans is by aggressively stepping up the rollout of vaccines. Until we’ve reached herd immunity, consumer confidence will continue to be low because so many people are dealing with unemployment, a lack of job security, a lack of childcare and the threat of coronavirus-related medical debt.”

See: National Debt and Deficit — What Is It and How Does It Affect Me?

“Under the American Rescue Plan, federal unemployment benefits [will be] increased from $300 to $400,” said Michael Garbade, founder of Ledu Education Ecosystem and part of the community project National Coronavirus Hotline (NCH). “Moreover, the rescue plan further trickles down into two more unemployment programs: the Pandemic Emergency Unemployment Compensation program and the Pandemic Unemployment Assistance program, respectively. The PEUC program is there to support those citizens who have completely exhausted their regular state jobless payments [while] the PUA program has been put into place to support and provide benefits to self-employed citizens. These people can be gig workers, independent contractors or anyone else as well.”

“Biden has proposed a few tax credit changes that, if accepted, can directly impact your finances,” said Adam Garcia, financial consultant and CEO of The Stock Dork.”The new law could raise the child tax credit to $3,000 for children aged 6 to 17, whereas for children under 6, it could be raised to $3,600. These tax credits will be fully refundable. The income tax credit for maximum earnings could also be increased to $1,500 for childless adults and the upper age limit could also be raised to include old age workers. This law would also increase the income limit for the credit to $21,000.”

“New leadership in place at the Consumer Financial Protection Bureau means a renewed focus on consumer protections,” Silbert said. “An investigation into Venmo’s debt collection process was already announced on the back of increased complaints, and investigations into payday lenders seem to be on the horizon. We’re still looking forward to several big moves, like raising taxes on those who make more than $400,000/year, free college tuition for those who qualify and an increase to Social Security benefits.”