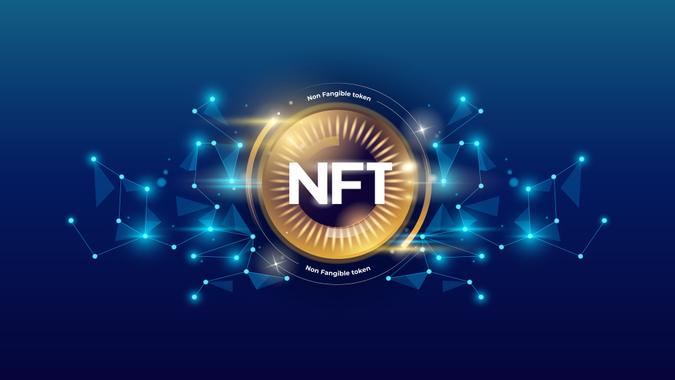 NFTs are continuing their incredible rise in both popularity and interest, and now, there is a somewhat new use case and in turn, a new way to earn income from the non-fungible tokens: staking.

But what is staking exactly?

NFT staking is a new way to earn passive income in the crypto world and lets NFT holders lock their assets in DeFi platforms to receive rewards, all without the need to sell their NFT collections, Binance explains.

Halsey Minor, founder of NFT publishing platform Vivid Labs, told GOBankingRates that with staking, holders can essentially lock up their NFTs on a given blockchain for a period of time and earn rewards for doing it in the form of regular payments of a certain token that can be accumulated or sold on exchanges. The primary function of staking, Minor said, is to incentivize proof-of-stake blockchains — that is, by serving as rewards for those who validate transactions on blockchains in an accurate and timely manner.

“Ultimately, what’s important about NFT staking right now is that it highlights how all sorts of new value is being created for users,” Minor said. “As NFTs continue to grow in popularity, we’re going to see more and more ways to monetize them. Staking will become easier, and mainstream NFT usage will mean mainstream ways to make money off of them. Maybe someday people will even pay to use Bored Ape’s in a Super Bowl commercial.”

Heidi Gold, Vice President of Product Management at global crypto exchange Bittrex, added that there is a growing number of variations of this system that are being innovated and deployed at an astonishingly fast pace.

“Without getting into the weeds of how staking works, it’s a critical component that essentially ensures that blockchains operate smoothly – and honestly, in terms of processing accurate and timely on-chain transactions — by creating incentives that get people paid,” Gold said, adding that when it comes to NFTs, there is potentially far more utility for the end-user than when compared to “traditional” staking.

“This is because staking an NFT could be made available on a huge number of blockchain-based platforms, including video games,” she said.

The same concept could be applied to social — or community — tokens that are launched by movie stars, for example as these community tokens are theoretically poised to help fans engage with their favorite celebrities more directly and with more incentives involved.

“These incentives could be even more valuable if these kinds of fan tokens are released as NFTs – because by doing this, you could use those NFTs as pieces of unique art while also equipping them with the option of staking in return for some form of crypto rewards,” Gold said. “The permutations of these use cases are boundless. And although it’s still early days, we are all excited to see where this space is headed!”

And this comes against the backdrop that 2022 is off to a very strong start for NFTs, with January sales reaching a record high of $6.13 billion, according to The Block Data Dashboard. While the crypto market at large is struggling, the NFT space — nascent in comparison — is faring very well following 2021’s global market value hitting $23 billion, according to blockchain analytics firm DappRadar and the term having even been named Collins’ Word of the Year 2021.

Amos Whitewolf, co-founder of decentralized autonomous organization Perion, told GOBankingRates that NFTs have quickly become one of the most popular — if not the most popular,  new entrants — forms of the crypto-asset world and there’s almost boundless potential when it comes to incorporating all kinds of utility into NFTs.

“Now imagine all those various NFT use cases and then, in each of them, tack onto them the option of using them for staking. This means, theoretically, that your NFT can be used as unique art or proof of ownership of a whole range of items — and then on top of this you can earn passive income through staking these associated NFTs,” he said.

Whitewolf explained that for example, you could choose to stake your sports membership for five years, showing your loyalty to the club and in return that club may choose to reward you with revenue from ticket sales, better seating on your tickets, or more merchandise sent to your door.

“Everyone talks about the financialization of everything as being some horrible thing, but honestly why wouldn’t you want to get passive income on all kinds of different assets that, in the past, offered relatively little?” he said.

“This is where we are going. And if you look at how staking has already shaped up to be a massive facet of the crypto world — particularly in decentralized finance — it only makes sense that NFTs will also play a hugely important role here. Indeed, it will be a great way for people around the world to better sustain themselves.”