Although most of us are still sleeping at 4 a.m., Apple CEO Tim Cook is already into his morning routine by then.

The head of the trillion-dollar company told “Axios on HBO” that he usually wakes up before 4 a.m. each day, and starts off his very early morning by reading emails and comments from Apple users.

“I like to take the first hour and go through user comments and things like that, and sort of focus on the external people that are so important to us,” he said. He probably doesn’t get through all his emails because, as ABC News previously reported, Cook receives between 700 and 800 emails from customers each day.

And around 5 a.m. he’ll get in a workout. “Then I go to the gym and work out for an hour because it keeps my stress at bay,” Cook said.

Cook has described himself as a “fitness nut,” and typically logs 50 minutes of daily exercise on his Apple Watch, according to a Fortune profile.

After that, he’ll head to Starbucks and check more emails before heading into work for the day, Time reported.

Cook isn’t the only super successful person who wakes up before the sun: Oprah Winfrey starts her day around 6 a.m. with a walk with her dogs, Jennifer Aniston wakes up at 4:30 a.m. when she’s working, and Richard Branson wakes up around 5 a.m. and kicks off his day with tennis or another form of exercise.

Click through to read more about some of the richest LGBTQ executives. 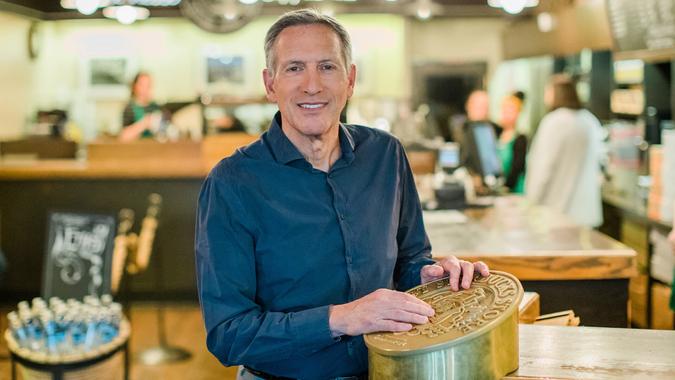 How Much Is Howard Schultz Worth? A Look at His Finances as He Mulls

The former Starbucks CEO could make a run for the White House.

> Net Worth > Business People > Tim Cook Reveals What He Does at 4 a.m. Every Day -- It Has Nothing to Do With Sleep