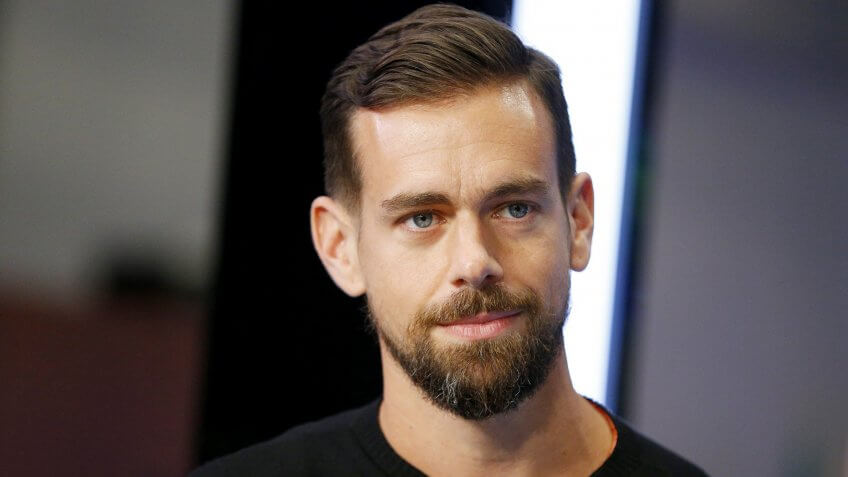 CEO compensation is off the charts at many companies, but some leaders earn significantly more than others. More than just an annual salary, executive compensation often involves stock awards, non-equity incentive plan pay and other financial rewards that really add up.

From Tim Cook and Satya Nadella to Mark Zuckerberg and Jack Dorsey, take this quiz to find out which CEOs are raking in the highest salaries, with net worth information provided by CelebrityNetWorth, unless indicated otherwise. 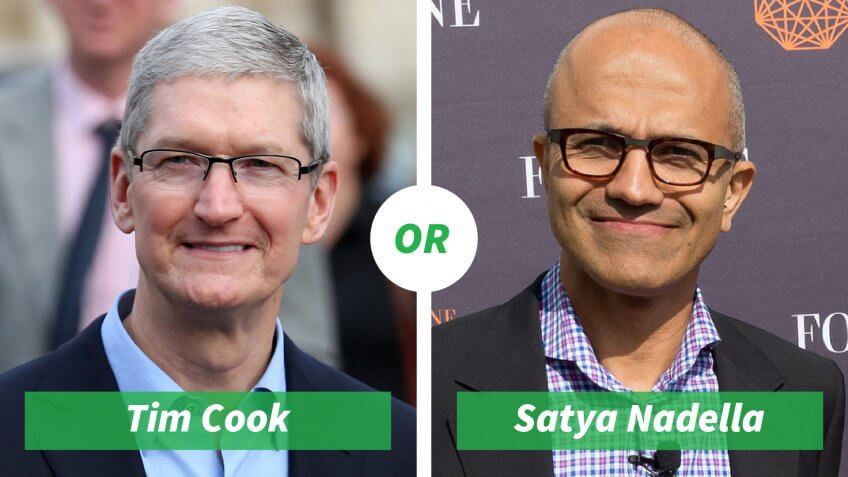 When famed Apple co-founder Steve Jobs stepped down as CEO in August 2011, Cook took the reins. He joined the tech company in 1998, and held several positions in the company, including chief operating officer, before becoming chairman and CEO.

Satya Nadella was named CEO of Microsoft in February 2014. He’s been with the company since 1992, and previously held leadership roles in its enterprise and consumer businesses. 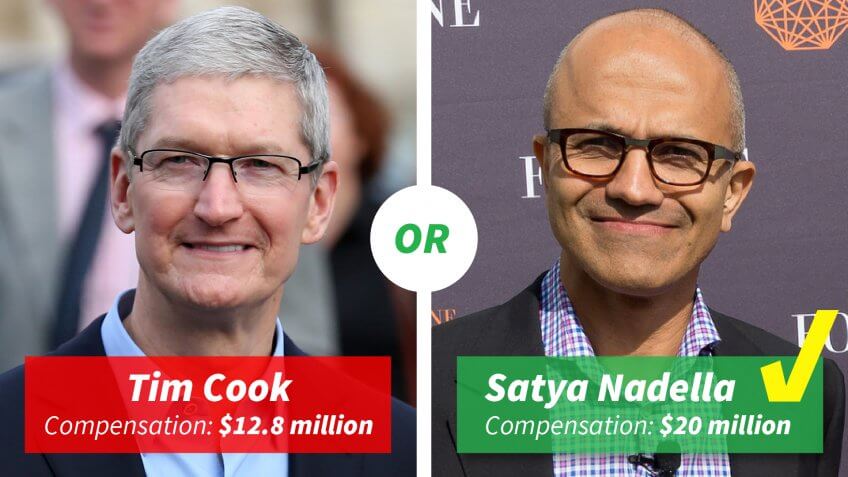 Satya Nadella’s $20 million payday included a $1.5 million salary, $11.4 million in stock awards, $7 million in non-equity incentive plan compensation and $97,189 in all other compensation in fiscal year 2017, according to Microsoft’s 2017 proxy statement. His total net worth is $45 million. He’s also an influencer worth following on LinkedIn.

Still impressive, Cook’s $12.8 million fiscal year 2017 CEO compensation included a $3.1 million salary, $9.3 million in non-equity incentive plan compensation and $440,374 in all other compensation, according to the company’s 2018 proxy filing. Nadella earned a higher salary in 2017, but Cook’s $800 million net worth, according to Forbes, as of February 2018, still puts him on top. 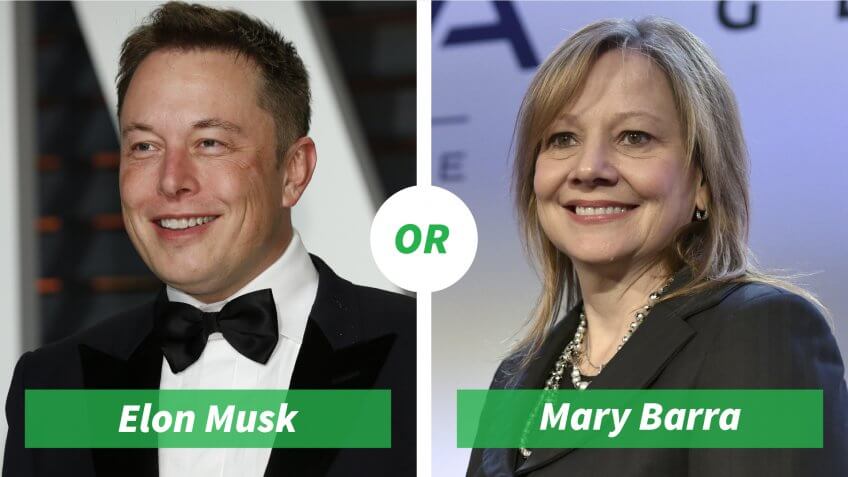 Mary Barra has served as chairman and CEO of General Motors Company since January 2014. The Stanford Graduate School of Business alum joined the company in 1980. GM has consistently been a good stock to buy.

Serial entrepreneur Elon Musk serves as chairman, product architect and CEO of Tesla — the latter of which he’s held since 2008. He’s also CEO and CTO of aerospace company SpaceX and chairman of SolarCity, a solar energy services company. 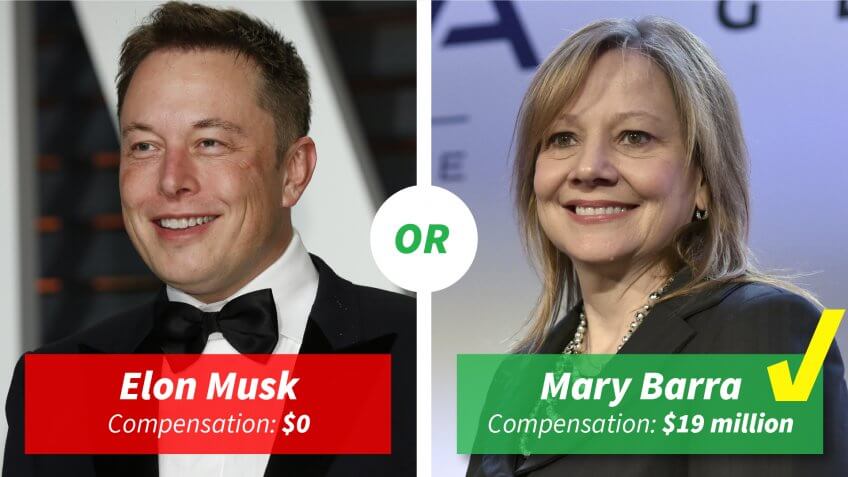 Barra was slated to earn $19 million in 2016, according to the company’s 2017 proxy statement. This includes a base salary of $2 million, $4 million short-term incentive plan, $9.8 million in performance share unites and $3.3 million in restricted stock units. Barra’s total net worth information isn’t publicly available.

Considering Elon Musk has a net worth of $21.5 billion, as of February 2018, according to Forbes, you’d think his executive compensation would be pretty high. Instead, you make more money than this entrepreneur. Surprisingly, the Tesla CEO earned nothing for leading the company in 2017, according to its 2018 proxy statement. Musk owns more than 4.2 million shares of the electric automaker, which likely helps keep him inspired. 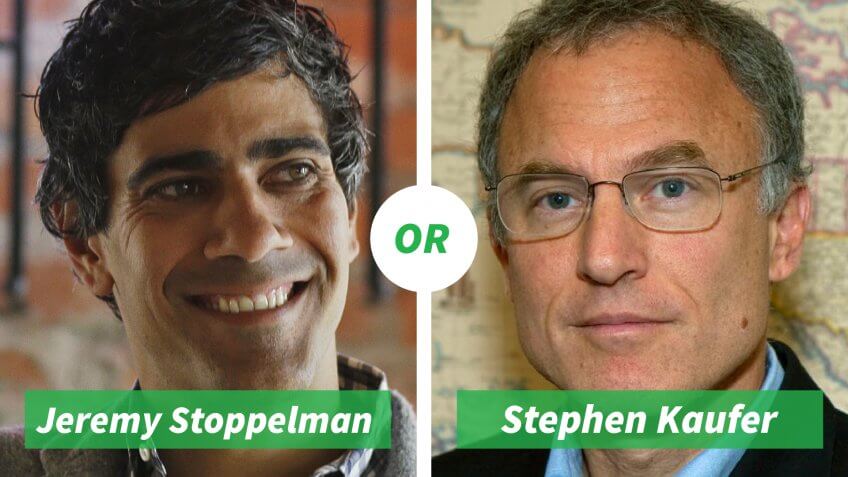 Stephen Kaufer co-founded TripAdvisor in 2000, and has served as the president and CEO of the travel company ever since. Yelp CEO and co-founder Jeremy Stoppleman launched his rival company, which crowdsources user reviews of local businesses, in 2004. 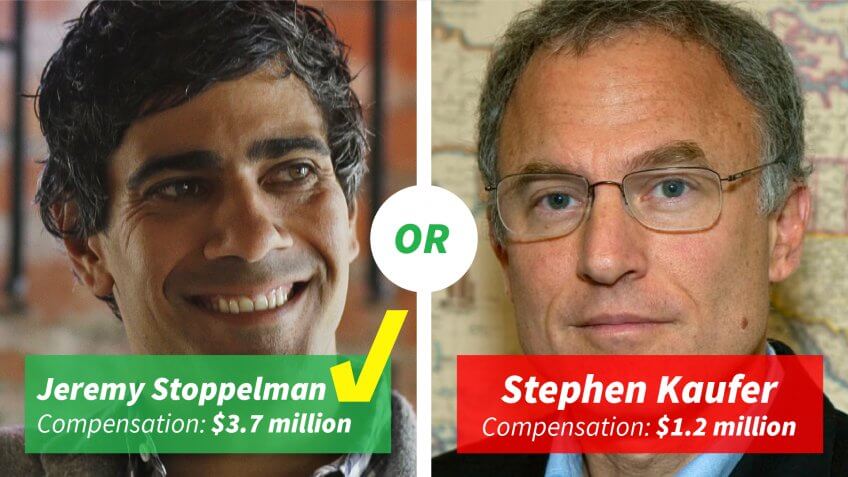 Technically, Stoppelman’s salary is just $1, but his total CEO compensation package reached $3.7 million in fiscal year 2016, according to Bloomberg. 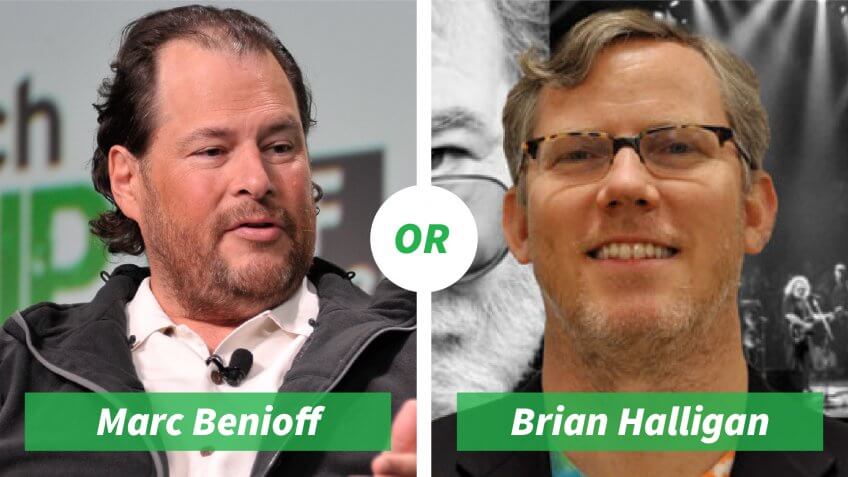 In 1999, Marc Benioff founded Salesforce, and he currently serves as chairman and CEO of the enterprise software company. Brian Halligan co-founded marketing and sales platform HubSpot in 2006, and has worked as the company’s CEO since then. 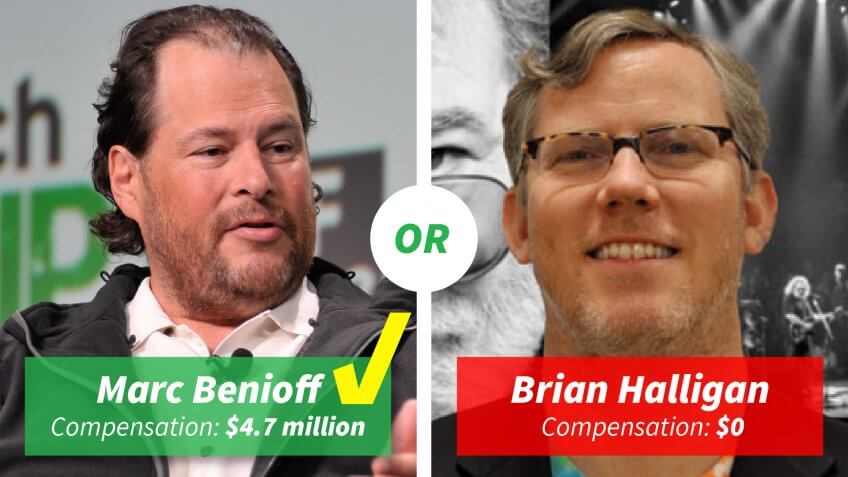 In Fiscal Year 2017, Benioff earned a base salary of nearly $1.6 million and a $3.1 million bonus, according to the company’s 2017 proxy statement. Earning a premium as the Salesforce chairman and CEO has allowed him to amass a net worth of $5.3 billion, as of February 2018, reported Forbes. Benioff is a CEO who earns his high-priced salary.

Halligan’s 2017 CEO compensation was much different, considering he opted not to collect a salary or cash bonus, according to the company’s 2017 proxy statement. Net worth information for Halligan is not publicly available. 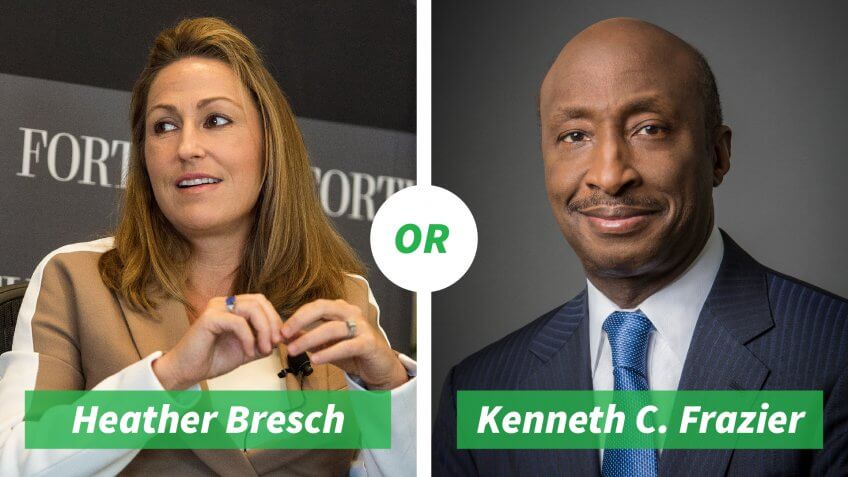 She joined Mylan as a data entry clerk in 1992, and Heather Bresch worked her way to the top. In 2012, she became the first female CEO of a Fortune 500 company in pharmaceutical industry.

Kenneth C. Frazier, Merck & Co., Inc. chairman and CEO, also joined his pharmaceutical company in 1992. He was appointed to his current job in 2011. 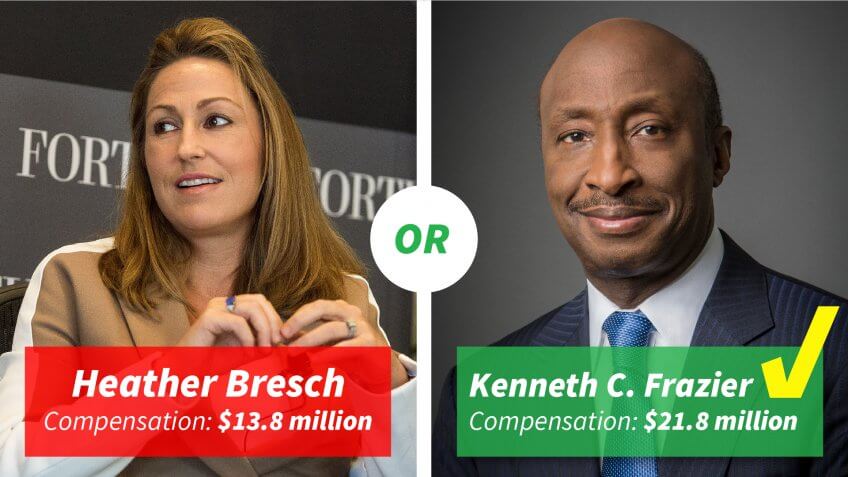 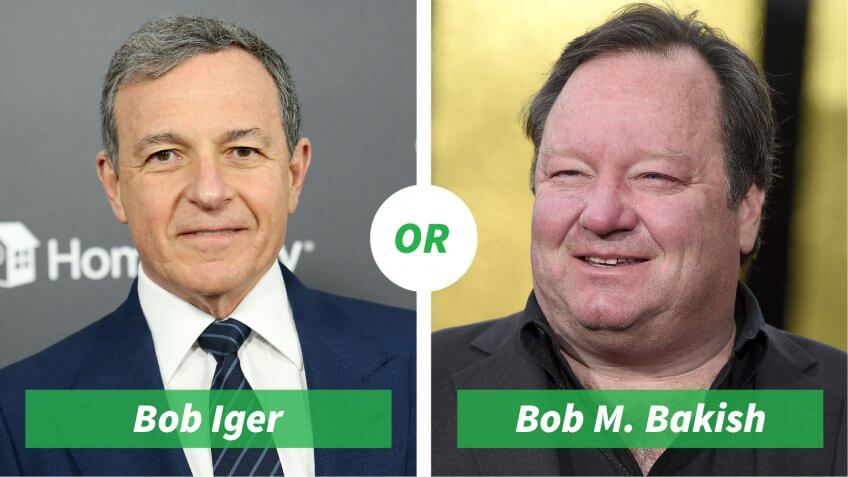 Bob Iger has been CEO of The Walt Disney Company since 2005. He has a big job, as the entertainment company is composed of several divisions, including media networks, parks and resorts, studio entertainment, consumer products and interactive media. He started his career in an entry-level position as a studio facility supervisor and worked his way up the ranks.

Viacom Inc., President and CEO Bob Bakish was appointed to his current role in 2007. He oversees the media conglomerates many brands, including Comedy Central, MTV, Nickelodeon, BET and Paramount Pictures. 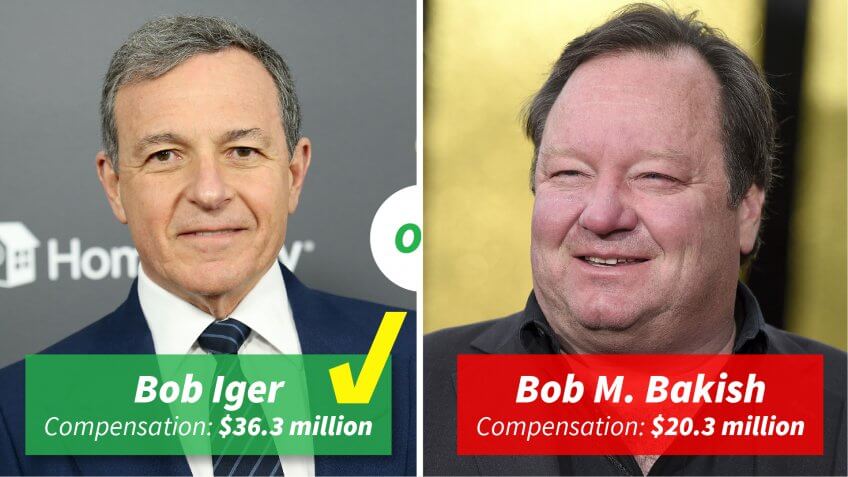 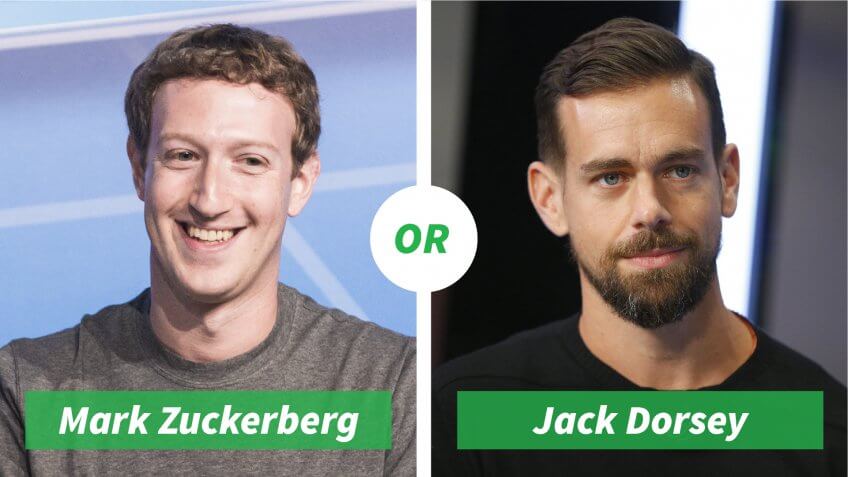 Mark Zuckerberg dropped out of Harvard University in 2004 to co-found Facebook. He’s been the company’s CEO ever since.

Jack Dorsey co-founded Twitter in 2006 and was the company’s CEO until 2008, but returned to the helm in June 2015. During his time off, he co-founded payments company Square, and still serves as its CEO.

Both Zuckerberg and Dorsey are college dropouts, but they still have great career advice to share. 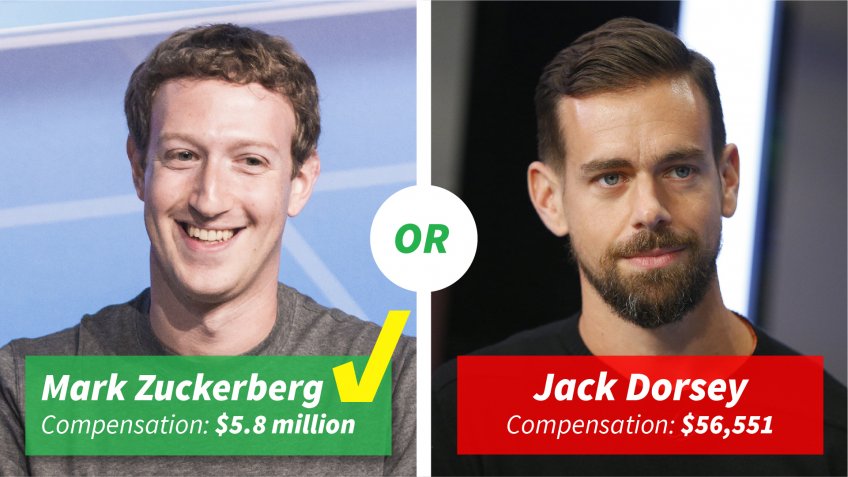 Definitely not one of the top CEO salaries, Zuckerberg collects an annual paycheck of just $1. However, his total compensation package for 2016 also included $5.8 million in other compensation, according to Facebook’s 2017 proxy statement. Considering the Facebook chairman and CEO has a net worth of $71.5 billion, according to Forbes, as of February 2018, he can afford to live on his $1 per year earnings.

Dorsey didn’t take a salary in 2016, and earned just $56,551 in other compensation, according to the company’s 2017 proxy statement. The Twitter chairman and CEO’s net worth is $3.5 billion, according to Forbes, as of February 2018, so he’s not exactly hurting for cash. 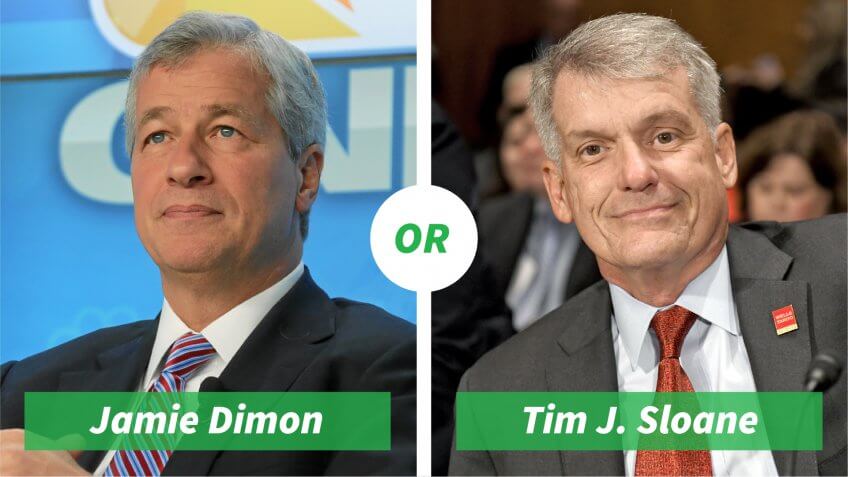 Jamie Dimon has been CEO of JPMorgan Chase & Co. since 2005 and chairman of the board since 2006. He worked for Bank One Corporation when the financial institution was acquired by JPMorgan Chase, and served as president and COO before his promotion. 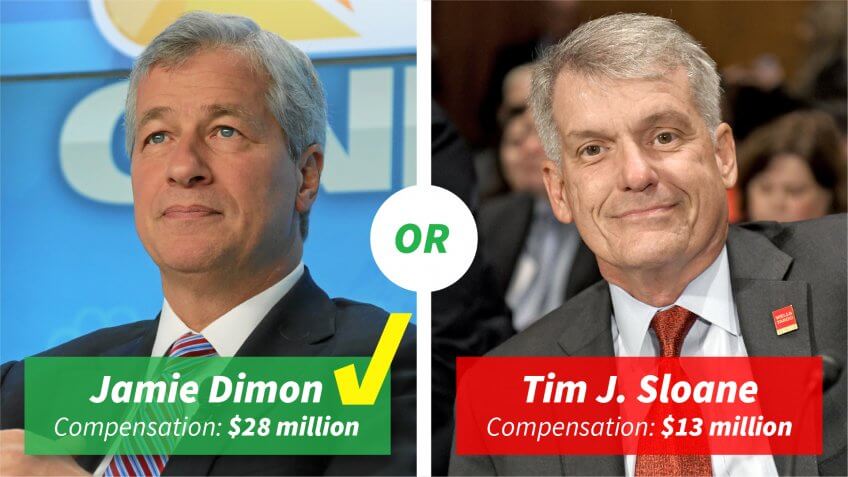 In 2016, Dimon’s $28 million executive compensation package consisted of a $1.5 million salary, $5 million bonus and $21.5 million performance stock units, according to JPMorgan Chase’s 2017 proxy filing. Forbes estimates his net worth at $1.3 billion, as of February 2018.

Considering he was only the president and CEO of Wells Fargo for a few months in 2016, Sloane’s compensation package was quite impressive. He earned a $2.4 million salary, $10.5 million in stock awards, a $166,624 change in pension value and non-qualified deferred compensation earnings and $18,550 in other compensation, according to the company’s 2017 proxy statement. Net worth information for Sloane is not available.

Read More: Everything You Need to Know About the Wells Fargo Account Scandal 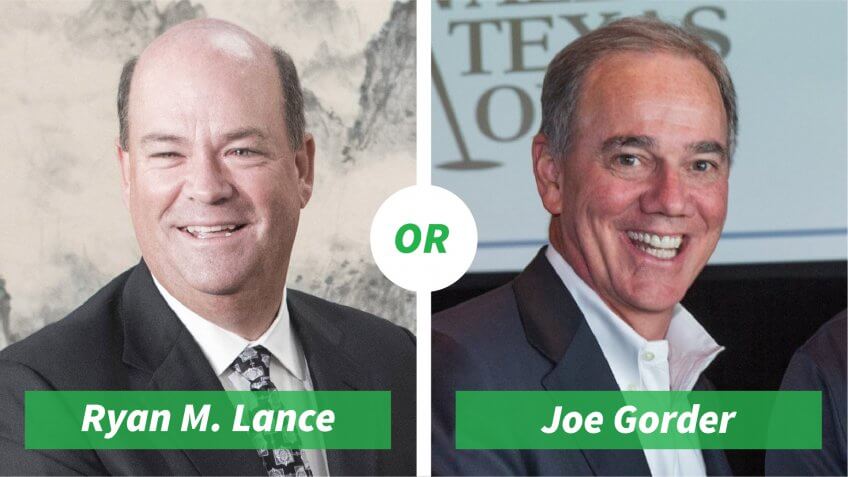 In 2012, Ryan M. Lance stepped into the role of chairman and CEO of ConocoPhillips. He also serves as chairman of the energy corporation’s executive committee.

Joe Gorder has been the chairman, president and CEO of Valero Energy Corporation since 2014. Before securing the company’s top spot, he served as Valero’s president and COO. 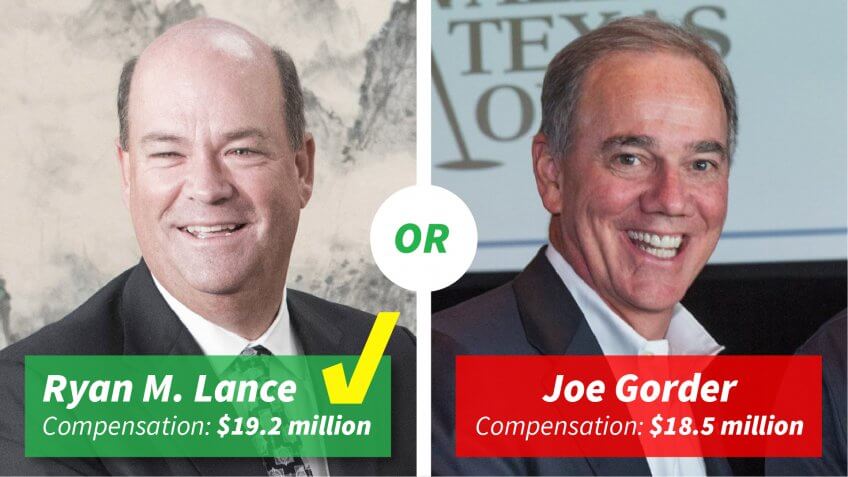 Gorder’s CEO compensation for 2016 was only slightly less than Lance’s. He earned a $1.5 million salary, $10.6 million in stock awards, $3 million in non-equity incentive plan compensation, a $3.3 million change in pension value and non-qualified deferred compensation earnings and $132,410 in other compensation, according to Valero’s 2017 proxy filing. 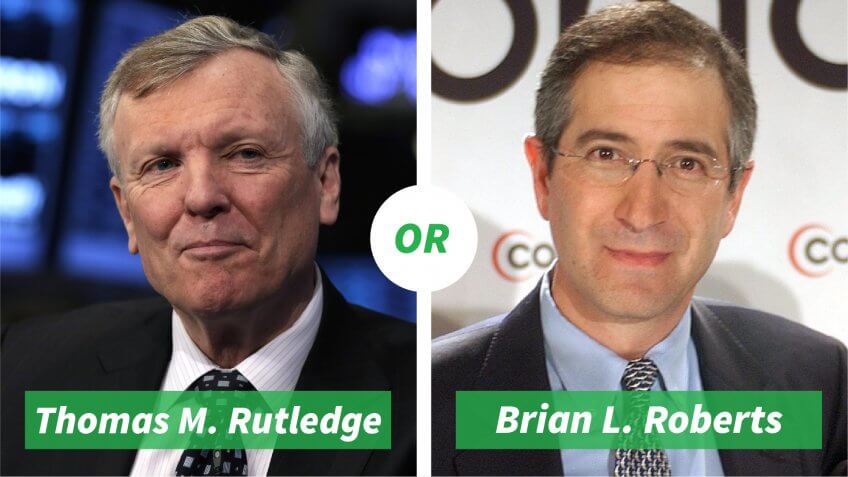 Thomas M. Rutledge has been the chairman and CEO of Charter Communications since 2012. Comcast CEO Brian L. Roberts was appointed to his role in 2002, and became chairman of the board in 2004. 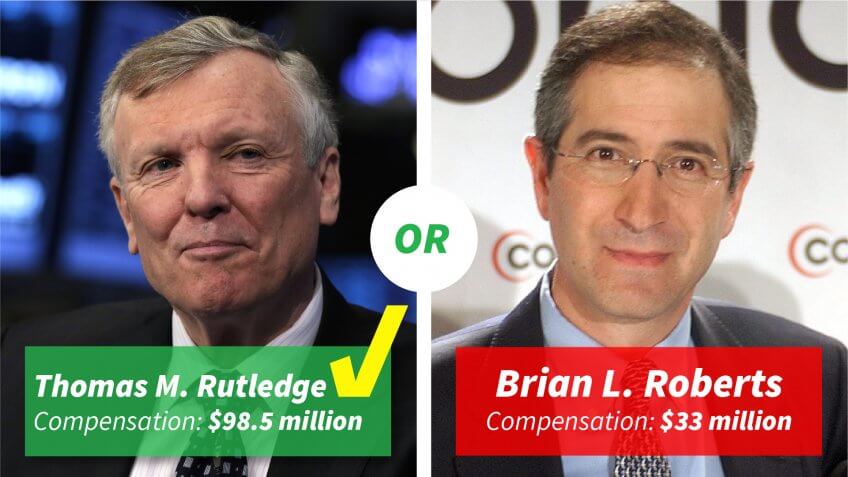 One of the top CEO salaries, Rutledge’s massive 2016 payday was largely due to the $78 million he received in option awards. He also garnered a $2 million salary, $10.1 million in stock awards, $7.7 million in non-equity incentive plan compensation, a $503,383 change in pension value and non-qualified deferred compensation earnings and $283,549 in other compensation, according to the Charter Communications’ 2017 proxy filing. Net worth information for Rutledge is not available.

Click through to discover the highest paid CEOs of 2018. 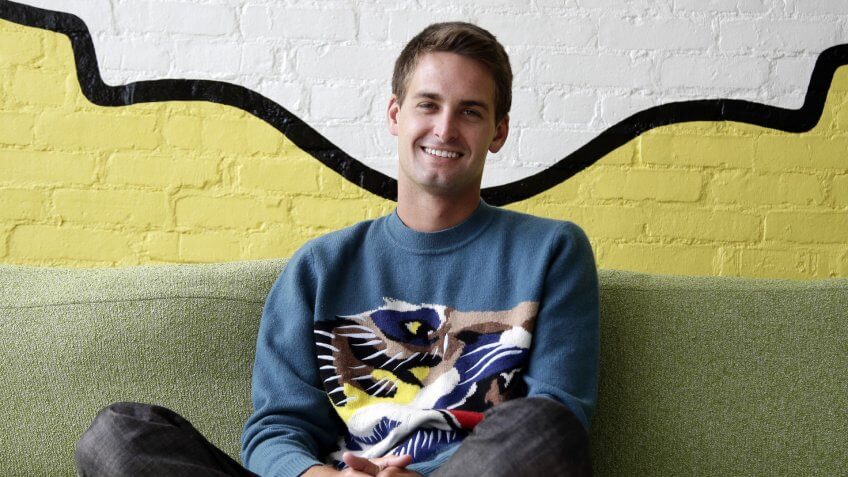 GOBankingRates > Net Worth > Business People > Quiz: See Which of These CEOs Gets Paid More