How Much Is Green Bay Packers Star Quarterback Aaron Rodgers Worth? 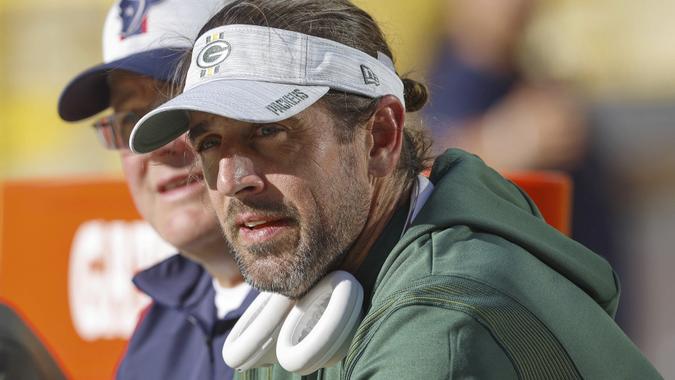 Aaron Rodgers may have handed his spot on the Green Bay Packers to Jordan Love when he tested positive for COVID-19 on Nov. 3. The quarterback will be quarantined for 10 days after contracting the virus, allowing Love to take over for one game — which could be just enough to bump Rogers from his starting QB spot.

In addition, because of his not-vaccinated status, the NFL announced they would be reviewing all of the Packers’ players for adherence to protocols.

Previously, he verbally agreed to a trade offer after the 2021 season, according to an Aug. 5 report from an NFL insider for Fox News’ Jay Glazer. After missing the summer’s offseason training and a minicamp, Rodgers returned to preseason training and is gearing up for his 14th and potentially final season with the Green Bay Packers.

See: How Much Athletes Make for Playoff Runs in the NBA, NFL and Other Sports
Learn: Quarterbacks Who Played in Multiple Super Bowls

At the time, it was uncertain who would be this season’s starting QB, with Rodger’s absence this summer leaving Jordan Love, a 2020 first-round draft, to prepare for the position. Midway through training camp in 2018, Rodgers became the highest-paid player in NFL history, signing a 4-year contract for $134 million, which included a signing bonus of $57.5 million and a $21.5 million yearly salary.

As of 2021, Aaron Rodgers’ net worth is an estimated $120 million, according to Celebrity Net Worth. Last year, Forbes reported Rodgers as the 45th highest-paid athlete in the world.

More: LeBron James, David Beckham and the Richest Athletes in the World

In July 2020, the highest-paid NFL player became Kansas City’s Patrick Mahomes with a 10-year and $503 million deal.. Last month, Rodgers declined a two-year contract extension with the Packers, which would have upped his salary to $45 million per year and made him surpass Mahomes once more as the highest-paid NFL player. Statistically, Rodgers is among the best quarterbacks of this era, alongside Mahomes and Tampa Bay Buccaneers’ Tom Brady.

One thing’s for sure, the 37-year-old Rodgers is still consistently one of the most elite quarterbacks in the NFL and has been since his college career; he had an over 65% pass completion record while playing for the California Golden Bears at the University of Berkeley.

Compare: The Richest Super Bowl MVPs of All Time

Rodgers was selected in the first round of the 2005 NFL Draft by the Packers after dropping out of his senior year of college. After three years of backing up Brett Favre, Rodgers settled into his long-standing position as the team’s starting quarterback in 2008.

In 2010, he led them to a victory in Super Bowl XLV over the Pittsburg Steelers and earned himself the Super Bowl MVP.

Rodgers was voted AP NFL Most Valuable Player Award in 2020, completing over 70 percent of his passes for 4,299 yards and a 48-5 touchdown-to-interception ratio.

It was during his acceptance speech at the NFL Honors award ceremony in February that Rodgers announced his secret engagement to 29-year-old actress Shailene Woodley, best known for her role in the “Divergent” film series and “The Fault in Our Stars.”

The couple was introduced to each other in the summer of 2020 and things quickly heated up, with the pair moving in together just months into dating. In March 2021, the actress confirmed that she and Rodgers had gotten engaged.

Endorsements and Other Ventures

Rodgers has made some lucrative deals off the field. The athlete raked in around $9 million last year in brand endorsements. He has worked with brands like Adidas, Panini, Bose, Prevea Healthcare, Pizza Hut, Sharpie, IZOD and State Farm Mutual Auto Insurance. His notable State Farm commercials are part of an estimated $2-3 million deal, which is “one of the richest endorsement deals in the NFL,” according to Forbes.

More: The 10 MLB Players Who Make the Most Money From Endorsements

The veteran QB also briefly featured on a second-season segment of the comedy series “Key & Peele” alongside other NFL players.

As for now, Rodgers has enjoyed his summer away from the field and has been traveling with his fiancé and friends around the world. The couple is in no rush to wed, given the increasing risks of the COVID pandemic. We’ll see what’s next for Rodgers once the 2021 season commences. The Packers’ first preseason game was on Saturday, August 14 against the Houston Texans.

Katherine Hoey is a 26-year-old freelance journalist currently living in Miami. The Long Island native graduated with a BA from The School of Journalism at Stony Brook University. She won the 2020 FOLIO award from the Fair Media Council for Best Use of Instagram.