How Rich Is Manny Pacquiao? 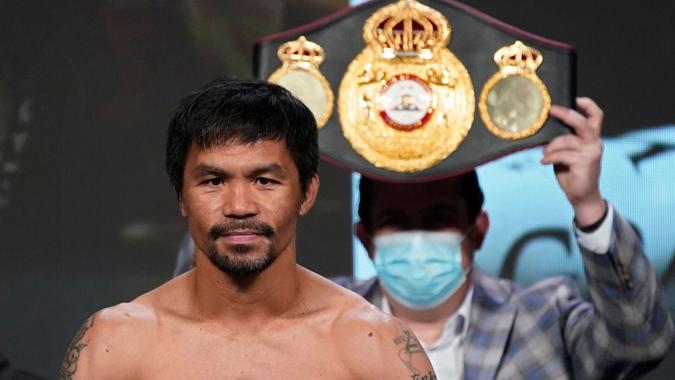 Manny Pacquiao, 42, announced his retirement from boxing only to put his hat into the political ring as a candidate for president of the Philippines. He is widely regarded as one of the best boxers of all time, having been proclaimed an eight-division world champion and won championships in separate weight classes over the span of his career. He is also an elected senator in his home country as well as a successful real estate investor, entrepreneur and philanthropist who has achieved success acting and singing.

See: Stimulus Update — States Give Out Thousands of Bonus $1,000 Checks — Will You Get One?
Find: Here’s How Much You Need to Earn to Be ‘Rich’ in 23 Major Countries Around the World

Pacquiao’s multiple wins and business savvy have amassed him a fortune of $220 million, according to Celebrity Net Worth. He was listed as the second-richest athlete in 2015 by Forbes.

Over his career, Pacquiao has taken home $500 million and change from fights and endorsement deals, Celebrity Net Worth reported. His most famous fight was against Floyd Mayweather in 2015, where he earned $130 million for the fight itself and bonus earnings from pay per view. The revenue from the 20 million people who have bought pay-per-views for his 25 participating events amounts to about $1.3 billion.

See: Top 10 Most Expensive Shoes Ever Made
Find: 11 Social Security Mistakes That Can Cost You a Fortune

Pacquiao is the only boxer in history to have won world championships in four different decades, and after he defeated Keith Thurman in 2019, at the age of 40, he was the oldest welterweight world champion, ESPN reported.

Pacquiao’s political career began in 2007, with an unsuccessful campaign for a seat in the House of Representatives of the Phillipines, according to Celebrity Net Worth. In May 2010, he ran successfully in a different district. He was elected to the Philippine Senate in 2016. Pacquiao filed his certificate of candidacy for the Philippine presidential race on Sept. 24, according to ESPN, and days later announced that he was retiring from boxing.

See: What Happens to Social Security When You Die?
Find: How Rich Is Former President Donald Trump?

Emmanuel Dapridran Pacquiao was born to Rosalio and Dionisia on Dec. 17, 1978 in Kibawe, Bukidnon. He is one of six children of the union, which ended in divorce, according to Celebrity Net Worth.

He had to drop out of high school to help his mother support their family, though he eventually earned his diploma after passing a high school equivalency exam.

At 14 and homeless, he went to work in in construction, according to an Instagram post provided by the a Philippines-based website, Politiko. Even in his impoverishment, he still sent money to his mother and siblings.

He began boxing as an amateur and won 60 of 64 matches.

Pacquiao’s first professional fight was as a junior flyweight in 1995. Three years later, he won the World Boxing Council flyweight title — his first major title, according to Britannica.

Over the years he kept winning, all the while gaining weight and competing in flyweight, featherweight, lightweight and welterweight matches. Out of 72 matches in his professional career, he has only lost eight times and out of those has only been knocked out three times. His final bout took place in August 2021 against Yordenis Ugás.

While boxing, he also acted in many Philippine films and put out two albums that were certified platinum locally in the Philippines.

See: The 8 Best Deals From Costco’s September Coupon Book
Find: Didn’t Get Your Child Tax Credit? Here’s How to Track It Down

In May 1999, Pacquiao married his wife Jinkee, with whom he has five children, including Mary Divine Grace, a. k. a. Princess, a popular YouTube vlogger.

Pacquiao owns 100 real estate properties, amounting to 1.569 billion Philippine pesos (US $30.92 million), PEP reported, which represent 46% of his net worth. About 4% of his assets consist of vehicles and 7% goes back into local businesses.

Time will tell if you’ll catch Manny Pacquiao on the global political stage as the president of the Philippines. Even if he isn’t boxing professionally anymore, he will remain a world champion.