How Much Money Would Biking To Work Save You Over a Year? 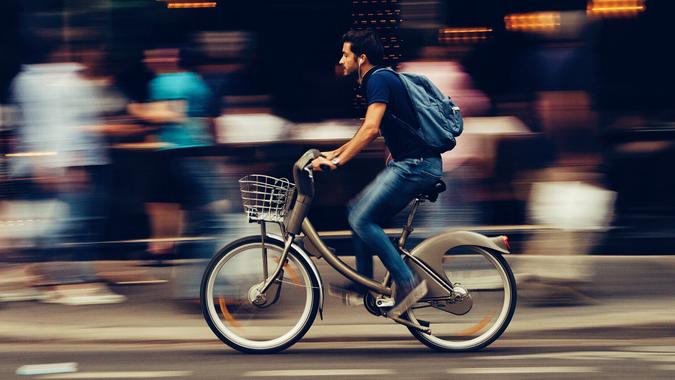 Imagine the pounds you could drop and the carbon you could avoid spewing into the atmosphere by riding your bike to work every day instead of commuting the old-fashioned way.

Now imagine the money you could save if you did it for an entire year.

Every mile you spend driving or riding on public transportation to and from work eats a little more from the paycheck that you go there to earn in the first place. If you choose your bike instead, your commute will be as close to free, clean and healthy as humanly possible.

If you’re considering challenging yourself to a two-wheeled commute, the going is bound to get tough. When it does, just smile as you pedal while thinking of all the money those two wheels are saving you.

Your Car Is Costing You Thousands

GOBankingRates used data from the Bureau of Labor Statistics (BLS) to give commuters an idea of what they could expect to save by ditching their vehicles in favor of bikes.

If you got rid of your car altogether, here’s a breakdown of how much cheaper life might be by avoiding the following expenses:

Again, that’s an academic synopsis based on BLS data. Keep reading to see how those numbers might play out in real life.

If You’ve Been Out, You Know You’ll Save Money on Gas

According to CRM.org, the 2022 calendar contains 260 working or business days. Because of where the weekends land, that’s one less than 2021. March and August are tied for the most working days, with 23 each.

Presuming a 10-mile commute each way, that’s 5,200 miles biked and not driven if you swap four wheels for two full-time.

That would represent a big break not only for the planet and your cardiovascular system but also for your wallet.

According to the Department of Energy, the average vehicle now gets a record-high 25.7 miles per gallon.

That translates into 202.33 gallons of gas never burned or bought if you ride your bike to work. With AAA quoting the current national average price of gas at $4.85 per gallon, that’s $981.30 per year that you’ll save in gas alone by turning pedals instead of pressing one.

Then There’s Money Never Spent on Maintenance, Repairs and Tires

According to a 2021 study from AAA, vehicle maintenance and repairs cost an average of 9.55 cents per mile. Keeping with the same 5,200-mile annual commuting scenario, that’s savings of $497 per year.

Unless you’re commuting to Mars, you shouldn’t have to get new tires every year, but you will eventually. According to Consumer Reports, the average shopper pays an estimated price of $167 per tire for their vehicles. A single commuter bike tire, on the other hand, costs only $30 to $40 to replace, according to The Mount Bike.

You might be able to save money on car insurance even if you bike to work only some of the time. That’s because you can reduce what insurers refer to as “commuting miles,” according to Kelley Blue Book (KBB).

Since commuting is the primary reason that most people drive their vehicles, insurance companies typically allow up to 20 miles each way to work before they start increasing premiums. Carriers use commuting miles to determine whether a driver’s annual mileage estimates are realistic — and insurers charge more for longer commutes. Commuters are most likely to pay more for longer commutes if they take their daily drives in densely populated areas where accidents are more common.

Even if you don’t eliminate commuting miles altogether, you can reduce them by pedaling to work at least some of the time.

On the other end of the spectrum are infrequent drivers. The average motorist drives 14,263 miles per year, according to the most recent data from the United States Department of Transportation Federal Highway Administration.

The commuter in the gas-costs example drove 5,200 miles per year — but that was for a 20-mile round-trip commute. The industry standard commuter-mile allowance is double — 20 miles each way — or 10,400 miles annually. So subtracted from the yearly average — 14,263 — that’s just 3,863 miles driven per year for commuters who bike to work.

According to CNET, motorists who cover less than 7,500 miles per year are considered low-mileage drivers and qualify for reduced insurance rates. Those who drive less than 5,000 miles — the full-time bike commuter in this example easily qualifies — pay the lowest rates of all.

Even If You Don’t Drive, You’ll Save on Public Transportation

The cost of public transportation varies so much from city to city that it’s impossible to calculate a national average — but if you’re riding, you’re paying.

For example, a recent study from Lending Tree shows that commuters in Champaign, Ill., can get a 30-day unlimited commuter transit pass for just $20 per month. The median income there, however, is a paltry $13,200.

On the other end of the spectrum is Los Angeles, where a monthly pass costs $122 — the highest of any city in America. Transit is so pricey in L.A. that commuting gobbles up 8.69% of the average rider’s income, compared to 1.8% in Champaign.

Therefore, depending on where you live, you might save between $240 and $1,464 per year by riding your bike to work instead of taking public transportation.