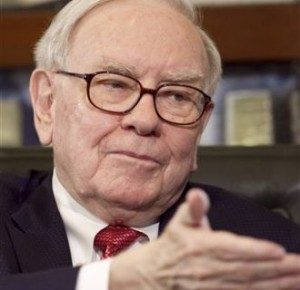 Warren Buffett is continuing to prod the GOP into taking greater financial responsibility by promising a dollar-for-dollar match of any funds contributed by Republicans in Congress toward the national debt.

In a recent interview with Time, Buffett expressed that for every $1 donation offered by a Republican representative of Congress, he would match that donation with $1.

In 2011, Warren Buffett publicized his belief that Congress should raise taxes on the wealthy–Americans making at least $1 million annually–in order to solve many of the major economic issues the country is facing, like the national debt. He stated that the nation’s top earners are not being taxed at a high enough rate.

In response to Buffett’s statement on taxing the wealthy, Mitch McConnell, Senate Republican leader, countered with a recommendation that Buffett, along with his wealthy supporters, simply donate funds to relieve the country’s national debt.

It turns out that Buffett is accepting the challenge and even upped the ante by provoking Congressional Republicans into a money-matching war. In addition to the $1-$1 donation offer for Republicans of Congress, Buffett turned the spotlight onto McConnell with a declaration he will match $3 for every $1 McConnell donates toward lowering the national debt.

The Math Behind Warren Buffett’s Plan

Despite Buffett’s admirable intentions, soliciting donations from the GOP may not suffice in abolishing the national debt.

According to the National Debt Clock, the country’s debt is at about $15 trillion, a figure that is steadily increasing by the minute. Even if the 535 members of Congress (Democrats and Republicans alike) and President Obama donated $100,000 each year, over the course of four years, the collected donations would only amount to just over $214 million.

When Buffett’s match is added to the donation pool, the dent made in the national debt total is far from impressive, as the U.S. debt would still linger close to its original $15 trillion mark.

The essence of the Warren Buffett donation challenge is at best a way to spur the Republican party into action. Clearly, there is still a need for a long-term solution which is still undefined and hotly contested to date. Bringing Home the Bacon: The Origin of Popular Finance Sayings