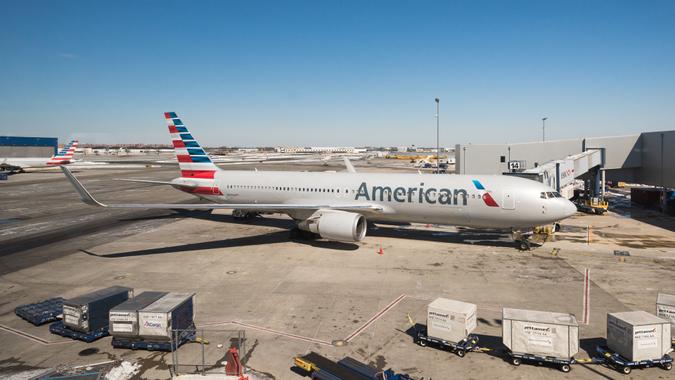 Travelers planning to fly over the holidays got a stark reminder of what can go wrong in the current operating environment when American Airlines canceled hundreds of flights over the weekend due to staffing shortages and bad weather.

See: From Airfare to Gifts to Your Tree, How To Save on Every Aspect of Holiday Spending
Find: How to Book Holiday Travel You Can Cancel

On Sunday alone, the airline had canceled more than 900 flights by late afternoon, ABC News reported. That represented roughly one-third of Americans’ Sunday schedule. Those followed the cancellation of almost 900 flights the two previous days, according to data from FlightAware, which also reported that American had already canceled more than 100 Monday flights.

Most of Sunday’s cancellations — about two-thirds — were caused by a lack of flight attendants in the right locations, the Associated Press reported. Just about all of the other cancellations were due to pilot shortages. But high winds also caused problems, forcing delays, cancellations and runway closures at Dallas/Fort Worth International Airport, American’s busiest hub.

“To make sure we are taking care of our customers and providing scheduling certainty for our crews, we have adjusted our operation for the last few days this month by proactively canceling some flights,” American Airline Chief Operating Officer David Seymour said in a Saturday note to employees.

American’s problems followed similar disruptions at Southwest Airlines earlier in October – not to mention numerous delayed or canceled flights over the summer, when carriers first ran into surging demand and worker shortages.

This has led to worries about whether the U.S. airline industry is prepared to handle what is expected to be a heavy holiday travel season. For its part, American Airlines said nearly 1,800 flight attendants will start returning to work this week, while the company also plans to add at least 600 new employees by the end of 2021. Meanwhile, pilots and reservations agents are being recruited ahead of the holidays.

If you plan to book flights over the holidays, or have already booked them, it’s important to be prepared for the worst. This is especially true with ultra-low-cost airlines such as Spirit, Frontier and Allegiant, whose services might be especially vulnerable to delays and disruptions, The New York Times reported.

One option if your flight is canceled is to look into getting a refund. According to the U.S. Department of Transportation, passengers are entitled to refunds “if the airline canceled a flight, regardless of the reason, and the passenger chooses not to travel.”

Another option is to research alternative flights with other carriers. In some cases, the airline that canceled your flight might even put you on another carrier.

“You may be able to buy a ticket on another airline for less than you expect. Or a modest increment might be worth it,” Gary Leff, who writes the aviation blog View From the Wing, told The New York Times.

You can also request an alternate route with your airline — as long as you do it the right way. The best tip is to use an online chat function on the airline’s website rather than to call directly. Chat representatives can handle multiple conversations at the same time, while overwhelmed phone reps might put you on hold for hours.

See: One Expert Tip Can Save You Big Money When Shopping for Airline Tickets
Find: How Far You Could Travel on Current Airline Credit Card Bonuses

Finally, given the current uncertainty of flights, you might want to look into travel insurance. As GOBankingRates previously reported, travel insurance covers costs associated with traveling, including flight cancellations. It is often bundled or sold as an add-on when booking a trip with a travel agent.