For most people, charitable contributions are mostly about what matters most to them — a way to help those in need or begin righting a wrong. However, charitable contributions are also an excellent way for some earners to reduce their tax burden. And if you’re interested in maximizing the benefit to both you and the organization you’re contributing to, donating stocks can be a win-win situation that’s hard to pass up.

In fact, donating your stock can allow you to avoid paying capital gains taxes on your returns, ultimately making for a larger contribution for the nonprofit and a larger deduction for you. So, while donating a stock might not be your first impulse, there are a number of reasons why you should seriously consider it.

Donating stock to charity offers a win-win for both you and the organization you’re donating to. A donation of stock allows you to deduct the full market value of the stock from your taxable income. Essentially, you’re taking a capital gain that you would otherwise owe taxes on and converting it into a deduction that will save you taxes on your normal income, so you’re avoiding taxes in two places. And the charity gets a larger donation than they could expect if you had to sell the stock and pay capital gains tax prior to making your donation.

There are some rules, though, dictating just how much tax benefit you can claim from a donation of stock. The first important consideration is the cap on charitable deductions. Usually, you’re only allowed to reduce your taxable income by a maximum of 50 percent with charitable contributions. However, that cap is reduced to 30 percent for “capital gain property” if you choose to deduct the full market value of that donation.

You can avoid that 30 percent cap by reducing the fair market price of your donation by any taxable long-term capital gains, i.e. give the IRS the value you bought at rather than the current price. In that case, your deductions are limited to 50 percent of your taxable income — the normal cap for charitable deductions. There could be some instances where being able to claim the additional tax deductions could be more beneficial, so be sure to look at both options if you’re planning on donating enough stock that you have a choice.

You should also consider your other charitable contributions as the 50 percent cap on deductions applies to your total combined contributions. So, if you’ve made a donation of stock that’s 30 percent of your taxable income and donations of cash that are another 40 percent (wow, good for you!), you would only be able to deduct half your cash contributions before hitting the combined cap of 50 percent.

Related: How to Know If You Can Really Write Off That Donation

How to Donate Depreciated Stocks to Charity

It’s also important to note that in the event that the stock has lost value, the benefits are greatly reduced. In that instance, selling and then making a donation in cash makes more sense. By realizing a capital loss, you can reduce capital gains elsewhere to reduce your tax burden and the deduction for your charitable contribution — and the size of your donation — would remain the same.

Here’s a hypothetical example of how a donation of stock can be of greater benefit for both you and your favorite charity.

Say you have $10,000 of stock that you purchased at a price of $5,000 some 10 years earlier. Even if your plan is to donate all of the proceeds from the sale to charity, you’ll have to make your donation after you pay taxes on those capital gains. So, if you’re earning less than $425,800 that year, you’ll owe 15 percent in capital gains tax on that $5,000 gain you just realized — or $750. So you’ll have $9,250 left to give to your favorite charity, should you choose to sell and then donate the cash.

But with a donation in stock, you can give the $10,000 in stock directly to the charity so you won’t have to pay that $750 in capital gains tax. Once more, since your donation is now the full $10,000, that same $750 you would have owed in taxes is now money you can deduct from your taxable income as a charitable contribution. Win-win.

See: Here’s Every Single Tax Deduction You Could Possibly Ask For

Strategies for Maximizing Your Tax Benefit

In addition to offering a great way to get even more mileage out of your charitable giving, the personal benefits can also be considerable.

For starters, higher earners who might have some portion of their income falling into one of the higher tax brackets could be getting a double-whammy of benefits. Not only are you effectively skipping out on the capital gains tax — which you would probably be paying at the maximum long-term capital gains rate of 20 percent — but you’re reducing the portion of your income that you might be paying 25, 30 or even 37 percent taxes on.

There’s also an important chance to use donations to your favorite organizations to rebalance your portfolio. If you have plans for making charitable contributions this year while you’re also concerned that a specific holding is taking up too large a portion of your investments, you can potentially kill two birds with one stone by using that stock you’ll be selling anyway to make your donation.

Finally, if you’re a more active trader or someone who enjoys being a hands-on manager of their portfolio, you might see a donation of a top-performing stock as a way to sell high without actually selling. If you’re seeing signs that make you think a stock is near its peak, you’re likely considering a sale. In that case, you might see considerable benefits to reducing that especially large taxable capital gain — and if you’re in a top tax bracket — potentially avoiding a big chunk of your income taxes while you’re at it.

Don’t Miss: A List of Every Document You Need to File Taxes and Get Your Write-Off

Strengthen Your Giving by Donating Stock

Donating stock might feel a little unorthodox for a lot of people, but it can have significant benefits on your taxes, especially if you have a high annual income. You can reduce your taxable income, avoiding owing taxes on a capital gain and support an organization you believe in, all in one fell swoop.

Just be sure you don’t try to take more deductions than you’re legally allowed or use a stock where you’ve lost money.

Check out these 16 commonly missed tax deductions you should take. 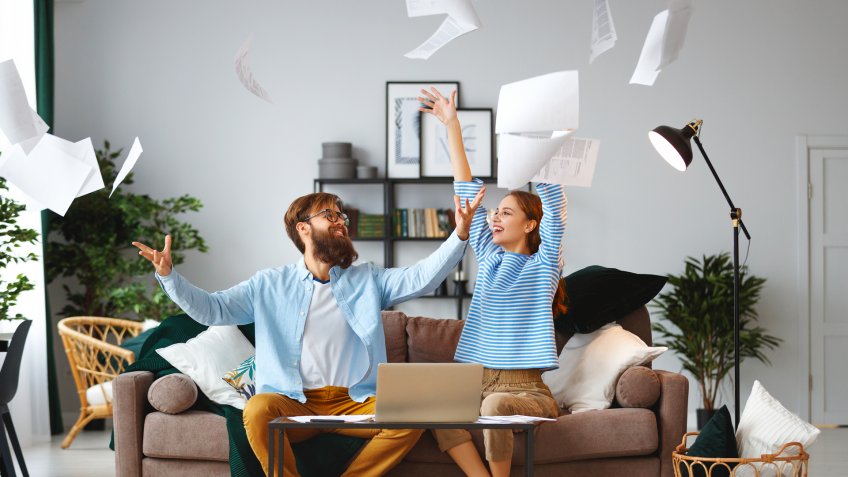 New Homeowners: Here’s What You Need To Know for Your Taxes

Homeowners' tax credits could make for a lucrative tax season.

GOBankingRates > Taxes > Deductions > Donating Stock to Charity Is the Ultimate Win-Win: Here’s Why