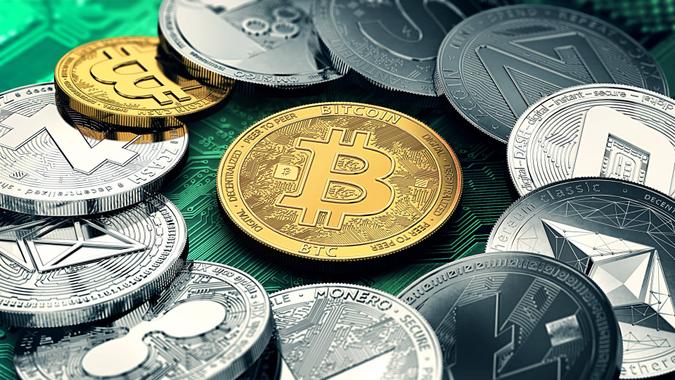 The value of the cryptocurrency market hit $2 trillion yesterday, with Bitcoin accounting for half of the market capitalization.

As of this morning, Bitcoin, which broke the $60,000 ceiling last month, stood at $58,000, according to CoinMarketCap data. Its valuation stands at $1.1 trillion.

Ether, the second largest cryptocurrency, recorded an all-time high near $2,100 last week and is up more than 180% year-to-date, according to CoinDesk.

Overall, the five next biggest coins after Bitcoin — Ether, Binance Coin, Polkadot, Tether and Cardano — have a combined value of about $422 billion, according to Bloomberg.

See: Polkadot (DOT) — What It Is, What It’s Worth and Should You Be Investing?
Find: What Is Cardano (ADA) and Is It Worth Investing In?

Bitcoin has been on a meteoric rise in the past few months amid increased institutional interest. Last week, Goldman Sachs said it would start offering exposure to Bitcoin and other cryptos to its wealth management clients in the second quarter. The investment bank’s announcement followed that of Morgan Stanley last month, which said it would offer Bitcoin to its wealthier clients — making it the first U.S. bank to do so.

And Elon Musk, CEO of Tesla, which bought $1.5 billion in Bitcoin earlier this year, said in March that you could finally buy a Tesla with Bitcoin, after having announced it would accept the cryptocurrency as a form of payment in a Securities and Exchange Commission filing in January.

Just yesterday, Grayscale Bitcoin Trust, the world’s largest and most liquid Bitcoin investment product in the world, with $34 billion under management, said it plans to convert the trust to an exchange-traded fund, according to a statement.

“The digital asset market is developing and maturing every day, and while this may bring new challenges, it’s never been more exciting to be a part of this industry,” the company said in the statement. “Grayscale is as committed as ever to expanding access to digital currencies and offering investors more opportunities to invest in this asset class. Our eyes are focused on the long term, and we thank you for your continued support.”