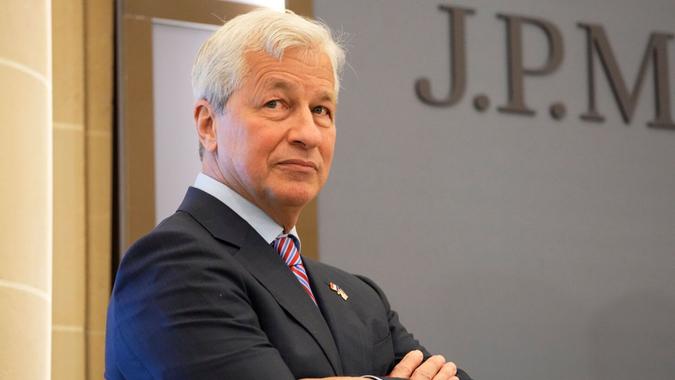 JPMorgan made a big step into the metaverse, becoming the first bank to open a lounge in Decentraland, in the Metajuku mall. The launch coincides with the bank’s release of a paper on the space, which says that “the metaverse will likely infiltrate every sector in some way in the coming years, with the market opportunity estimated at over $1 trillion in yearly revenues.”

“Another first by Onyx by J.P. Morgan! The first major bank in the #Metaverse Visit us at the Onyx by J.P. Morgan lounge at the Metajuku mall in Decentraland!” JPMorgan Onyx CEO Umar Farooq wrote on Linkedin on Tuesday, Feb. 15. Onyx is JPMorgan’s blockchain unit, founded in 2020.

This represents a 180 for the financial behemoth, as CEO Jamie Dimon has been known for his crytpo-skeptic stance, going as far as saying that Bitcoin was “worthless,” as GOBankingRates previously reported.

But times are changing, and now, visitors are greeted in the virtual lounge In the Metajuku district by a digital portrait of Jamie Dimon and a roaming tiger, Bloomberg reported. Metajuku is a shopping district in Decentraland developed by Republic Realm and inspired by Harajuku, a district in Tokyo known as the center of Japanese street fashion, according to Republic Realm.

Saro McKenna, co-founder of Alien Worlds, told GOBankingRates that while Dimon has not been shy in airing his skepticism, he has admitted that blockchain could have real use cases in the future of finance.

“Opening up a bank in Decentraland does not necessarily mean that JP Morgan will be fully embracing crypto, but rather that the bank has recognized the potential that crypto technology has – the distributed ledger, the cryptography, communal forms of consensus – as well as the pivotal role the rapidly developing Metaverse will play in our lives as it grows and develops,” McKenna said.

“Imagine being able to open up a new account, deposit checks or work through a mortgage application digitally inside the metaverse all while never having to leave your home? I’m sure big financial institutions like JP Morgan are aiming to offer their services in the metaverse, and their enthusiasm here is to be commended even if the big banks haven’t always been supportive of crypto and the blockchain industry at large,” McKenna added.

Indeed, JPMorgan argues in its “Opportunities in the Metaverse” paper, that it is difficult to base a business strategy on such a dynamic space, characterized by explosive growth and the continuous innovation of new entrants.

“However, the costs and risks of engaging early and consistently in order to build internal intellectual property, develop hypotheses about future business models, and identify ecosystem partners and collaborators are relatively low,” according to the report. “The asymmetrical risk of being left behind is worth the incremental investment needed to get started and to explore this new digital landscape for yourself.”

Zachary Friedman, co-founder and COO of Secure Digital Markets, told GOBankingRates that JPMorgan’s recent entry into the metaverse through opening a lounge in Decentraland “confirms what many of us in the space have long forecast – that the ongoing virtual land grab holds tremendous opportunity for potential investors of all stripes, from individuals to institutions.”

“We’re still witnessing the rapid proliferation of potential applications that the virtual space can bring to fruition, and it’s been incredibly exciting to help a number of our clients bring their visions to life already. With a portrait of Jamie Dimon now hanging in Decentraland, hopefully, JPMorgan’s outlook on the digital asset space will mature to fully reflect its investment worthiness,” Friedman said.

Other industry experts point out that historically, Wall Street is slow to adopt change, mocks it, then takes credit for leading the change. In turn, Mark Elenowitz, co-founder of Upstream, told GOBankingRates that the crypto industry should be flattered that all the big banks are suddenly taking the space seriously.

“It’s been a long road to get to this point, and the industry has certainly received quite a bit of flack from the big Wall Street players,” Elenowitz said. “It’s hard to argue with results. I’m certainly supportive of big financial institutions joining us in a cooperative way because these relationships can be, and are, mutually beneficial. The combination of traditional financial institutions’ client base with the value propositions available in crypto can only result in increased innovation and an overall improved industry.”

See: Gen Z Wants Metaverse To Resemble Online Shopping Mall, New Survey Finds
Find: The Metaverse: What You Should Consider Before Investing in a Virtual Space

He added that decentralized, permissionless, open and inclusive finance is the future.

“Whether big banks can embrace these concepts in a meaningful way has yet to be seen, but I commend them for trying. I’m excited that they’re taking notice of what we are doing over here in the crypto world — and possibly, soon, in a metaverse in which digital avatars are interacting, working, making money, and tapping into the real potential that crypto has to offer.”