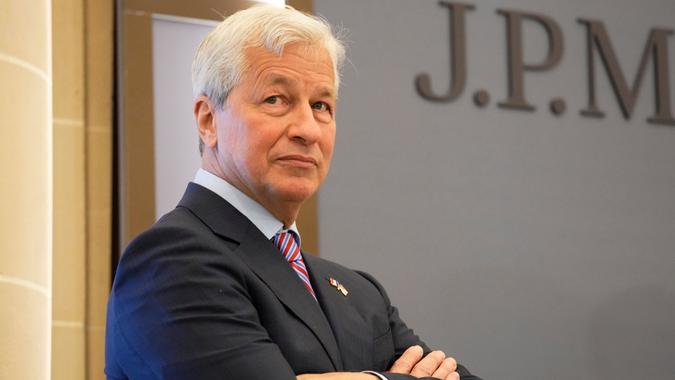 Amid increasing institutional interest and a recent spike in Bitcoin’s price, JPMorgan Chase chairman and CEO Jamie Dimon, known for its skepticism toward Bitcoin, went a step further by calling the crypto “worthless” yesterday.

“So strange. For a man who has done a brilliant job running a giant bank, his answers around $BTC are sophomoric and he keeps doubling down on them. I pray I stay open minded my whole life,” Novogratz tweeted yesterday.

So strange. For a man who has done a brilliant job running a giant bank, his answers around $BTC are sophomoric and he keeps doubling down on them. I pray I stay open minded my whole life. https://t.co/d4rJpUFGKH

“I personally think that Jaime [sic] Dimon is worth more to Bitcoin…” Twitter’s Jack Dorsey tweeted back.

As GOBankingRates reported last week, despite 2021 continuing to be a wild ride for cryptos — and Bitcoin especially — and naysayers who see it as a passing fad, Bitcoin is the best performing asset so far this year, beating both stocks and commodities.

During an Institute of International Finance event on Monday, Dimon doubled down on its stance, saying “I personally think that bitcoin is worthless,” “Our clients are adults. They disagree. That’s what makes markets,” according to MarketWatch. “So, if they want to have access to buy yourself bitcoin, we can’t custody it, but we could give them legitimate, as clean as possible, access.”

Ron Levy, co-founder of The Crypto Company, told GOBankingRates that while there is clear value to bitcoin and cryptocurrency, most people have a hard time understanding its backing.

“Regulation would be a huge step in further cementing the legitimacy of bitcoin and the crypto market as a whole, and will expand education and get more people involved, which would in turn increase values over time,” he said. “Crypto democratized the retail investor space and it’s brought millions of people an opportunity to participate in the value creation of a whole new, and very inclusive, multi-trillion-dollar industry.”

A few market participants are also warry of Bitcoin, including Bryan Slusarchuk, CEO of Fosterville South, who told GOBankingRates that the crypto has attracted a new generation of investors and speculators who generally distrust fiat currency.

“Paper currencies are being printed with reckless abandon all over the world and are becoming inherently less valuable every minute., so I do understand the allure of Bitcoin given its artificially created scarcity,” he stated. “But, as it is so new it has yet to develop a meaningful track record as a currency. Gold, on the other hand, is finite by nature and has proven itself as a reliable currency for thousands of years. While many competitor currencies have come and gone, only gold has proven itself as a long term store of wealth, and a hedge against uncertainty and real money.”

It’s interesting to note that other Wall Street giants have embraced an entirely different stance toward Bitcoin and cryptos recently. For example, last week, Bank of America not only launched its digital asset research with the publication of a report titled “Digital Assets Primer: Only the First Inning,” but also called the digital asset sector “too large to ignore,” citing a “$2tn+ market value and 200mn+ users.”

“We believe crypto-based digital assets could form an entirely new asset class. Bitcoin is important with a market value of ~$900bn, but the digital asset ecosystem is so much more,” according to the report.

See: Nearly 40% of America’s Wealthiest Billionaires Give Relatively Nothing to Charity
Find: 6 Best Crypto ETFs To Look For in 2021

BofA added in the report sent to GOBankingRates that despite potential regulatory headwinds (maybe tailwinds ultimately), “we are bullish on the long-term prospects for the digital asset ecosystem as it enters the mainstream. We anticipate significant growth as digital asset use cases move beyond bitcoin’s store of value thesis to an industry characterized by product innovation, regulatory clarity, increased institutional participation and mainstream adoption.”

Bitcoin is hovering around $56,000 today, according to CoinMarketCap data.