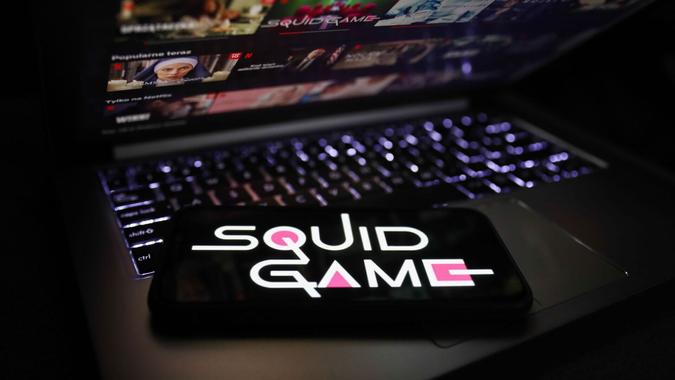 Even if you don’t watch “Squid Game” — the dystopian Korean drama that has become a global sensation while airing on Netflix — you’ve probably heard of it. It is not only Netflix’s biggest TV show ever, but it’s also a cash cow, producing an estimated $891 million in “impact value,” according to a Variety article that cited Bloomberg data.

See: Netflix Partners With Walmart to Sell ‘Squid Game’ & ‘Stranger Things’ Show Merch
Find: How Much Is Netflix Worth?

That’s a pretty good piece of change, considering that Netflix reportedly paid only $21.4 million for the series, which premiered four weeks ago. In the case of “Squid Games,” the financial windfall goes beyond just a big uptick in subscriber viewing. It also means a higher stock price, helped by the buzz the series has generated pretty much everywhere.

As of midday Monday, Netflix’s stock price had risen by about 24% over the past couple of months. It’s up more than 20% for the year, despite spending much of 2021 either moving sideways or south. The company’s stock performance this year is better than those of Apple and Amazon, CNN Business reported, and about on par with Facebook.

Netflix, which is scheduled to report third-quarter earnings on Tuesday, is also beating media rivals such as Disney, ViacomCBS, Comcast and WarnerMedia parent AT&T.

Not surprisingly, “Squid Game” has played a major role in Netflix’s turnaround. In the 23 days following the show’s Sept. 17 debut, some 132 million Netflix households streamed at least two minutes of the show, according to Bloomberg. About 89% of those viewers watched at least 75 minutes, while 66% finished the entire series within the first 23 days of its release. Overall, Netflix users streamed more than 1.4 billion hours of “Squid Game” over that 23-day period.

So is it a good time to buy Netflix stock? You might want to wait until after Q3 results come in tomorrow. Analysts expect revenue of $7.5 billion, which would be a gain of 17% from the prior year. Earnings are seen climbing 47% to $2.56 a share.

See: Most Expensive Movies Debuting on Streaming in 2021
Find: Which Streaming Services Give You the Most for Your Money?

But most eyes will be on Netflix’s subscriber count, which had been a concern earlier in the year. Analysts estimate that the company added roughly 4 million subscribers during the third quarter, which would bring the worldwide total to 213.3 million.

Wall Street will also be keeping a close watch on Netflix’s guidance for the fourth quarter to see if it meets the lofty expectations of analysts, who project 8 million new subscribers during Q4. If the company falls short on some of those numbers, don’t be surprised if its stock price takes a hit.