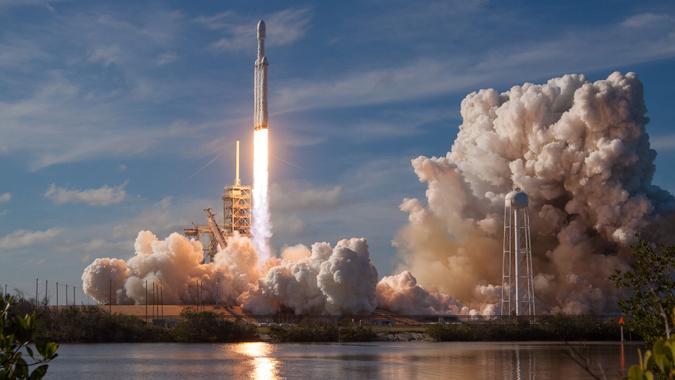 See: Endeavor Files for IPO, Plans to Add Elon Musk to its Board of Directors
Find: Amazon Makes a Big Bet on Space

Musk’s SpaceX beat out Jeff Bezos’ Blue Origin in landing a NASA contract to build spacecraft designed to land astronauts on the moon for the first time since the last Apollo mission nearly 50 years ago. As The Washington Post reported, the $2.9 billion contract for the “human landing system” puts SpaceX among the nation’s elite aerospace companies.

The win over Blue Origin shocked many industry observers — in part because of that company’s partnerships with aerospace giants Lockheed Martin, Northrop Grumman and Draper. SpaceX also beat out Dynetics, a defense contractor based in Huntsville, Ala.

Although SpaceX, Blue Origin and Dynetics were all originally chosen for the first phase of the contract, NASA reportedly chose SpaceX to maintain a competitive environment.

See: 5 Space Stocks to Keep Your Eye On
Find: Elon Musk’s Biggest Bets That Paid Off

The contract is part of NASA’s Artemis program to send astronauts back to the moon. According to a NASA press release, the agency selected SpaceX to continue development of the first commercial human lander that will carry the next two American astronauts to the lunar surface — at least one of whom will be the first woman to make such a trip.

The moon program comes during a busy time for NASA. In February, its Perseverance rover landed on Mars’ Jezero Crater as part of the Mars 2020 mission. And on Monday, a small robotic helicopter named Ingenuity lifted off from the surface of Mars, making it the first aircraft of its kind to achieve flight in another world.

SpaceX was founded by Musk in 2002 with the goal of flying humans to Mars. In the years since, the company has disrupted the space industry and also drawn plenty of investment capital.

The SpaceNews industry website reported on Friday that SpaceX added more than $300 million in a fundraising round announced earlier this year to support work on its Starship launch system and Starlink satellite constellation. SpaceX has now raised $1.164 billion, SpaceNews said.