Inside the Cola Wars: The History of Coca-Cola and Pepsi’s Rivalry 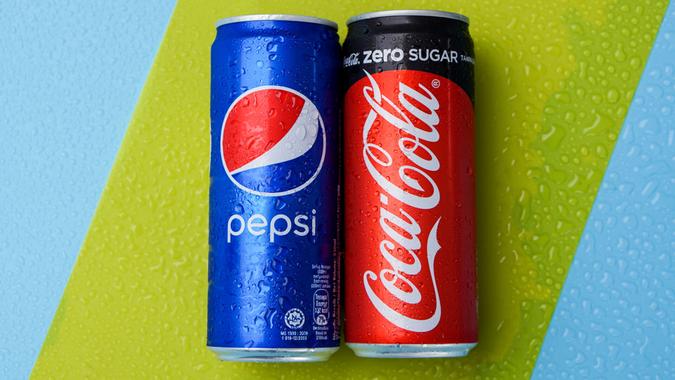 Both Coca-Cola and Pepsi can trace their origins back to the 1890s, and the two sodas seemed to be able to peacefully co-exist until nearly a century later. But in the 1980s, the companies began directly taking aim at each other through their respective marketing campaigns during what is now known as the “Cola Wars.” Here’s a look at how that rivalry started — and where the two companies are now.

Support: Don’t Miss Out on Nominating Your Favorite Small Business To Be Featured on GOBankingRates — Ends May 31

A Brief History of Coke and Pepsi

For many years, Coke was the more popular drink while the Pepsi-Cola Company struggled financially and went through several reorganizations. Then, in 1975, Pepsi took its first direct hit at its rival.

The “Pepsi Challenge” was the unofficial start of the soda rivalry. In 1975, Pepsi launched a marketing campaign that showed that during a blind taste test, more people preferred Pepsi over Coke.

“The Pepsi Challenge was not just a marketing gimmick — it was true,” David Greising, author of “I’d Like the World To Buy a Coke,” told the History Channel. According to Greising, internal studies at Coca-Cola “confirmed what the Pepsi Challenge was showing, which is that if you just look at the taste of the beverage, consumers preferred Pepsi.”

Although Coca-Cola was still the more popular beverage, its marketing share was now declining as Pepsi’s began to rise.

In order to stay competitive and keep its share of the soda market, Coca-Cola began introducing new products. Diet Coke was launched in 1982, and caffeine-free versions of both Coke and Diet Coke were introduced in 1983.

Check Out: Corn Flakes, Mountain Dew and 9 Other Beloved Brands With a Twisted History

Then in 1985, Coca-Cola made one of its most controversial moves when it launched “New Coke,” boasting a new, sweeter recipe more similar to Pepsi’s. This pivot backfired — consumers were outraged about the change and demanded the return of the original product.

Pepsi Goes on the Attack

Pepsi capitalized on the “New Coke” backlash by releasing a commercial showing a young girl criticizing the brand, then trying a Pepsi and loving it. The commercial declared that Pepsi was “the choice of a new generation.”

Meanwhile, Coke was backtracking on its decision to switch its formula. Just three months after launching “New Coke,” Coca-Cola announced that it was relaunching its original soda as “Coca-Cola Classic.”

See the List: Big-Name Brands That Have Been Around for More Than a Century

After Its Setback, Coca-Cola Comes Out on Top

Although the “New Coke” debacle could have been a disaster for Coca-Cola, it actually ended up paying off for the brand. People were excited about the return of Coca-Cola Classic, and began buying more Coke as a result.

“People all of a sudden wanted to actually taste the beverage again,” Greising told the History Channel.

Coke has been able to ride this wave in the decades since, with Coca-Cola continuing to top Pepsi’s yearly sales going forward.

“Occupying the top two rankings would mark a historic win for Coca-Cola Co. in its decades-old rivalry with PepsiCo Inc., which has seen its market share slip in recent years and is trying to retool its marketing,” the article stated.

Where Coke and Pepsi Stand Now

Which Is the Better Investment?

Both Coca-Cola and PepsiCo are dividend-paying stocks, and both have been able to pay and raise their dividends through several challenging economic cycles, Investor Place reported. Both companies are considered “dividend kings” because they have provided shareholders a dividend increase for at least 50 consecutive years.

“We expect that both of these dividend kings will continue to grow dividends as their products are used and trusted by consumers billions of times each day,” the Investor Place analysis of these two companies states. “As a result, both names [offer] a substantial competitive advantage to peers.”

However, when it comes to which is the better investment, Pepsi might be the winner of this battle.

“We believe that PepsiCo is the better-positioned of the two companies due to its snack business, which offers more diversity away from beverages,” the Investor Place analysis states. “Even though Coca-Cola’s dividend growth streak is longer and its yield is slightly higher, PepsiCo has shown stronger growth in the past decade due to its high-growth snacks business, a trend we expect to continue moving forward.”