Virgin Galactic, Blue Origin and All the Other Names That Made It Big in Private Space Travel in 2021 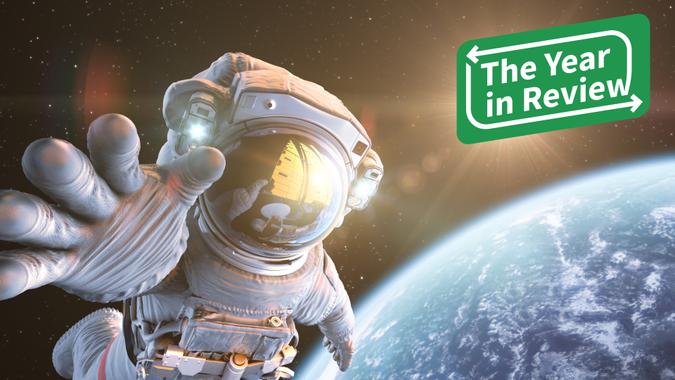 Space tourism isn’t exactly a new concept, but 2021 saw it go from far-off possibility to actual reality several times over. While multiple factors drove these innovations, there are a few names that each play significant roles within their own companies. First, there’s mogul Richard Branson’s space exploration wing, Virgin Galactic. Then there’s Amazon founder Jeff Bezos’ company, Blue Origin. Rounding out the trio is electric car magnate, and regular competitor for Bezos’ title of richest man on the planet, Elon Musk and his endeavor, SpaceX.

While the road to these milestones was marked by several missteps, including government lawsuits, misguided expectations and a few failed launches, the year set several new high-water marks that will likely change our perception of space from now on. Here’s a look at how the Big Three of space tourism each fared this year.

See: 6 Holidays Purchases That You Should Only Make at CostcoGood To Know: 4 Costco Items That Have Remained Cheap for Years

Richard Branson’s company might not have made quite as many headlines as rival companies SpaceX or Blue Origin over the year. However, his company, Virgin Galactic, did take the first-ever suborbital human spaceflight in history.

On May 22, SpaceShipTwo VSS Unity launched from New Mexico’s Spaceport America with two astronauts on board, Frederick Sturckow and David Mackay. The craft reached a speed of Mach 3 and an altitude of 55.45 miles.

This was followed by a second flight, which included Branson and three other Galactic employees, on July 11. The Unity reached an altitude of just over 53 miles during this follow-up launch, which completed the company’s “Unit 22” mission. While it was the craft’s 22nd mission, it was only its fourth time in space and was designed specifically as a template for future space tourism flights by the company.

These future flights, many of which are already reserved, once came at a cost of $250,000. Now, however, the company will be charging $450,000 a seat for a flight. Branson had said that the weightless portion of the flight was a particular focus for the company to try and enhance.

The same month Branson traveled to space, Amazon founder Jeff Bezos also traveled to space via his company, Blue Origin. Also focused on an (eventual) space tourism industry, Bezos traveled with three other passengers, including his brother and 18-year-old Dutch physics student Oliver Daemen, the youngest person to travel to space (who had also never bought anything from Amazon before). Daemen was actually a last-minute replacement. The final seat on the flight had been up for auction and, according to Blue Origin’s website, registered more than 7,500 bids from 159 countries. The highest bidder spent $28 million for their ticket but couldn’t go — their excuse? They were just too busy.

The Blue Origin craft, New Shephard, launched in west Texas on July 20, traveling 66.5 miles above the Earth before returning by parachute. At a press conference after their successful landing, he said that his “expectations were high, and they were dramatically exceeded.”

The New Shephard would launch again on October 13, with actor William Shatner aboard. Famous for his role as Captain James T. Kirk on the long-running sci-fi franchise Star Trek, Shatner was similarly emotional about the experience. “Everybody in the world needs to do this. Everybody in the world needs to see… it was unbelievable,” he said, before comparing the experience to what death might be like.

On December 11, New Shephard launched for a third time with six passengers aboard, the amount the craft is designed to hold.

Tips: How To Resist the Temptation of Overspending During the Holidays

Elon Musk’s Tesla is known for changing the landscape of the auto industry, and he’s been looking to do the same with his own space tourism endeavor, SpaceX. On September 16, the company launched its Inspiration4 mission, the first orbital spaceflight with only private citizens on board.

Launching from the Kennedy Space Center in Florida, it dwarfed the prior space outings by comparison, traveling more than 360 miles from the Earth’s surface — or higher than the International Space Station. The craft stayed in orbit for nearly three days before returning to Earth. Specifically, the Atlantic Ocean.

The flight was privately chartered by billionaire Jared Isaacman, which was all part of his effort to raise more than $200 million for St. Jude Children’s Research Hospital, $100 million out of his own pocket.

Helpful: The Best Type of Store To Shop For Holiday Gifts by Age Bracket

While 2021 saw innovations for space tourism on several fronts, it wasn’t the first year the concept had been employed. That honor goes to the Soyuz MS-20, a Russian spacecraft that transported Canadian billionaire Guy Laliberté to the ISS back in 2009. The Soyuz returned to that business in December, launching a 12-day tourism mission to the ISS beginning on the 8th. Passengers included the Japanese art collector Yusaku Maezawa his production assistant, Yozo Hirano. Though it’s unclear how much the latter paid for the trip, CBS reports that NASA has paid more than $4 billion for seats on Soyuz since 2006.