The Price of Steak is Going Down — Here’s Why 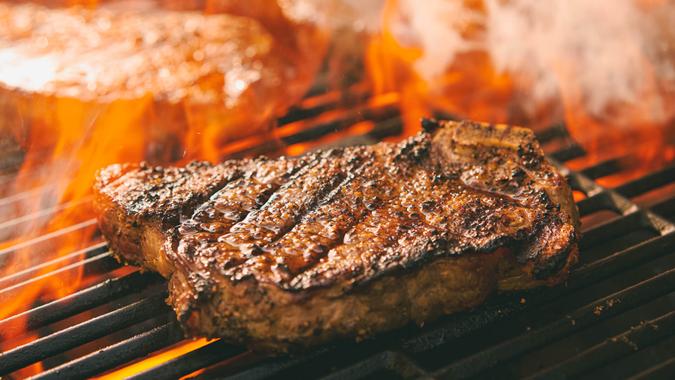 Planning a Labor Day BBQ? You may want to switch things up with some steak instead of the traditional burgers and hotdogs — you might just save a few dollars.

See: Do’s and Don’ts of Dollar Store Shopping
Find: 8 Costco Frozen Foods That Give You the Best Bang for Your Buck

The price of raw steak fell 1.5% in July on an annualized basis and fell one percentage point from June, data from the Labor Department shows. The drop in price appears to be the result of a change in consumer behavior. Because inflation has pushed the price of beef and other foods so high, shoppers have learned to live without steak — particularly the more expensive cuts such as rib-eye and striploin. As a result, these cuts are now seeing significant price drops in response to lower demand and a return of processing plant staff, per The Wall Street Journal.

According to Fox News, in an earnings call earlier this month, Donnie King, CEO of Tyson Foods — one of the world’s largest producers of beef, chicken and pork — said that though “consumer demand for protein remains relatively steady,” shoppers are moving away from premium cuts of beef and pork to more cost-efficient meats like chicken.

Further, consumers are still buying ground beef which, though cheaper than steak, is still soaring in cost — up 9.7% from a year ago. Prices are expected to rise further as farmers sell off and liquidate cattle herds in response to the severe drought afflicting much of the country.

SNAP Benefits: How Long Do They Last?
More: What Is the Highest Income for Food Stamps in 2022?

The most recent cattle report from the U.S. Department of Agriculture shows the total cattle inventory has fallen 2% since July 2021, and stock could drop further as the drought persists.