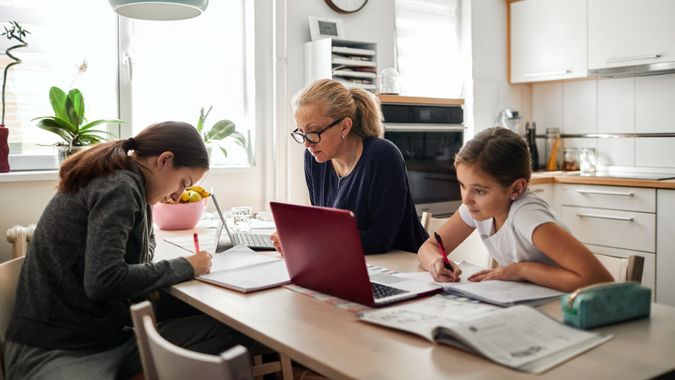 Women already were behind men in the workplace when it comes to pay and position, and the COVID-19 pandemic seemingly has pushed women further behind in the past year. Layoffs and a lack of affordable childcare to allow women to work combined to drive them from the job market. In the year that has passed since the virus was declared a pandemic, women’s participation in the workforce has dropped to its lowest number since 1988, according to the National Women’s Law Center.

Read More: The Unexpected Costs of Remote Learning for Families

Once the pandemic is over, women will return to a changed workplace and a labor force that looks different from the way it did a year ago. Just what has been the impact of COVID-19 when it comes to women and their jobs, especially to working mothers?

“Women have left the workforce by the millions, and it will set back women for at least a decade,” said Emiliana Guereca, the founder and CEO of Women’s March Action.

In the News: Melinda Gates Calls for Family Medical Leave

In fact, the National Women’s Law Center reported in January that more than 2.3 million women have left the labor force since February 2020, dropping the number of women who are working or seeking a job to 57%. That’s compared to the nearly 1.8 million men who departed the workforce in the same time span.

Job website Indeed surveyed 609 working women to look at how the pandemic impacted their jobs and uncovered the following:

“One of my offices lost three full-time female employees due to school closures, childcare issues and/or the caring of elderly parents,” Guereca said. “I have yet to see any of the male co-workers quit over childcare issues.”

See: Women’s Savings Are Shockingly Low – Inside the Gender Money Gap Made Worse by COVID-19

In January, the Pew Research Center released the results of a survey of parents of both genders, conducted in October 2020. Among the respondents, 52% of working parents with kids younger than 12 said it had been “somewhat difficult” or “very difficult” to handle childcare during the pandemic. Women were more likely to say it was difficult, outweighing men 57% to 47%.

Even women who stayed in the workforce and transitioned to working from home have felt the impacts of childcare issues, with 66% responding that they have a lot of to cope with where children are concerned. And those issues have led to distractions, with 54% of mothers saying they couldn’t give 100% to their jobs.

Related: 48% of Women Don’t Want to Go Back to Work in the Office Full Time

Some mothers reported that has cost them the chance to advance at work, too. Among moms, 34% said they had to reduce their hours, 15% rejected an important assignment and 9% turned down a promotion because they had children. And they said their supervisors noticed, with 19% of working moms saying they were treated as if they weren’t committed to their work, 11% saying an important assignment wasn’t given to them and 9% of them attesting to being passed over for a promotion.

For working mothers, the consequences of the pandemic will be lasting to a family’s finances, and the changes need to be addressed as we enter the second year, said Jody D’Agostini, Equitable Advisor and senior partner at The Falcon Financial Group, LLC.

“Women account for 53 to 68% of family or informal caregivers, according to the Family Caregiver Alliance,” she said. “While many women take on this role, becoming an informal caregiver can also bring about unintended financial consequences, such as leaving your job or fronting the cost of care. Leaving a job can be an initial shock due to the loss of income, and it can also have a long-term impact if you’ve also lost benefits as a result or are foregoing 401K contributions with an employer match.”

Working moms need to have “the money” talk with their partners as their hours, job duties and income change, if they haven’t already, she said.

“In many households, women still run the household finances, and in fact, most women will be solely responsible for their finances at some point in their lives,” she said. “However, women are still plagued with taboos associated with talking about money. Eliminating these money taboos starts with instilling confidence and increasing comfortability with money discussions, so women are prepared for the years ahead.”