You can’t deny the fact there’s a discouraging wealth gap in America. The wealth of the richest families has been growing at a faster pace than it has for the rest of the population, according to a 2016 Congressional Budget Office report. In fact, the bottom 25 percent of Americans have seen their wealth decline.

Before Robbins became a successful entrepreneur and best-selling author, he grew up poor and often went to bed wondering whether he’d have anything to eat the next day. But, he overcame adversity to become the nation’s No. 1 life and business strategist and is now worth an estimated $500 million.

GOBankingRates had the chance to speak with Robbins in an exclusive interview before the Feb. 28 launch of his new book, “Unshakeable: Your Financial Freedom Playbook.” A companion to his 670-page best-seller “Money: Master the Game,” “Unshakeable” boils down advice from legendary investors and experts into a playbook that can be read in a weekend. This book is one of our favorite personal finance books.

Robbins shared some of the tips from his book with us to help you create a plan and take control of your finances. Keep reading to see some of his best strategies to build your wealth. 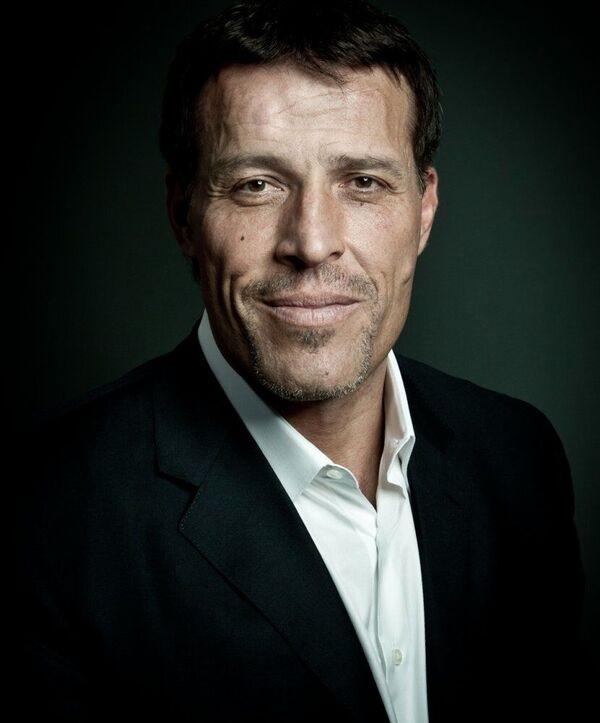 Stop relying on the mindset that you can only earn your way to wealth.

If you want to get rich, stop believing that you’ll only become financially free if you earn a high income.

Believe it or not, investing can put you on the path toward wealth. And the best part is you don’t need a lot of money to invest — even small amounts can grow to a fortune.

Robbins used the example of a UPS driver to prove his point. The driver never made more than $14,000 but he invested 20 percent of his income every year, and the money compounded, Robbins said. Over time, the money he invested grew to $70 million.

“When you tap the power of compounding, the game changes,” said Robbins.

The longer you wait to start investing, the more you will have to set aside each month to save $1 million for retirement or reach your other financial goals.

Become an owner of the economy instead of a consumer.

Many people don’t invest because they don’t think they can afford to set aside any money. But that’s where they’re wrong.

You can do this easily by setting up automatic contributions to a retirement plan at work or an investment account. Start small, then increase the amount you invest every time you get a raise or bonus.

“When you get a 15, 20 percent savings rate and you put it in a place where it’s compounding, you’re going to be financially free,” said Robbins.

You also have to make sure high fees aren’t eating into your investment returns. In “Unshakeable,” Robbins likens fees to sailing off into the sunset in a boat with a hole that’s taking on so much water that it will sink before it reaches its destination. Imagine that destination is your dream retirement in paradise — and the holes in your boat are investment fees.

“They have the exact same stocks, they have the same equity,” said Robbins. “The only difference is one paid 2 percent more in fees, and they have half as much money.”

One way to avoid high fees is to invest in low-cost index funds that track a major index, such as the S&P 500, rather than actively managed mutual funds, which have higher fees to pay the managers who pick the investments for the funds. Plus, as Robbins writes in “Unshakeable,” index funds typically outperform actively managed funds.

To see how the fees in your 401k plan compare with others, Robbins recommended using the free fee checker at ShowMeTheFees.com. You can forward the results to your plan administrator to push for lower fees.

Focus on the facts, and let go of the rest.

Although investing can help you build your wealth, many people are afraid they’ll lose money in the stock market. In fact, Robbins said one of the main reasons he wrote “Unshakeable” is because people are fearful about the market and economy. And that fear might even escalate.

Robbins pointed out the stock market has been rising for nearly eight years, but there will likely be a downturn at some point.

But, you can combat that fear by removing emotions from your decision-making and focusing on the facts. That’s what Robbins did when he found out he had a brain tumor and was facing his “deepest level of uncertainty.”

Robbins writes in “Unshakeable” the doctor told him he needed surgery to remove the tumor. However, the surgery posed a serious risk: his endocrine system could suffer damage, which would leave him with less energy. For Robbins, that was unacceptable. “This was a price I wasn’t prepared to pay,” he writes. “My mission of helping people to transform their lives requires tremendous energy and passion.”

Another doctor suggested Robbins fly to Switzerland twice a year to get injections of an experimental drug that wasn’t approved in the U.S. When Robbins asked this doctor what would happen if he didn’t take the drug or get surgery, the doctor said he didn’t know.

“If you don’t take it, you can’t be certain that you’ll survive,” the doctor told Robbins. 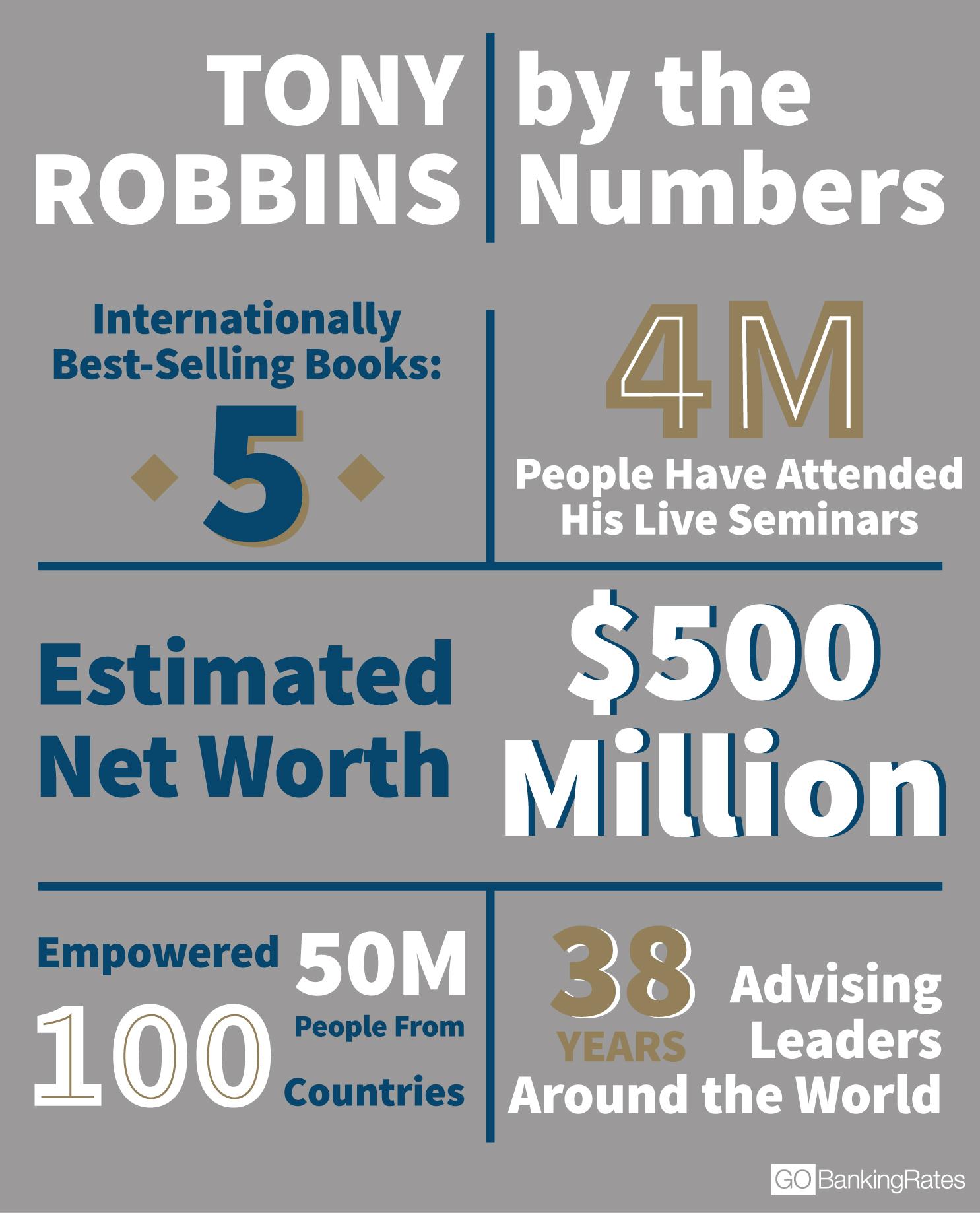 But at that point, Robbins no longer felt uncertain. He didn’t want to have a high-risk surgery or take an experimental drug. And there was no evidence that his health had deteriorated in the 14 years he had the tumor. So, he decided against both options and opted to get tested every few years to see if the tumor had grown. He became unshakeable by finding certainty within himself, he writes.

You can find certainty within yourself and get over your fears, too — especially when it comes to investing. Robbins said you just have to educate yourself. After all, being unshakeable isn’t about positive thinking; it’s about “understanding the facts that can separate you from all the fearful people.”

For example, did you know that after the stock market experiences a downward trend, history proves it will likely experience an upward trend, called a bull market? If you understand that putting your money in the market and keeping it there — even when it’s going through a downturn — can pay off in the long term, you’ll be less fearful and more successful.

“When everybody else is scared, you want to be able to take advantage like Warren Buffett does,” said Robbins. “You don’t need a lot of money to do that. You just have to not be living in fear and know the facts.”

Stay in the market and profit from downturns.

People find it hard to stay in when the market is falling. However, to achieve wealth, you have to get in the market — and stay there.

“What is everybody afraid of? ‘I’m going to lose money in the market,'” said Robbins. “The stock market has never taken a dime from anybody. You take out your dime by selling.”

The truth is investors do more harm to their returns trying to time the market by jumping in and out. “In a 20-year period, the S&P 500 produced an 8.2 percent return,” said Robbins. “If you were out of the market for just 10 of the best days … your return was cut in half, from 8.2 percent to 4.5 percent.”

To make matters worse, if you sell stocks when the market is down, you lock in your losses. 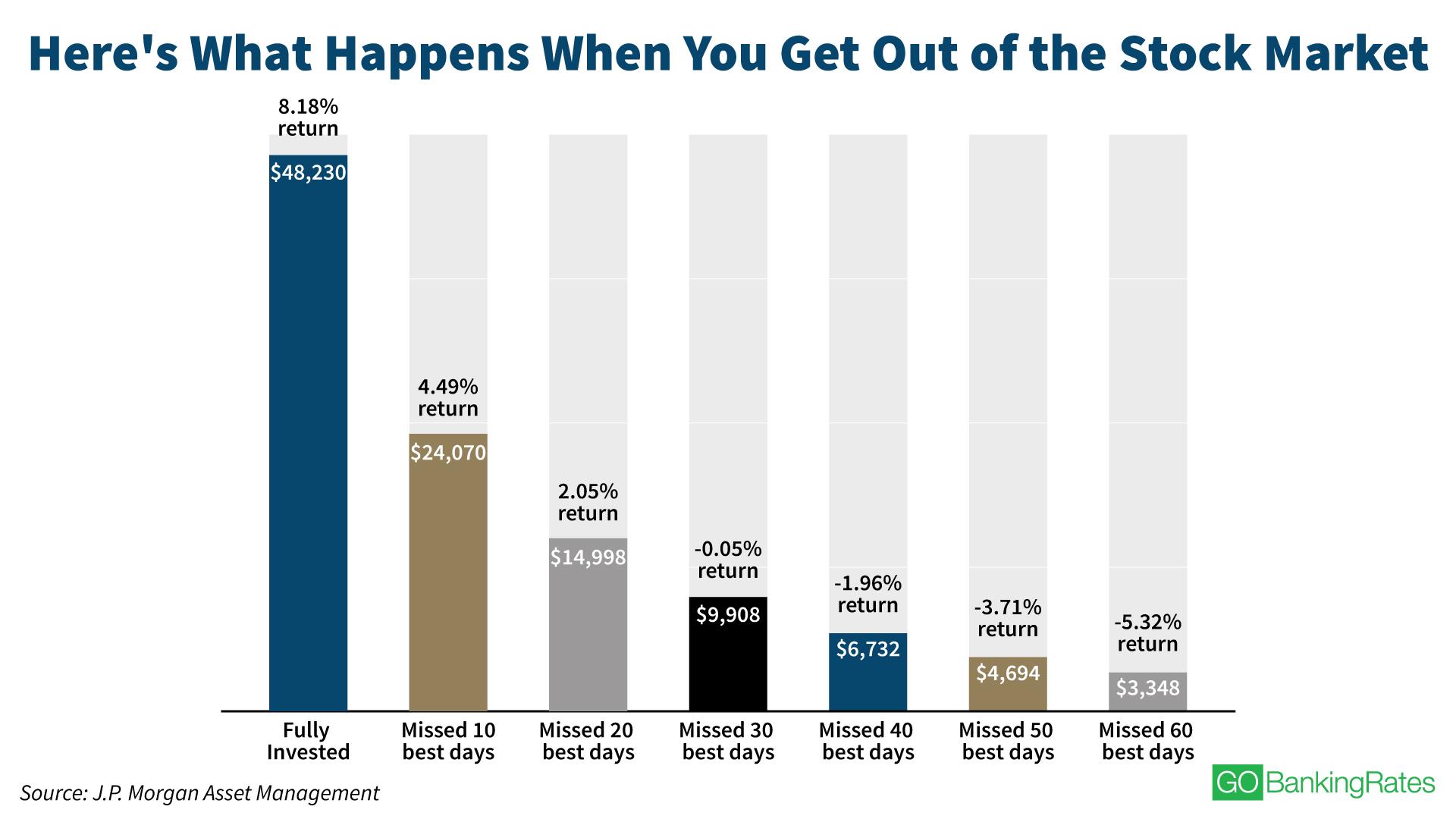 Instead of selling when the market is down, take advantage of stocks’ lower prices to buy more. “There’s no greater time than winter, than a bear, than a crash to leapfrog financially from where you are to where you want to be,” said Robbins.

Diversify your assets to protect your wealth.

Investing in index funds is a good place to start, Robbins said. But you have to diversify to truly be unshakeable when the market drops.

“You don’t want everything in the stock market,” he said. “You need diversification across different asset classes, different types of assets.”

In “Unshakeable,” Robbins gets Peter Mallouk to weigh in with his diversification strategy. Mallouk is president and chief investment officer of Creative Planning, which was named the No. 1 independent investment advisor in America three years in a row by Barron’s. Mallouk advises long-term investors to put a good portion of their investments in the stock market because it almost always rises over a 10-year period.

Because achieving the right asset allocation can be tricky, Robbins recommends hiring a financial advisor. Ideally, you should work with a fiduciary, who has a legal obligation to put a client’s interests first. 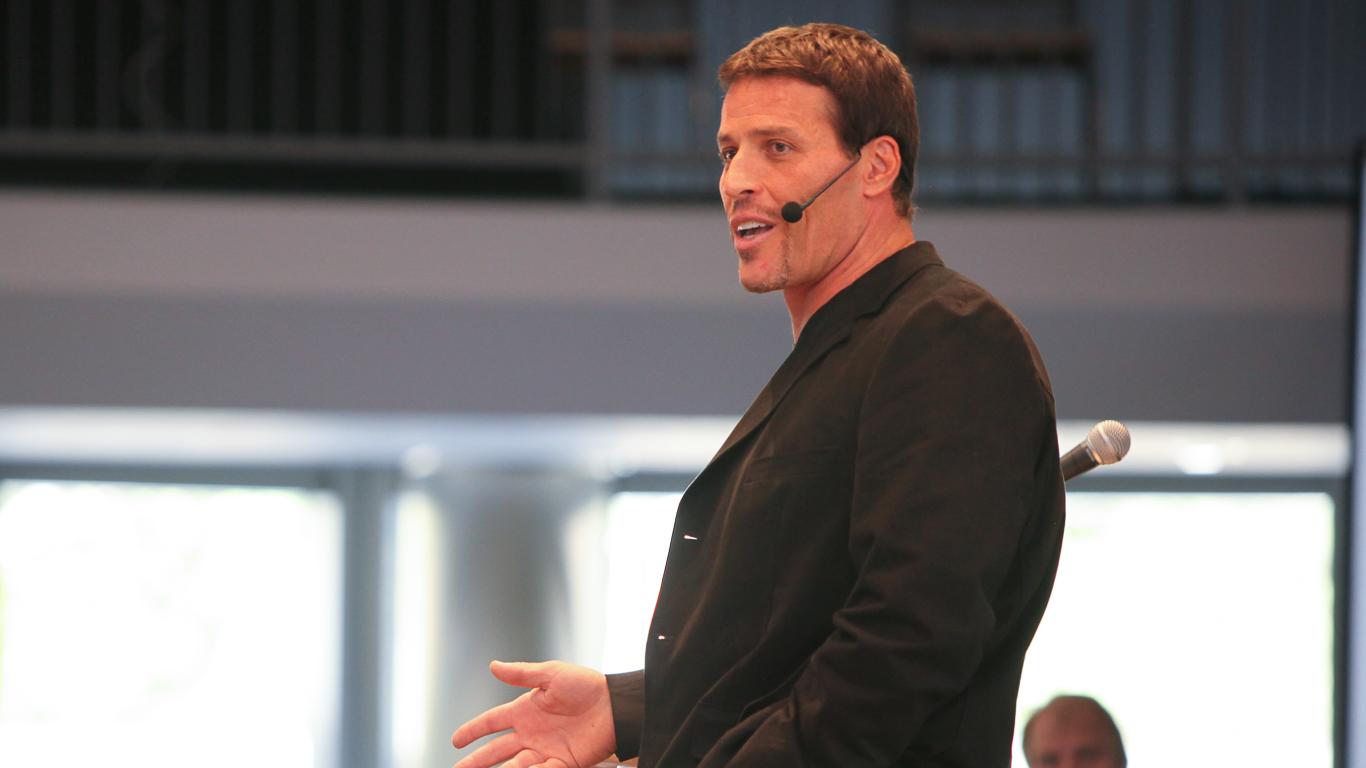 Stay unshakeable even during times of uncertainty.

You can apply all of Robbins’ tips for achieving wealth and becoming unshakeable at any time. However, his strategies are especially true in times of uncertainty, which the U.S. is facing now with a new presidency and unpredictable markets.

During our interview with him, Robbins recalled a recent meeting he had with former President George W. Bush.

“I said, ‘What do you think about what’s going on?'” said Robbins. “He said, ‘Tony, I’ll tell you straight. When Nixon was being kicked out of the White House, leaving the country, I thought he’d destroyed the country. And he didn’t. You know what I’ve learned?’ He said the office is bigger than the occupant.”

So as the markets grow, make sure you’re not sitting on the sidelines missing out. “Just take a small amount of money, set it aside, automate it,” said Robbins. “Put together the right asset allocation, get in the game and go live your life. And have a plan for when things drop so you’re not overreacting to it. The overreaction is where you’ll lose money — not anywhere else.”

Up Next: 13 Ways Tony Robbins Spends His Money 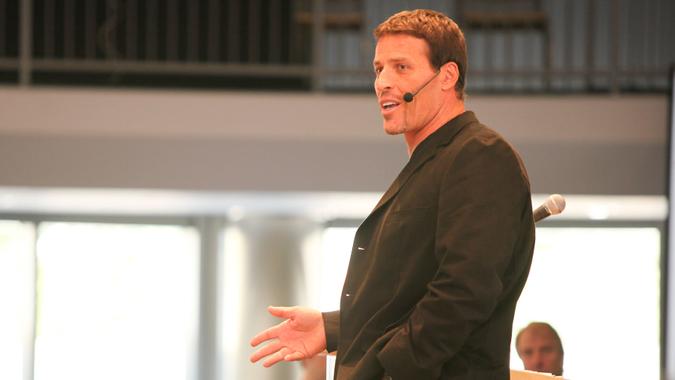