Nicki Minaj’s birthday is Dec. 8 and the outspoken rapper will turn 35 years old. As the first woman to top both hip-hop and pop charts, Minaj has worked extremely hard to get where she is today. Find out how her talent and drive led her to become one of top musical performers and the highest-paid female rapper in the world.

Minaj is not only the highest-earning female rapper in the industry, she’s also one of the top-grossing artists, despite not releasing an album since 2014. She brought in $20.5 million in 2016, according to Forbes, and was the only female artist to earn a spot on its Cash Kings 2016: Hip-Hop’s Highest-Earning Acts list.

In addition to being a skilled performer, Minaj is also a savvy businesswoman, which has added to her net worth. She’s scored big-name endorsement deals with Pepsi, OPI, MAC Cosmetics and Myx Fusions Moscato that have likely earned her millions. In April 2015, she received an estimated $300,000 to $500,000 paycheck for performing at a bar mitzvah in New York City. Floyd Mayweather Jr. also paid Minaj $50,000 just to show up at his daughter’s 14th birthday party in 2014 and hang out for an hour — no performance involved.

Minaj was one of the “American Idol” judges during season 12 of the show, along with Mariah Carey, Keith Urban and Randy Jackson. Her stint on the judge’s panel lasted just one season — and much of her time was spent feuding with Carey — but she earned an estimated $12 million for her time.

The multitalented Minaj has also tried her hand at acting. She made her silver screen debut in the 2014 film “The Other Woman” and played the role of Draya in “Barbershop: The Next Cut.” Nicki’s even had her own show, “Nicki,” in the works with ABC. The autobiographical comedy started filming in January 2016, but the project has since been put on hold.

Despite enjoying a multifaceted career, her success can be directly attributed to her music. Nicki Minaj’s payout for her 2010 debut album “Pink Friday” was an estimated $1.89 million, followed by $859,000 for “Pink Friday: Roman Reloaded.” She released her third studio album “The Pinkprint” at the end of 2014. Although her earnings have not been made public, the record has sold more than 2 million copies. Some of the top Nicki Minaj songs include “Anaconda,” “Super Bass,” “Starships” and “Only.”

In 2015, Minaj embarked on a 19-stop “The Pinkprint” North American tour, with special guests Meek Mill, Rae Sremmurd, Tinashe and Dej Loaf. This was her first extensive tour of the U.S. and Canada since her 2012 Pink Friday Tour, and tickets cost an average of $193.78, according to TiqIQ.

Although she can certainly rock the stage on her own, Minaj has collaborated with many big names, such as Lil Wayne, Drake, Ariana Grande, Chris Brown, Beyoncé and Meek Mill. She joined forces with Ariana Grande and Jessie J for the hit song “Bang Bang,” which earned the No. 27 spot on the 2014 Billboard Hot 100 List.

In 2016, she teamed up with Grande again and was featured on the single, “Side to Side,” which was released on Aug. 30. The song reached No. 4 on the Billboard Hot 100 List. The duo also performed the hit at the 2016 MTV Video Music Awards and the American Music Awards.

Minaj’s collaboration verse on Kanye West’s “Monster” was considered “the best rap verse of the 2010s” by Complex magazine.

Slim Shady Throws Down: Eminem’s Net Worth on His 45th Birthday

Born in Saint James, Trinidad and Tobago, Minaj was originally known as Onika Tanya Maraj. She remains the only woman to ever be featured on the Forbes Hip-Hop Cash Kings list, landing herself a spot beginning in 2011.

Minaj’s cousin, Nicholas Telemaque, was murdered in July 2011 near his home in Brooklyn, and Minaj references his death in numerous songs.

Since 2000, Minaj was linked with rapper Safaree Samuels but the couple split in late 2014. In early 2015, she became romantically involved with troubled rapper Meek Mill, but the two split in January 2017.

Cash Rules Everything Around Me: 20 Outrageous Purchases That Led Kanye Into Debt

Known for her fierce and sassy attitude, Minaj has found herself at the center of multiple controversies throughout the years.

Nicki’s most famous feud surfaced over a decade prior, between her and fellow female rapper Remy Ma. In 2007, when Minaj released a freestyle record “Dirty Money,” Remy Ma confronted her about lyrical content featured in the song. Minaj never confirmed nor denied that the song was written about Remy Ma, and the fellow rapper was quoted in a 2010 interview saying, “To this day I still feel like [the song] is a stab at me. I’m gonna [diss Minaj] back for that one.” In 2017, Remy Ma released the diss track “Shether” in retaliation.

In October 2015, Minaj enraged the disabled community by pretending to cast a spell on a woman in a wheelchair and telling her to walk, while hosting a Halloween party dressed as a fairy. She responded to the backlash on social media by claiming the wheelchair-bound person is a friend and not actually disabled.

At the 2015 American Music Awards, host Jennifer Lopez started the event by dancing to the year’s hottest hits. As Lopez began dancing to “Anaconda” the camera panned to Minaj revealing a not-too-amused facial expression. This sparked a meme based on Minaj “throwing shade” at Lopez, though Minaj claims that wasn’t the case.

She also famously argued with Taylor Swift on Twitter before the 2015 MTV Video Music Awards and sparred with host Miley Cyrus at the show during her acceptance speech. And a few months earlier, she insulted rapper Lil’ Kim at the BET Awards.

Nicki has made it clear that she’s not afraid to speak her mind, and fans can’t get enough of her music and her passion, which has resulted in a number of memorable Nicki Minaj quotes. As she said in her 2014 BET Awards acceptance speech, “I don’t care what anybody gotta say. I’ma do me, I’ma do me.”

Up Next: 8 Money Tips From Macklemore’s ‘Thrift Shop’ and His Lifestyle 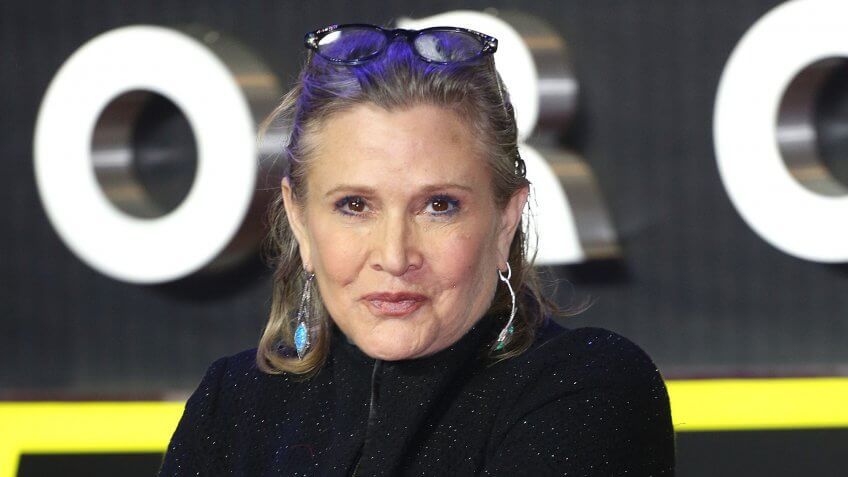 The Incredible Career, Fame and Fortune of Carrie Fisher

Learn about the legacy of the woman behind Princess Leia.