How Rich is Val Kilmer? 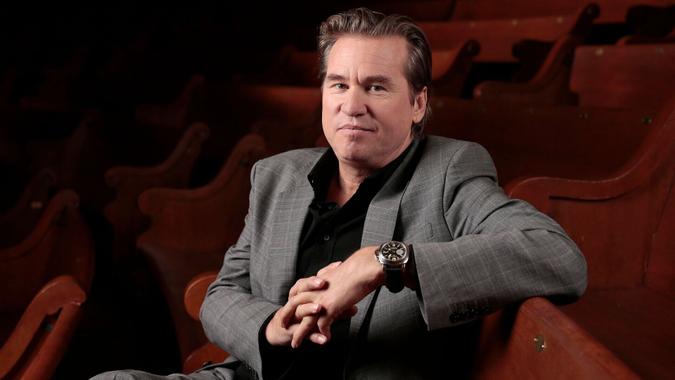 Val Kilmer, 62, is an American actor who made a name for himself in Hollywood in the late 1980s. Now, Kilmer is revisiting a character that helped catapult him to fame: Iceman from “Top Gun.”  With the sequel, “Top Gun: Maverick,” launching on May 27, Kilmer will be once again be appearing on the big screen. The original “Top Gun” earned $345 million globally; it remains to be seen how the sequel will fare.

In recent years, his health has been keeping him in the news, as he had been undergoing treatment for throat cancer since being diagnosed in 2015.  While he has been in remission for many years, he underwent a tracheotomy during treatment — a procedure which removed his ability to speak. With the aid of technology (AI technology), however, his voice has been restored, per People.

Kilmer has starred in over 100 films and TV shows since his debut in 1983. Some of his most famous projects include: “Willow,” “The Doors,” “True Romance,” “Tombstone,” “Heat,” “The Island of Doctor Moreau,” “At First Sight,” “The Saint,” “Batman Forever,” “Alexander” and “Kiss Kiss Bang Bang.” He has provided voice talent for many video games and has written a book of poetry, as well as an autobiography. A documentary about his life, “Val,” was released on Amazon Prime in 2021.

He spent the ’90s as one of the world’s highest paid actors and now has an estimated net worth of $25 million, according to Celebrity Net Worth.

Val Edward Kilmer was born to Gladys and Eugene in Los Angeles, California, on Dec. 31, 1959.  He attended Chatsworth Charter High School in the San Fernando Valley before becoming the youngest person to be admitted to Juilliard School’s Drama Division.

While at Juilliard, he co-wrote and starred in a play titled “How It All Began” that appeared at the New York Shakespeare Festival. His first television role came in 1983 as a co-star in an episode of an ABC Afterschool Special titled “One Too Many.”  The following year, Kilmer landed his first starring role in the comedy “Top Secret.”

Kilmer had many high profile relationships, but he has only been married once — to actress Joanne Whalley, his co-star in “Willow.” They divorced in 1996, but share two children together.